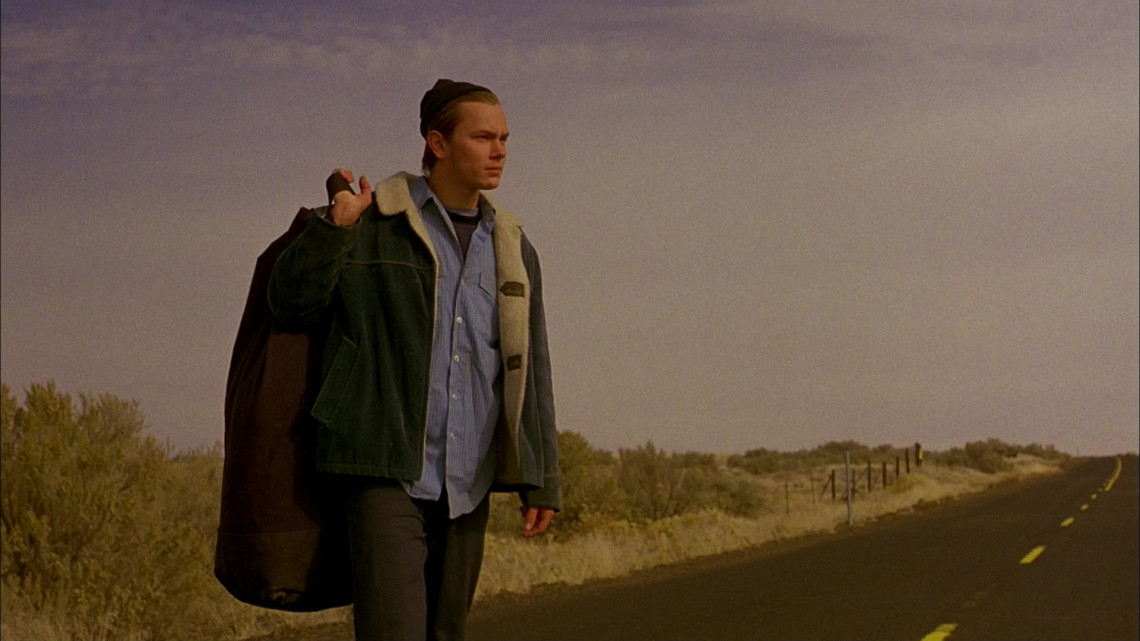 To watch My Own Private Idaho (1991) is to bask in the freedom and horror of the open road and its unpredictable rhythms and patterns. Molded by an imperfect, rough conceit, writer-director Gus Van Sant’s third directorial effort stands as an obvious precursor to what the director would later tackle thematically during the late 1990s and well into the aughts. Though films such as Gerry (2002), Elephant (2003) and Last Days (2005) signify an unofficial trilogy of death, My Own Private Idaho captures Van Sant working within the revisionist road movie genre and without the clinical control seen in his aforementioned efforts; instead, Van Sant’s treatise on youth and queer culture remains delicate and empathetic, clear substitutes and early placeholders for what would come to define Van Sant’s work as it continued to evolve.

Loosely based on Shakespeare’s Henry IV, the film opens with gay street hustler Mike Waters (River Phoenix) standing along a barren two-lane highway in Idaho with little to greet him except for animal sounds and memories of his mother. “There’s not another road anywhere that looks like this road—I mean, exactly like this road. It’s one kind of place. One of a kind, like someone’s face. “Like a fucked-up face,” says Mike, before passing out in the street due to his severe narcolepsy. He eventually wakes up and finds himself in Seattle on the receiving end of a blowjob from a heavyset john. Throughout, Van Sant shoots the sex scenes as little more than a trade for its leads, twice using still shots, and resorting to facial expressions during a climax.

Mike is a man without a country until he meets the rebellious son of the mayor, Scott Favor (Keanu Reeves), another young prostitute who’s resorted to this lifestyle to piss off his disapproving father. Scott brings the homeless Mike along with him to Portland where they reunite with Bob Pigeon (William Richert), a middle-aged mentor to a gang of street kids and hustlers who live in an abandoned apartment building. In between turning tricks and sleeping with other johns, Mike and Scott spend their days hanging out in parks with Bob’s street denizens and sleeping under tarps. For fun, they dress in oversized pink gowns and mess with a group of indie-music promoters, an interlude and platform for the cast of young upstarts and non-actors to let loose and perform off-the-cuff.

The film’s theatricality creates spells of tedium and inertness, often undercutting the drama of Mike and Scott’s time together. Both Phoenix and Reeves awkwardly handle the Shakespearean dialogue but it’s the former who manages to deliver an alive, sensitive performance full of rich subtlety. His tall greasy hair, hint of facial acne and slender build recall that of James Dean, but Phoenix plays Mike as far less confident, a wayward soul in search of intimacy and motherly comfort. Scott is more of a caregiver, though only to a certain extent, shepherding Mike on a journey back to Idaho (and soon Italy) to find his mother. Reeves has perhaps never been more relaxed and at peace with his body, playing the hedonistic Scott as a free spirit who can’t quite reciprocate Mike’s love for him. Their relationship can only go so far as Scott eventually climbs the latter of social hierarchy via a handsome inheritance after his father’s death.

For such a wildly ambitious project that finds Van Sant at his most naked behind the camera, there exists a lack of sustained drama and intimacy. If capturing ‘90s aimlessness in full stride was the clear objective, Van Sant passes with flying colors. However, for each diversion into poetic escapism (Van Sant employs striking time-lapse shots of roaming clouds) and non-sequitur sidebars (see a sequence in which a series of porno magazines featuring Mike and his friends start communicating together), My Own Private Idaho resembles a cornucopia of longing, vulnerability, and fallen brotherhood – a film largely about the absence of true pleasure and tactility that feels fully formed but only half-felt.

River Phoenix would succumb to a drug overdose just two years after the film’s release, echoing the short-lived promise of so many of his contemporaries. The film ends in a tug-of-war of hope and uneasiness as Mike finds himself once again passed out and stranded in the middle of the open road, his fate available to anyone or anything. Given what we now know about the actor’s real life fate, this ambiguous conclusion doubles as an unintended memorial for such a gifted talent. Even if the film doesn’t quite live up to its seminal status, it feels safe to say that with fifteen films under his belt, My Own Private Idaho finds Van Sant at his most eclectic and organic.

The visuals aren’t as crisp as one might expect, but this newly restored edition includes cleaner and more detailed photography than Criterion’s prior 2005 release. The color correction stands out as the most important fix, adding clarity and resolution to Van Sant and director of photography Eric Alan Edwards’s many elegiac interludes. The audio track is without noticeable fault, resulting in a more than competent transfer.

While most of the same extras remain from the 2005 edition, there’s still an embarrassment of riches to explore, most notably, a 53-minute illustrated audio conversation between Van Sant and director Todd Haynes that includes an overflow of insight into the film’s making and legacy. A lengthy interview with film scholar Paul Arthur adds proper context to the film’s Shakespearian linkage. In addition, the disc includes 6 deleted scenes, a trailer, a making of featurette, and a wonderful booklet featuring essays by film critic Amy Taubin and LeRoy; a 1991 article by Lance Loud; and reprinted interviews with Van Sant, Phoenix, and actor Keanu Reeves.