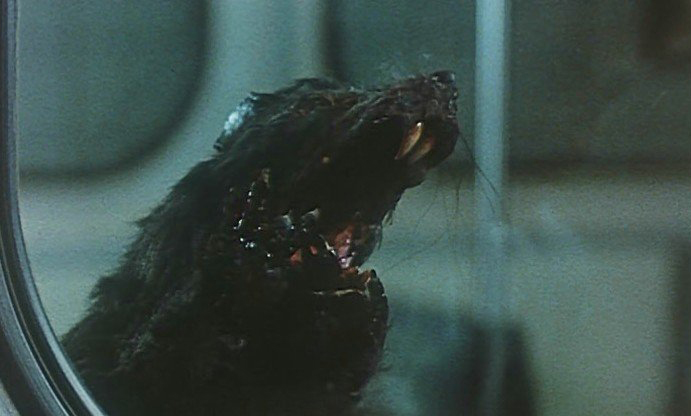 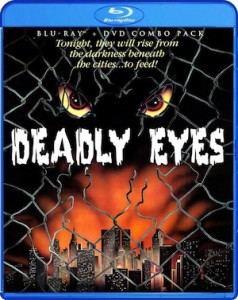 Oh, I’m sorry, I should have mentioned: the rats are played by costumed dachshunds.

There is something perennially fascinating about the way bad horror movies unfold. Scripts always seem to operate like they were crudely translated from another language, retaining the basics of narrative movement and human speech but…off, somehow. Everything is rushed, yet each scene drags on interminably, convinced that its absurd monsters are scary and that an overbearing score can induce suspense with nothing to back it up. Rats are always introduced with a burst of sound that resembles a shriek, yet whatever jolt it might contain is ruined by the head-scratching sound effects used to make the rats “speak,” a cross between pig squeals and big-cat roars.

People speak to each other like students perfunctorily reciting lines they were made to speak by a teacher. Confronted by the lust of cheerleader Trudy (Lisa Langlois), teacher and basketball coach Paul Harris (Sam Groom), standing naked after taking a shower in the gym, talks to her so casually that you’d almost think these were his normal office hours. Teenagers in general discuss sex like the promiscuous strawmen of various judgmental literature, a few shots of drug use away from simply bringing Go Ask Alice to life.

In no way is this a good film, but the sheer nonsense of it is compelling in its clumsiness. Watching a bunch of rats that are obviously dogs visibly tear at the masks on their face as Scatman Crothers bleeds out is something I can genuinely call a singular experience. Maybe it’s because this is a Canadian movie, but everyone involved seems to be in on how absurd it is without incessantly winking at the camera. That doesn’t excuse the stiffness of the venture, with its oddly-paced script, wooden performances or indifferent direction from Enter the Dragon-helmer Robert Clouse, all of which are tedious no matter the level of irony behind them. But if Scream Factory can sometimes revive films that might have been just fine staying dead, Deadly Eyes is certainly entertaining garbage.

Scream Factory occasionally puts forward some great transfers, but it’s more than understandable that they do not give obscure, minor titles like this the royal treatment. Deadly Eyes doesn’t exactly sparkle on Blu-Ray, but why on Earth would it? Lines, scratches and a perpetually soft image define the transfer, but it nonetheless looks clearer than I imagine it ever has, with decent black levels and consistent flesh tones. Audio is a similarly mixed bag, with the irritating score and rat sound effects pushed loud in the mix and dialogue often left muffled, even when there are no competing sounds.

The unexpectedly rewarding extras kick off with a featurette on the film’s laughable rat effects that spirals into a broader making-of documentary. Overall, it’s standard featurette material, but it reveals a sense of humor on behalf of everyone that supports the idea that no one took this too seriously, and it’s worth watching just for effects artist Alec Gillis to drop the bombshell that he went from dressing up dogs on this movie to helping come up with the dog-hybrid xenomorph from David Fincher’s Alien 3.

A batch of interviews with actors and crew are also included, none more interesting than that of Lisa Langlois, who plays Trudy. There’s often something tragic about the new interviews Scream Factory conducts for its releases: for every self-aware “star,” there’s always someone who uses this platform to stage the Inside the Actors Studio episode of their dreams. That’s somewhat the case here, but by far the most fascinating extra is an interview with Lisa Langlois, who starts off dropping knowledge that raises hackles until she starts listing credits with Claude Chabrol, John Huston, Hal Ashby, and a long, fantastic anecdote of nearly getting the Sarah Connor part in The Terminator. She offers tidbits about exploitative nude scenes, hard-earned experience, and she even closes out by encouraging young filmmakers and creatives to contact her on social media. It’s one of the best interviews I’ve seen Scream Factory get to date.

Richard Clouse’s entertainingly terrible rat film gets a modest A/V transfer but is elevated by a solid set of extras.