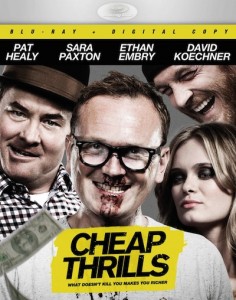 A commentary on the present whose instant cult appraisal may owe to its resemblance to pop culture past, Cheap Thrills is a pitchman’s dream. “It’s Indecent Proposal meets Fight Club!” “Trading Places with a pinch of Breaking Bad!” Like any B-movie worth its salt, the film is blissfully short and to the point: just-fired mechanic Craig (Pat Healy) and his old high-school buddy and current debt collector Vince (Ethan Embry) get drawn into a sick birthday game by rich couple Colin (David Koechner) and Violet (Sara Paxton), who pay the two to complete a series of increasingly harrowing dares for ever-larger payouts.

The film benefits immeasurably from its performers. Koechner excels at playing blustering buffoons who build up their overconfidence on foundations of sand. Given Colin’s seemingly limitless amount of spare cash, however, Koechner’s usually impotent posturing finds dangerously solid footing, giving him an edge backed up by Paxton’s detached, morbidly sensual observer. Embry has the lack of scruples of a working-class man with no attachments, not hesitating to leap at Colin’s first monetary dares before Craig can even figure out what is going on. Just as fast, he escalates to denying Craig opportunities to get ahead, punching his friend in the stomach to ensure he cannot beat his own time for holding his breath.

Healy, however, establishes dominance early and never cedes the spotlight. He looks so perfect for the role of a perfectly average, screwed-over member of the collapsing lower-middle class that Colin and Violet’s obvious glee at corrupting Craig may match the casting directors’ own at getting the actor. His unremarkable appearance makes the speed with which he draws out an inner savagery all the more perfect for the film. Vince may rush into the game, but it is Craig who truly takes it to the next level, propelled by something more than simple greed: responsibility to his family, and a need to overcome his failed promise.

So intense is Healy as Craig ruthlessly adapts to the increasingly violent and sadistic rules of the game that as much as the film relies on the actor, it also gets warped by his heat. The thematic premise is so obvious—the infinite level to which previously stable American classes will now sink for basic survival—that it requires a certain level of modulation to really stick. Once Craig gets the upper-hand in displays of fearlessness, however, he never cedes it back to Vince, whose petulant jealousy at being an also ran stops being amusing when it speaks to a single-minded narrative movement.

Cheap Thrills, like the demented couple who set it in motion, cares so badly to see a meek family man debase himself that it loses its finesse. Granted, E.L. Katz’s direction, with money-shot close-ups of half-severed digits and disgusting meals, itself latches onto the grimmest elements of the story, which somewhat dilutes the message by luxuriating in what it castigates. Too often, the film devotes itself to Craig’s actions, not the waves of self-revulsion that crash against the impenetrable wall of determination in his face as he resolves to commit them. It is there that Cheap Thrills speaks loudest.

Cheap Thrills is a dirty-looking film, but intentionally so, and Drafthouse’s transfer plays up its grime. The unforgiving digital cinematography, with its sharp definition of every gross detail, is rendered without errors. Audio is similarly solid; like the work of most first-time filmmakers, the soundtrack is more serviceable than integral, but overall the 5.1 mix is well-balanced between the pulses of the forgettable score and the dialogue, which maintains a level of aural space equal to the actors’ blocking around Colin and Violet’s home.

Chief among the handful of extras is a relaxed audio commentary by Katz and Healy. There’s also a 40-minute making-of doc that, frankly, seems like overkill for such a straightforward movie with an obvious message and no visual acumen to be broken down. And in a show of the film’s most enthusiastic audience demographic barreling past irony, a clip from a panel at Fantastic Fest shows audience members performing humiliating tasks on-stage, from getting a real, permanent tattoo to dipping testicles in hot sauce, for banal prizes. Never judge a film by its viewers, but the enthusiastic egging-on of the actors and director suggest that even for all their reverential talk of the script’s satiric brilliance, the ultimate thrust is lost on them, which may explain the movie’s shortcomings.