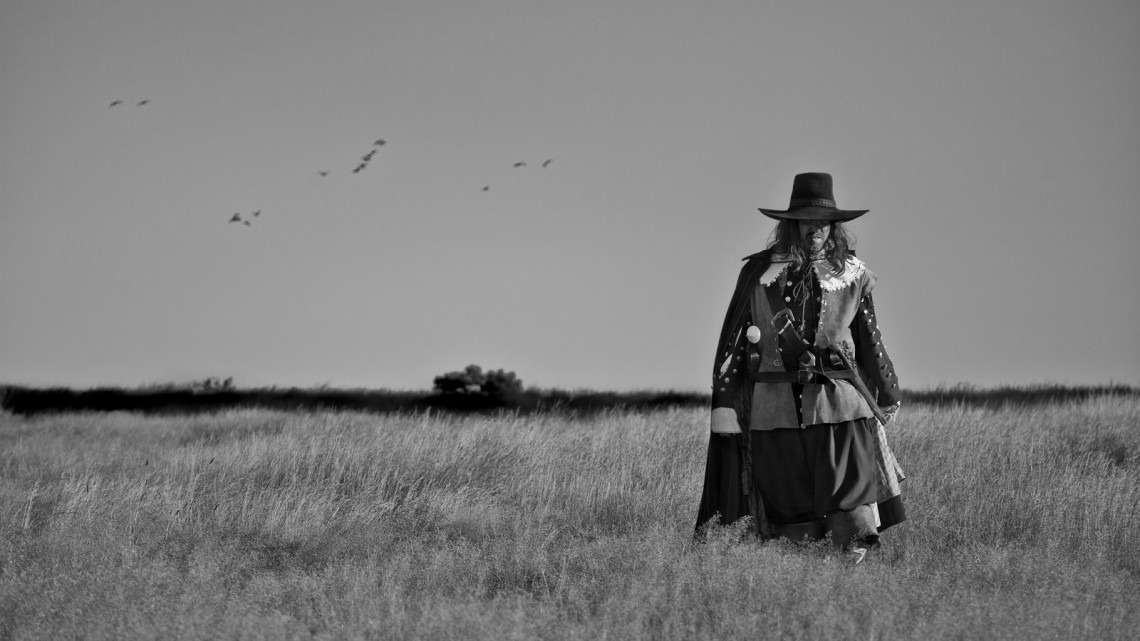 Blu-Ray Review: “A Field in England”

With its period setting during the English Civil War and its increasingly abstract visual schema, A Field in England is Ben Wheatley’s most ambitious film to date. The film retains Wheatley’s chatty, grimly humorous style, but where his other films slowly tilt off their axis, Field starts employing formal smudges early on, preventing any sense of comfort or even coherence before what narrative there is spirals out of control. We begin with rushed handheld shots through long grass as a craven alchemist’s assistant named Whitehead (Reece Shearsmith) flees from a vengeful nobleman who is subsequently cut down on the battlefield. Close-ups of Whitehead’s harried face set a precedent for the rest of the film, one that remains uncomfortably close to its characters, obscuring the journey upon which they embark.

Overuse of close-ups has become a hallmark of inept direction, an attempt to directly foreground character emotion that erodes the context around it. However, Wheatley’s close-ups take full advantage of this obfuscating effect, charging even banal moments of casual banter with a sense of unease and confusion. When Whitehead falls in with a trio of deserters—Jacob (Peter Ferdinando), Cutler (Ryan Pope) and “Friend” (Richard Glover)—the use of these excessive close-ups, many of which violate the 180-degree rule when edited together, reflects their mutual distrust and opportunism. Furthermore, the abrupt cutting between the characters anticipates the way most of their conversations end, with someone literally at another’s throat.

Soon, things go mental, with the men tugging one man, the rogue alchemist O’Neill (Michael Smiley) out of nothingness and setting into motion psychological torture borne out through a collapsing frame. Slow-motion sequences of everything from O’Neill ruffling the dust from his cloak with satanic flourish to Whitehead attempting to flee give actions a sickening, warped flavor, and the final act devolves into ultraviolence, along with an extended mushroom hallucination that tacks ‘60s psychedelic effects onto the 1600s. Eventually, the whole thing becomes an inscrutable Mobiüs strip, a sealed-off trip meant only to perplex. 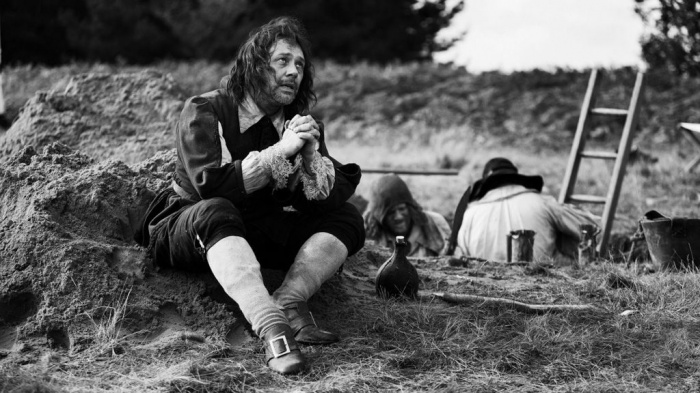 Yet of all the downturns into surreal horror that mark Wheatley’s films, this descent into madness is the least satisfying. By focusing so much energy on the odd presentation of the material from the start, the film bypasses any development of character or narrative direction that would give the psychedelic material genuine shock value. The highlights of A Field in England come from its most banal moments, where the direction is also at its deftest. The triangulated positioning of characters as the tease Jacob struggles through his private ailments to defecate among some reeds is a snapshot of Wheatley’s visual panache, his sick humor and his vulgar revisionism that says more than the last 30 minutes.

Similarly, examinations of diseased penises and the general filth have an impact that lingers beyond the empty freak-outs. Wheatley’s films trade in commentary but ultimately never seem to be about anything than their own winding, macabre paths, and that’s never more true than here. But with so little to latch onto, A Field in England perhaps acts too much like a drug trip: terrifying and beguiling in the moment, but a half-remembered, mostly regretted memory in retrospect.

Digitally post-converted black-and-white always stands out from traditional monochrome film for its slick polish and smoothed textures, but in the case of A Field in England, that only adds to the sense of constant discomfort. Drafthouse Films impeccably preserves this unreal image, and the accompanying audio track handles the leaps in dynamics with aplomb. The film regularly hops from numbed near-silence to white noise, and the audio never lets these intervallic jumps muddle the sound.

A commentary track with Ben Wheatley, producer Andy Starke and sound editor Martin Pavey is informational, but the crew’s chuckling over some of the more scatalogical jokes in the movie keeps things relaxed and informal. Most amusing is how even the filmmakers sound confused by what they made at points, unsure of what any of it means beyond its surface weirdness. Drafthouse’s disc also comes with a separate interview with Wheatley, test reels, a making-of featurette and a more in-depth series of featurettes that explore various facets of the production with greater focus. A booklet containing an additional interview with Wheatley and the film’s trailers round out the package.

A Field in England may not be Ben Wheatley’s most resonant film, but Drafthouse’s loaded package makes it one of the young home video label’s strongest releases to date.