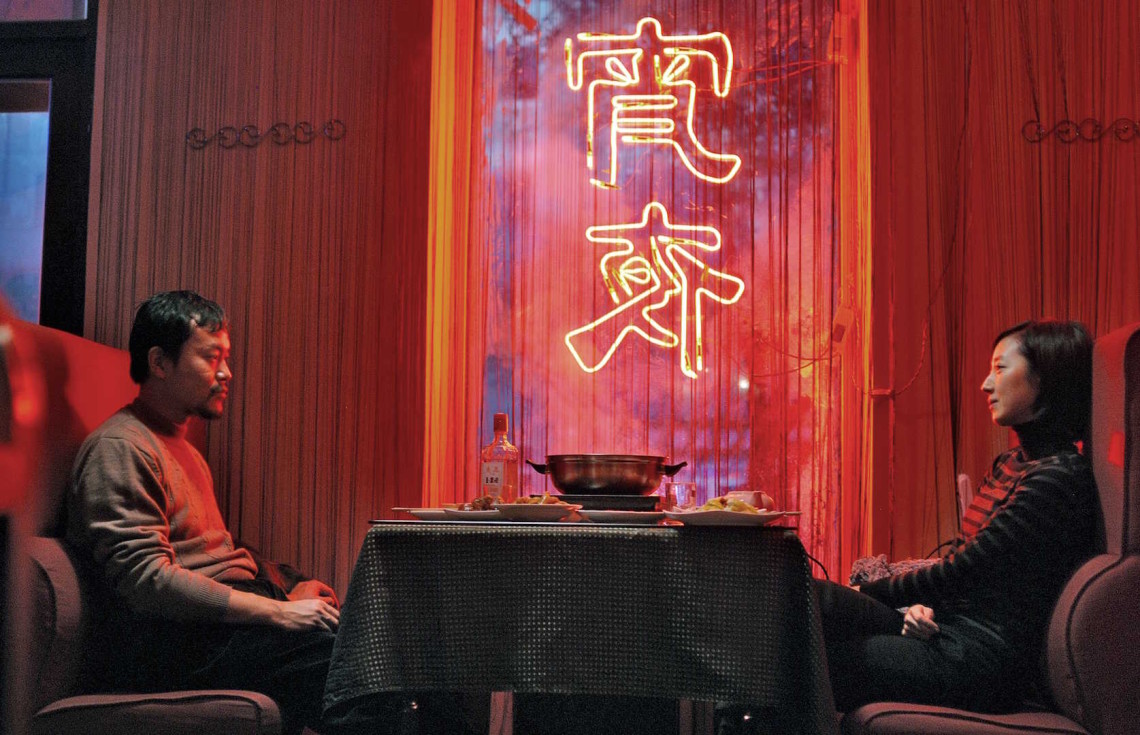 Black Coal, Thin Ice is noir stripped so bare that its stark procedural lapses into the abstract, where bleached daytime shots create a purgatory that lapses into the hell of the night, where monochrome contrasts of black skies and icy streets are given a sinister gloss by neon green and fuchsia. Befitting this spare but effective evocation of b&w and color noir, the central murder mystery revolves around piecemeal corpses, dismembered body parts scattered among various coal factories in a province. That workers only discover these pieces because they interrupt the machinery lends the film a political angle, albeit one that primarily establishes the overwhelming ambivalence and dispassion that hangs over the picture.

The film begins in 1999 upon the discovery of the first body. A match cut of a severed hand poking through a stack of coal and the entwined hands of two lovers solidifies the bleak tone, more so when that couple is then seen violently breaking up as the man, detective Zhang (Liao Fan), attempts to pin down his partner to stop her from taking a train away from him. Zhang gets assigned to the murder case and swiftly collars a few suspects in a salon, only for one cop to accidentally let a pistol drop out of a suspect’s jacket, which leads to a shootout in unbroken long shot, the aesthetic distance only magnifying the horror of the casual mistake and its dire consequences.

The effortless unorthodoxy of that shot setup defines Diao’s imaginative style, which never drifts too far outside a calmly ordered procedural even as it takes small visual detours that give the film a dreamy quality. Take the camera pan that follows a car in 1999’s warm weather to a motorcycle in the dead of winter in 2004, or sickly yellow light that infects a tranquil ice skating rink with tension. Despite Diao’s nominally focused direction, he instantly lets the plot slip entirely out of grasp to focus on the emotional currents of Zhang, now an alcoholic, becoming obsessed with the first victim’s widow, Wu Zhizhen (Gwei Lun-Mei), who has since revealed ties to several subsequent murders.

Zhang’s and Wu’s interactions have the tenor of the rawest noir; Zhang in particular resembles the roles Bogart used to play, the morose yet terrifying hangdog who is a romantic in both senses of the word. Zhang breaks apart the narrative flow by bypassing the normal evidence-gathering and instead directly ingratiating himself into Wu’s life, hanging around her dry cleaning shop and teasing, flirting, and just plain badgering her until she finally talks to him because she has no other choice. But even as Zhang extracts more information from the widow and finds more and more connections to the murders, the film only sinks deeper into its moral morass. After all, it’s hard to take any satisfaction from the detective shaking answers out of Wu when he stoops to a form of harassment she finds all too familiar.

Zhang’s methods may be brutish, but they are also longing, and the film’s truest expressions lie not in the final expository revelations but in the touches of gruff, muted poetry that run through the film. A glass bottle kicked over the vacated floor of the coal factory makes for an ominous forecast of unsolved mystery, and a casino that might hold the key to the truth doesn’t glow with neon so much as radiate, a giant pulsing mass that seems if it might swallow itself in its greed and boredom. Perhaps the greatest moment of the film involves Zhang’s ruse to smoke out a suspect from a skating rink: he has the attendant call out the name of one of the victims as if summoning them for a phone call. The camera hones in on the loudspeaker as it seems to produce an extra chill into the wintry air, and as people skate by oblivious, one figure jolts upright and stares at the brass horn as if hearing the voice of a knowing god. Here the shrewd gamesmanship of the script and the elegiac direction mesh perfectly, cementing Diao’s quintessential noir as one of the best of its kind since Kiss Me Deadly.

Well Go USA give Diao’s film a solid transfer. Detail remains consistently strong, while the film’s hyperreal color pops in the ubiquitous neon. The translucence of the lighting is retained, casting many frames in a haze, but nonetheless the image remains sharp enough to retain the eerie, lonely blackness of night without heavy crush. Skin tones and texture remain stable throughout. The audio is similarly strong, mostly front-mixed in the form of dialogue but presented clearly and without errors.

A trailer is included.

Diao Yinan’s film is one of the best films noir of its time, a throwback that updates the genre’s political context and continues its legacy of existential experimentation.