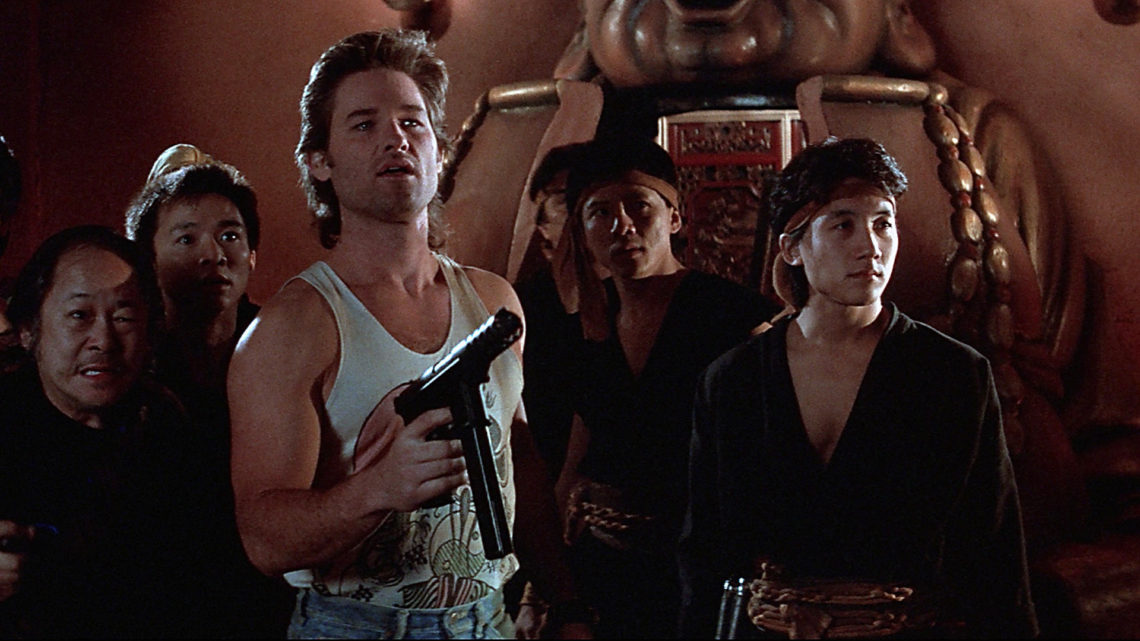 “Big Trouble in Little China” at 30: Still Shaking the Pillars of Heaven

John Carpenter called Big Trouble in Little China an “action adventure comedy kung-fu monster movie.”20th Century Fox Blu-ray, 2009. As the film marks its 30th anniversary July 2, the description remains a most accurate assessment. This 1986 masterpiece of generic potpourri is a whole lot of movie packed into its brisk 99-minute runtime. In the opening scene, which sets up the flashback to the film’s story proper, tour bus driver Egg Shen (Victor Wong) touts the exploits of Jack Burton (Kurt Russell), proclaiming his indebtedness and saying the unlikely hero showed great courage in the face of danger. There is talk of green flames, Chinese black magic, monsters, ghosts, and sorcery, all building up to a fantastical tale of mythic proportions. This introduction gives Big Trouble in Little China a good deal to live up to, and amazingly, it succeeds.

Like the suddenly and straightforwardly present Nada (Roddy Piper) in Carpenter’s They Live (1988), but unlike the notoriously brazen Snake Plissken (Russell) in Escape from New York (1981), Burton appears with no detectable, or at least no relevant, past. His character is defined by what he does in the film’s plot rather than what brought him to this point in the movie’s broader story. Preaching from the pulpit of his 18-wheeler, Burton’s dynamic character and genial if occasionally pugnacious disposition is immediately apparent. Barreling down the highway aboard his prized Pork Chop Express, he confidently asserts his refined skills (“I never drive faster than I can see”) and chalks up his abilities—on the road and, as we will see, in a fight—to being “all in the reflexes.” Burton’s tough-guy swagger finds an expressive outlet in his verbal bluster. With clichéd colloquialisms like “son of a bitch must pay” and the always popular “I was born ready,” Russell plays Burton as someone who has absorbed too many John Wayne movies.

Despite this outward gusto, however, a question emerges through the course of Big Trouble in Little China as to how much of this behavior is a contrived facade versus Burton’s true personality. It is obvious he is performing to a certain extent (and twice in the film, he literally pretends to be someone he isn’t), which makes him something of a heroic contradiction. With an enigmatic inconsistency, he at times expresses a willful avoidance of conflict and a reticence to enter into potentially risky situations. Still, he possesses an unflagging inclination to go looking for problems, including romantic ones. When he and Wang Chi (Dennis Dun) go to the airport to pick up Wang’s fiancée, who is promptly kidnapped by the Chinese street gang known as the Lords of Death, a young lawyer with the fitting name Gracie Law (Kim Cattrall) catches Burton’s eye. He is told she is trouble, which of course intrigues him more, and he swiftly makes a move. 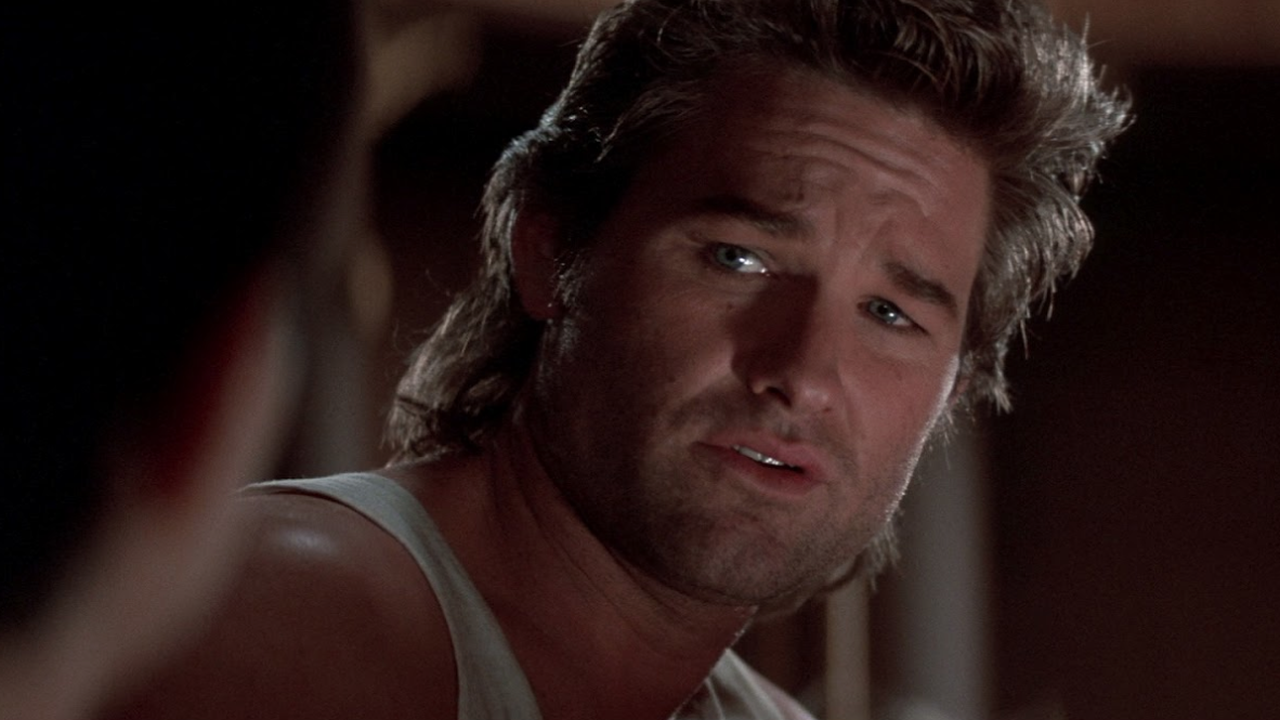 Burton’s brash machismo leads one to assume he knows a thing or two about violent entanglements, yet when a gunfight breaks out later in the film, he leaves the safety on as if he were green on the action scene. Nevertheless managing to shoot one of the baddies anyway, he appears shocked, at either his proficiency or the act itself. Asked if that was the first time he ever plugged someone, he unconvincingly responds, “Course not.” Burton is also an uncertain combination of bewilderment and eagerness. Upon first encountering the kung-fu street fighting, he looks on with wide-eyed awe and panic (little wonder: the back-alley brawl featured some 60 performers). Later, just before the big battle finale, he temporarily knocks himself out cold by shooting into the ceiling and dislodging debris, which falls squarely on his head. Not always successful—far from it—the fallible Burton gets beaten almost as regularly as he triumphs. It was actually at the behest of Fox chairman Barry Diller that the opening scene with Egg Shen was added after production wrapped, specifically in order to build up the frequently inept Burton. With this vocal and physical bravado running up against causal bumbling and combat ineptness, Russell considers the likable protagonist a blowhard who “thinks he’s Indiana Jones.”20th Century Fox Blu-ray, 2009. Certainly, these facets of his character make Burton a relatable, regular guy when compared to the muscle-bound supermen more prevalent in 1980s action spectaculars. Equally unusual for uber-masculine heroes of the era, he also has an unwavering flirtatiousness, regardless of inopportune timing or surrounding strangeness. As if to hammer this point home, after finally landing a kiss from Gracie, Burton enters into battle with the freshly planted lipstick smears hilariously and obliviously imprinted on his mouth.

Traversing the San Francisco streets in his bulky Freightliner—a suitably symbolic vehicle that is as big, loud and awkwardly out of place as he is—Burton can’t help but call attention to himself (a Chinese, apparently movie-themed tank top doesn’t help either). The Chinatown locale reeks of seedy chaos and lurking danger, appropriately crass territory for Burton, who is right at home in a setting of gambling and drink. Having had more than his fair share of experience with disreputable characters, he is savvy to the schemes of others and calls BS when he sees it. For all his renegade-outlaw boldness, he is also quick to recognize subtler degrees of interaction, with comments like “racial differences notwithstanding” when discussing the pleasantly antagonistic bond between he and Wang, with whom Burton is often distrustful but ultimately friendly. (Dun likens their incompatible, though dependable, alliance to that of Butch Cassidy and the Sundance Kid.20th Century Fox Blu-ray, 2009.)

Taking a cue from that iconic allusion, in Big Trouble in Little China there are references to Dirty Harry (no doubt another model for Burton) and, even more apt, Alice in Wonderland. In the midst of the kung-fu laden gang warfare, a trio of malicious magicians burst forth from plumes of smoke. The Three Storms, embodied by figures representing and using the powers of lightning, thunder, and rain, are then joined by the mysterious Lo Pan (James Hong), arriving with blinding beams of light emanating from his eyes and mouth. After running over Lo Pan, who first appears unharmed then disappears completely, Burton describes the fearsome leader thus: “Tall guy, weird clothes. First you see him, then you don’t.” Now firmly entangled in a baffling supernatural world of otherworldly spirits and powers beyond his admittedly limited comprehension, Burton is facing more than he bargained for. “I’m feeling a little like an outsider here,” he says, noting a condition that is never quite rectified, though it does little to sway his enthusiasm.

Initially written by Gary Goldman and David Z. Weinstein, then considerably revised by W.D. Richter (who directed the similarly genre-bending 1984 bonanza The Adventures of Buckaroo Banzai Across the 8th Dimension), there is ample explanatory dialogue in Big Trouble in Little China that attempts to ascribe logical, or at least historical, sense to what is happening. Though the effort is admirable, it ultimately doesn’t matter. The inscrutability of the increasingly bizarre occurrences and the rapid unspooling of events set up an unrestrained world of narrative possibility, and that uncertainty is what keeps the film so entertaining. Situating the picture in a milieu of rain, neon lights, and vibrant color (this is the 1980s, after all), Carpenter imbues Big Trouble in Little China with an extraordinarily rich visual texture, which only amplifies the ornamentation inherent in the Chinatown set to begin with (courtesy of production designer John J. Lloyd and art director Les Gobruegge).

At first, Burton understandably has his doubts about the fantastic situation he finds himself in, but as everything moves along with a playful disinterest in plausibility, he, like the audience, grows to accept the peculiarity. As in a video game, Big Trouble in Little China proceeds level upon level with an extraordinary forward momentum, the film forcing Burton and the others to prove their worth by being jointly tested in the developing action, just as the mismatched heroes were in Carpenter’s Assault on Precinct 13 (1976). Unlike in other Carpenter films such as that one, Halloween (1978), The Fog (1980), Escape from New York, The Thing (1982), and even Prince of Darkness (1987), Burton and his cohorts are not necessarily threatened by the spatial restraint of their restrictive setting, nor is the external danger moving in on their sedentary placement. In Big Trouble in Little China, the mobile heroes go willingly into the devil’s den.

Part of what also keeps the film so effortlessly free-flowing is its lack of pretension and an utter refusal to take itself too seriously; there are no religious, political, social, or economic messages to be gleaned here as there are in other Carpenter features. Partially as a result, this is also one of his most humorous films. Aside from Russell’s posturing and his delivery of self-consciously foolhardy lines (in third person, no less: “Ol’ Jack always says, what the hell.”), there is cartoonish slapdash action accentuated by high-flying acrobatics and quick one-liners. Always proficient in terms of composition, Carpenter likewise flaunts his capacity for comical staging (see also Chevy Chase manipulating bodies sight unseen in Memoirs of an Invisible Man [1992]). There’s purely visual humor, for instance, when Carpenter maintains a prolonged wider shot of a bemused Burton and company as a recently consumed mind-altering potion takes hold, and when Lo Pan’s magisterial gliding movement is at one point due to his standing on an escalator.

Less humorously, some of the film’s ethnic and perhaps even sexist platitudes may not sit easy from a politically correct vantage point, be it the overtly formulaic Asian tropes or the objectified “Haulin’ Ass” girl that adorns Burton’s truck. Though Howard Hawks has been the defining influence on Carpenter’s work, in Big Trouble in Little China especially, there is scarcely trace of an admirable Hawksian female role. At worst, Gracie is a hapless damsel in distress; at best, she is, as John Kenneth Muir notes, “almost a parody of that American Hollywood film cliché: the lady crusader.”Muir, John Kenneth, The Films of John Carpenter. North Carolina and London: McFarland and Company, Inc., 2005. But though Tony Williams calls Big Trouble in Little China “difficult,” arguing it “confounds the viewer by its eccentric handling of martial arts sequences and yellow journalistic perceptions of the Chinese community,” even that it “regards the non-Westernised ethnic entity as a demonic threat,”Conrich, Ian and David Woods, eds., The Cinema of John Carpenter: The Technique of Terror. London and New York: Wallflower Press, 2004. it is hard to make a case for any offense intended—especially because Dun’s Wang Chi is, after all, a more authentically heroic figure here than Russell’s Burton. 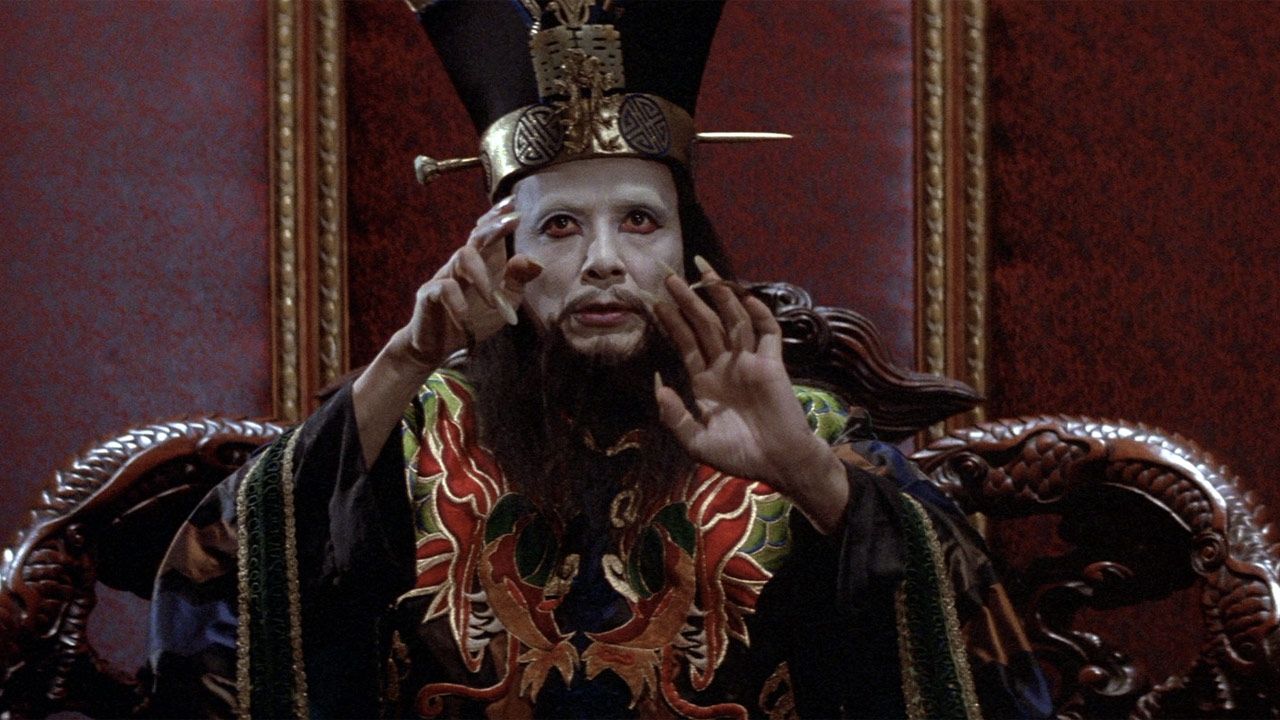 For all of its virtues, Big Trouble in Little China was also, well, trouble. Though both Carpenter and Russell fondly recall how much fun the film was to make, Carpenter still regarded the project as simply “an assignment”20th Century Fox Blu-ray, 2009. for 20th Century Fox. It was rushed into a 15-week production in order to beat the release of the somewhat similar Eddie Murphy film, The Golden Child, which it did by five months. But it didn’t matter. Hindered by a lackluster advertising campaign and a divisive quirkiness, Big Trouble in Little China was still a box-office disappointment, only grossing $11.1 million in North America, significantly below its roughly $25 million budget.

Nevertheless, though maligned upon release and still unjustly regarded by many as minor John Carpenter, Big Trouble in Little China is undeniably a one-of-a-kind film, at once figuring squarely into the director’s filmography and standing alone. Like a Saturday morning serial, it is all action pretty much all the time, an adventure teeming with humble comedy, team heroics, and Richard Edlund’s dazzling special effects. More than the “good fun time” Kurt Russell says, it is, upon reevaluation 30 years later, a supremely entertaining masterpiece.