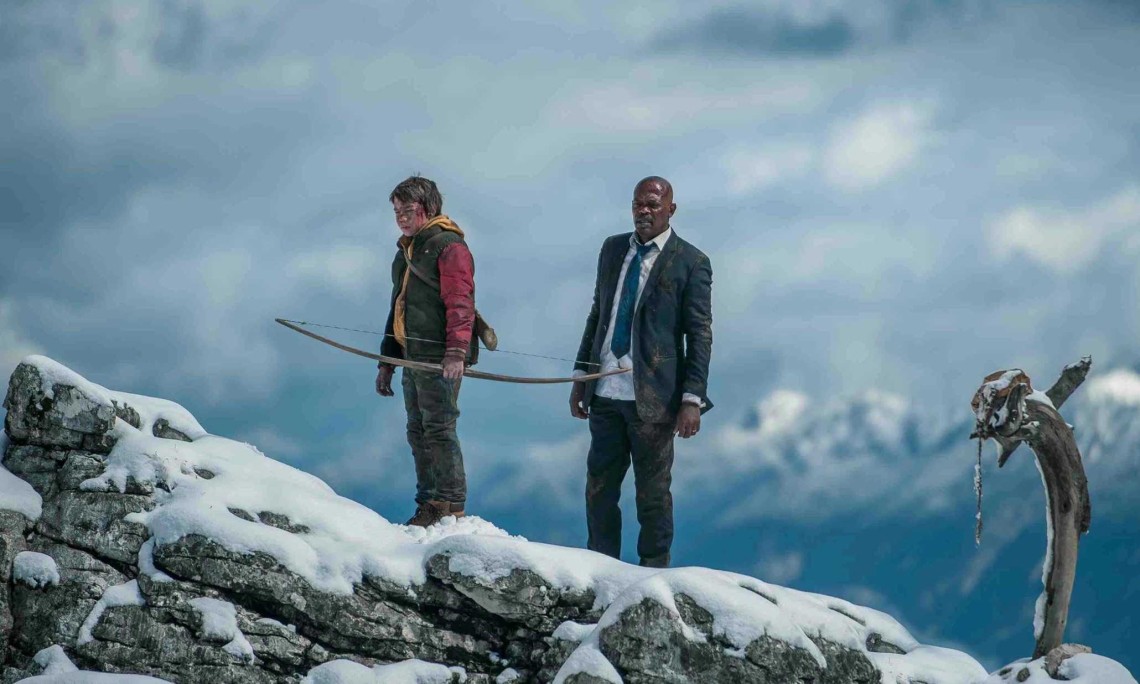 With nostalgia currently holding the box office in a raptor claw, it’s amusing to discover that this summer’s most purely enjoyable throwback to those 1980s Steven Spielberg-produced Amblin entertainments is not, in fact, the Steven Spielberg-produced Amblin entertainment Jurassic World. Instead, Big Game comes to us from Finland, via 38-year-old writer-director Jalmari Helander, who appears to have absorbed so many retro-Spielbergian boy’s adventure tropes into his filmmaking DNA (along with healthy doses of stuff like WarGames and Cloak and Dagger) that at times the movie feels like it was dug out of a time capsule from the VHS era. I mean this as a compliment.

An adorably poker-faced Onni Tomilla stars as Oskari, the runt of the litter in his tiny Finnish mountain village. He dreams of being a great hunter, like his father before him, but the poor kid barely has the strength to pull back the string on his bow and arrow. Nevertheless, it is the eve of Oskari’s 13th birthday so, according to custom, he must embark alone on an overnight safari and bring back a big game trophy to prove he’s become a man.

As this deliriously silly movie would have it, Air Force One has just been shot down en route to Helsinki thanks to a turncoat Secret Service agent (Ray Stevenson) and a mysteriously-motivated terrorist (Mehmet Kurtulus) in the smooth-talking Hans Gruber mold. This is how Samuel L. Jackson’s embattled, lame duck President William Alan Moore (any resemblance to a certain sitting head of state is presumably entirely intentional) finds himself helpless and hunted in the forest, missing a shoe and relying on his new best friend Oskari to get out of these woods alive.

Their relationship is delightful. Tomilla has a wonderfully severe manner and bearing, adopting an all-business pose that contrasts with his tiny stature to droll comic effect. Jackson, who too often these days defaults to shouty glowering, kicks back here with his most gregariously endearing performance in quite some time. (I’d vote for him.) President Moore is considered soft by the hawks on his White House staff, much like Oskari is by the other boys in his village, and it may be obvious but also no less satisfying to watch these two bond and prove their mettle with the defiant courage of the underestimated.

Naturally, back in Washington, everybody’s freaking out. The panicked V.P. (Victor Garber) and a harried Chief of Staff (Felicity Huffman) enlisting the help of a retired CIA pro (Jim Broadbent) to try and track down POTUS while explaining away some of the larger holes in Big Game‘s cheerfully preposterous plot. Broadbent is in especially fine form, plowing through tedious exposition while snacking on a ham sandwich that seems to interest him far more.

Helander wears his influences well, shooting Oskari’s discovery of Air Force One’s escape capsule with low angles and lens flares that all but scream ET. There’s a rambunctious spirit to his chase sequences that compensate with energy for the finesse the filmmaking sometimes lacks. Though reportedly the biggest budget film in Finnish history, Big Game looks a bit threadbare compared to the bygone blockbusters it’s attempting to emulate. (A lot of this CGI is awfully dodgy.)

But you know, sometimes money isn’t everything. So much of today’s big-ticket filmmaking is designed to pummel you into submission that Helander’s scrappy chutzpah feels kinda soothing. I had a really good time watching this movie, remembering the simple pleasures of a goofy, ripping yarn. BIG GAME is huge fun.