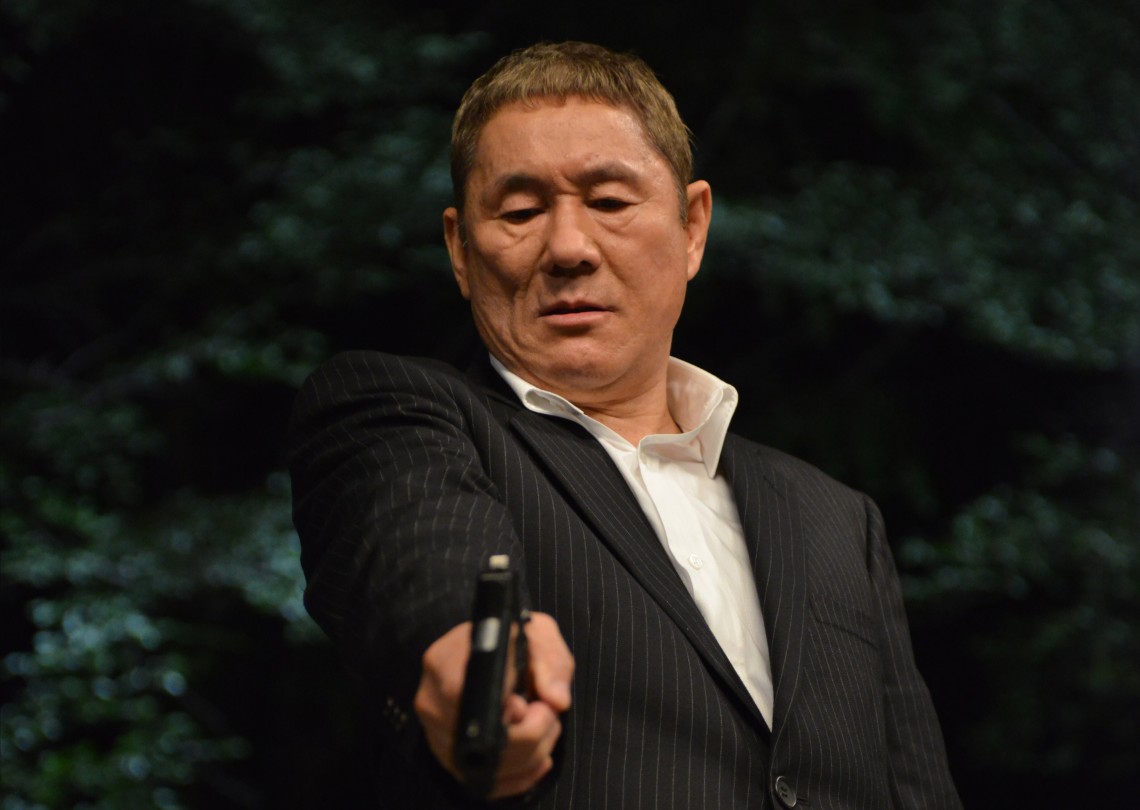 Takeshi Kitano’s ‘Beyond Outrage’ is Violent Yet Ordinary

There’s an unsubstantiated rumor repeated along the standard IMDb/Wikipedia movie information stream stating that Takeshi Kitano’s directorial debut, Violent Cop, was originally to be helmed by Kinji Fukasaku. I have no idea if that’s true, but in light of Kitano’s last two pictures, it would certainly be appropriate. Fukasaku (a late great master of genre filmmaking, best known for Battle Royale, as well as for the five-part Yakuza Papers series,) presented the back-door dealings of Japan’s organized criminals with a dispassionate, impersonal approach; focusing on politics and power structures as often as he did on fists and firefights. He turned the structured corruption of his countrymen, built on apparently dubious standards of honor, into genre thrills; rigidly constructed, minutely composed, and completely dispassionate.

Kitano’s previous crime/yakuza films, prone to narrative digressions and deliberately farcical subversions of genre standards, were much more philosophical affairs than Fukasaku’s pictures were. Efforts like Sonatine or Boiling Point can hardly even be called ‘crime movies’ or ‘yakuza movies,’ really. Kitano never cared about the politics of crime. The Outrage films, though, are a whole other story. These two movies do invest in the politics of crime. They do really care – or at least, ask us to care – about amputated pinky fingers and back tattoos and the boardroom dealings of organized criminals. These pictures are his straight-faced Fukasaku homage’s.

Beyond Outrage fits that descriptor even more than the original, in fact. The first Outrage was alternatively lauded and derided as a crime film by way of the slasher genre: nary 10 minutes would pass without a character dying an excruciating death. The first 40 minutes of Beyond Outrage, though, is a largely bloodless affair; doubling as both an epilogue to the past film and a prologue to the current one. This doesn’t make it a more thoughtful film than the original – but it’s a quieter, more talkative one; one more akin to the pictures Fukasaku made. There’s excruciating deaths aplenty in Beyond, don’t get me wrong, but it takes a while to build to them.

Years have passed since the events of the original film, which concluded – spoilers! – with the villainous Kato taking full control of the Kanto area’s crime syndicates, and with Otomo (Kitano) being executed in prison by longtime rival Kimura. Now, former Otomo associate and noted-young-punk Ishihara has teamed up with Kato; raking in dollars for the crime syndicate with modern stock-trading schemes. This, of course, pisses off a number of the elder gangsters, whose turfs are being claimed as a result of diminishing profits. (The stoically-delivered running joke of the film is that all the old-world gangsters are quite perturbed that they’re now expected to understand futures contracts, despite the increased profits offered, because beating people up and running protection/prostitution rackets was much simpler.)

Then there’s police rep Kataoka, who works tirelessly throughout the two-hour running time to get these rivals to kill each other, rather than building cases to arrest them legitimately. He provides the conduit needed for the movie to reach its violent passages: Beyond Outrage doubles back on the ending of the original Outrage, noting that Otomo actually didn’t die, and has been hiding out in an unknown prison system for the past year, thus allowing Kataoka to release him on parole. This frees up Otomo to ruffle feathers in the underworld and settle all his old scores, and ruffle-those-feathers and settle-those-scores he does. The first hour of the film builds to his reappearance, and the second follows him – quite dryly – as he attains the political standing needed to reign death upon his enemies.

For action junkies and genre fans, this all may sound quite exciting. But the film’s treatment of the narrative – defined by brooding music cues and action scenes purposefully devoid of dynamic framing – drains the emotion from the proceedings. Kitano’s ever-droll authorial voice comes through here in the sense of resignation that pervades the film. There’s a Wild Bunch-esque vibe nestled in the script of Beyond Outrage, a sense that these men’s bullets-and-bloodshed manner of doing things is on the way out. (Hence the gags about futures contracts and hedge funds.)

Unlike The Wild Bunch, though, these guys don’t seem to care enough to fight back against their own irrelevance. Otomo and his peers don’t seem tortured by the complicated morals of their criminal lifestyles, or worried about the impending end of their power structure, so much as they just seem complacent in the status quo. It feels like nothing less than an externalization of how Kitano looks at the material. When his Otomo gets shot in the gut, about halfway through the movie, even he can’t work up anything more than annoyance about it. He’s another resigned pawn. His only response is to lament that his attacker didn’t shoot him higher.

Another oft-repeated rumor about Kitano on the IMDb/Wiki trail comes to mind, completely unsubstantiated yet again. The story goes that, for Outrage and Beyond Outrage, he’d come up with ways for characters to die as his first priority, and then builds the script around those deaths as logically as he could manage. Again, I’ve no idea if that’s true – but it would sure make sense. Kitano pictures are thoughtful, deceptively spry creatures; defying convention and expectation at every turn. But not Outrage or Beyond.

Sure, the standard themes you’d expect are in play: There’s stuff here about domestic corruption in the text, and about organizations (legitimate, criminal, or otherwise) being nothing more than farces that serve the needs of the individual in power, rather than the whole. Yet it’s nothing the filmmaker hasn’t dealt with in far more ambitious terms before. The Outrage series is deserving of a term you’d never expect to see attached to a Kitano movie: ordinary.