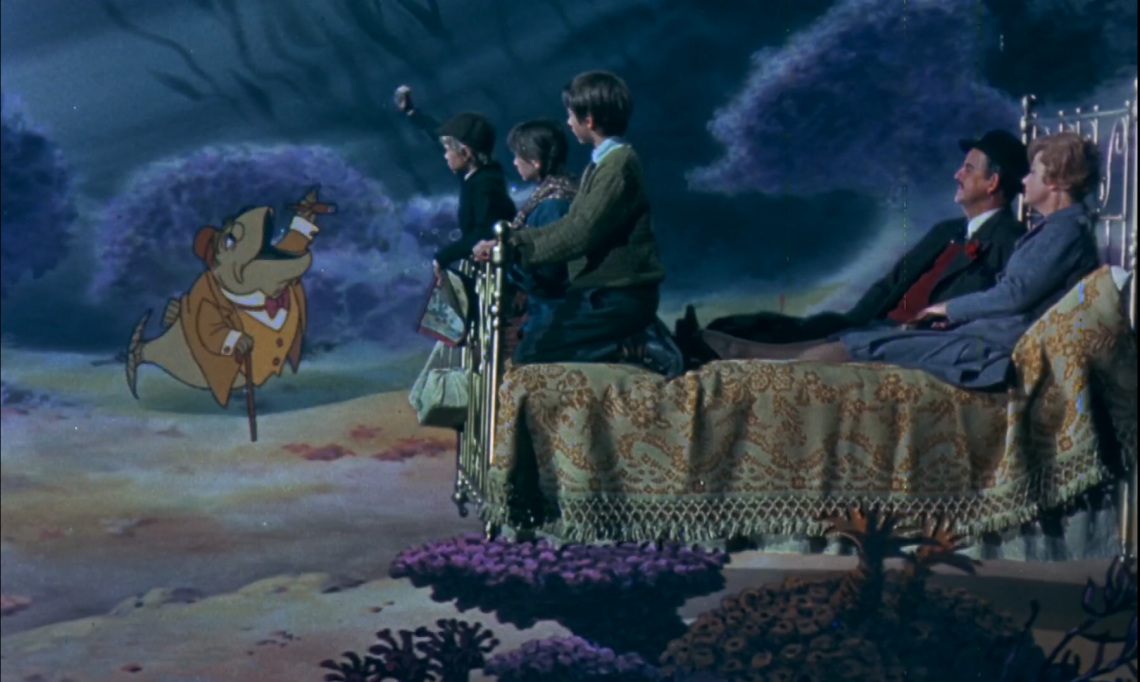 It’s not hard to think of Mary Poppins when watching Bedknobs and Broomsticks. Both were directed by Robert Stevenson, both were based on British children’s novels, both involve magic of a sort, both feature David Tomlinson as the male lead, and both have a bevy of songs from Richard and Robert Sherman. And, in many respects, Angela Lansbury is as much of a grande dame of Disney films as Julie Andrews is. Bedknobs and Broomsticks doesn’t quite measure up to Mary Poppins, though, because what could? The songs in this 1971 film are memorable, but not even “The Age of Not Believing” or “Portobello Road” can equal “A Spoonful of Sugar” or “Chim-Chim-Cheree.” Lansbury is delightful, as usual, but the child actors she has to act next to throughout this World War II-set story are all a bit limp; only when she’s opposite Tomlinson in the second half does her performance truly come alive.

But there’s a lot to like about this film, in which a trio of displaced children in Britain end up living with a witch-in-training who’s on the hunt for the final lesson of her training so she can finally be a real witch. Eglantine Price (Lansbury), though, doesn’t realize she was essentially duped until she finds the man (Tomlinson) who was the witchcraft school’s headmaster, AKA an unrepentant con artist who’s shocked to learn that anyone taking his course actually got magical results. Their search sends them to the world of animation and beyond so they can discover the spell for levitating and animating inanimate objects. The plot, however, is mostly just there to dazzle audiences with special effects, live actors interacting with animated characters, and the like. Nearly 45 years later, Bedknobs and Broomsticks is less dazzling than it may have been originally, but it’s still got a pleasantly bittersweet quality throughout.

Specifically, though the general conflicts are somewhat muddled, the specter of World War II hovers over this film like an unshakable cloud. Tomlinson’s roguish charmer is set up as Lansbury’s romantic interest, and though they do end up together at the end of the film (represented by a predictably chaste kiss), he’s off to fight in the war along with his fellow elder British statesmen. We’re meant to be proud of his character for finally appreciating what the right thing is and not running away like a coward; still, his sacrifice comes at the cost of a group of kids who’ve lost so much already and have to make peace with the fact that this may be their life now: a series of events marked by loss. Not all of Bedknobs and Broomsticks is able to be so consistently wistful–the animated sequence is somewhat slackly paced–but the noble heroism in its final moments is what sets this apart from Mary Poppins, if briefly.

Bedknobs and Broomsticks has not gotten the best transfer to HD, at least compared to movies like Mary Poppins and Who Framed Roger Rabbit, which both feature a hybrid of live-action and animated characters. Granted, like Mary Poppins, Bedknobs and Broomsticks is primarily a live-action film with one sequence including animation. On one hand, the image quality has not been smoothed out so much that this movie looks unlike it did originally. On the other, there’s still a surprising amount of grain even for an HD transfer. No doubt this is an improvement over the DVD, but it’s not, one imagines, as sparkling a transfer as possible.

Riddle me this: if a DVD release of a movie included an extended cut, why would the Blu-ray of that same movie not feature that extended cut? Also, if the Blu-ray isn’t going to include an extended cut, why include a special feature that was specifically designed to coexist with a longer version? That, unfortunately, is the case with the Bedknobs and Broomsticks Blu-ray; the “Music Magic” special feature from a previous DVD release has been ported over to the Blu-ray, in spite of the fact that it was created to comment on a 139-minute version of the film. The Blu-ray has only the 117-minute theatrical cut. Certainly, the issue can’t be size, can it? (As a point of comparison, Muppets Most Wanted is out on Blu-ray today and has both the theatrical and an extended cut on the same disc.)

Whatever the explanation may be, if you have an old DVD of Bedknobs and Broomsticks, don’t throw it away if you want to hold onto the extended edition. In general, the rest of the extras aren’t too remarkable if you’ve got a DVD copy of the film. There’s old features like an all-too-brief and comically uninformative supplement about how greenscreen effects like the bed sailing through time and space were accomplished back in 1971 versus how similar effects were achieved on…Wizards of Waverly Place. (Drink in the corporate synergy. DRINK IT IN.) There are also deleted and extended songs and scenes, but the deleted scenes–just barely over 10 minutes in length–would be much better if they were integrated into say, an extended cut of the picture.

Fans of Bedknobs and Broomsticks may be disappointed to learn that, although this 1971 family film has finally been upgraded to HD, the extended edition on past DVD releases is nowhere to be found.