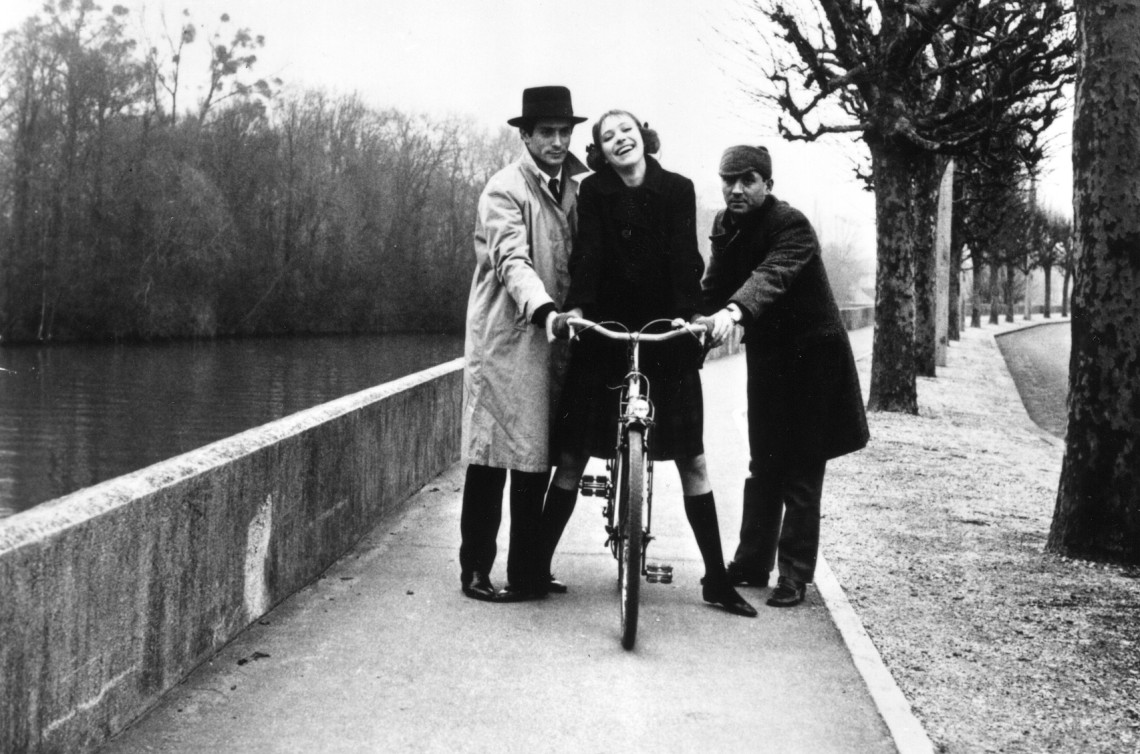 On Godard’s “Band of Outsiders”

Kenji Fujishima writes about Godard's 1964 film "Band of Outsiders" on the eve of its NY re-release.

It’s easy to be charmed by the playful surface of Jean-Luc Godard’s 1964 film Band of Outsiders, which returns to theaters tomorrow in a new digital restoration courtesy of Rialto Pictures. The film has the outlines of a crime plot—a scenario borrowed from Dolores Hitchens’ novel Fool’s Gold of two men and a woman planning to rob money from her aunt—but Godard often forsakes it for random digressions, scenes that show the characters following their own impulses rather than the dictates of a structured narrative. Franz (Sami Frey), Arthur (Claude Brasseur), and Odile (Anna Karina) are dreamers, distracting themselves from the ennui of their lives by playacting B-movie tropes and keeping their hope alive for a better future. And Godard, as is his stylistic wont, adds to the youthful mood with a cinematic style as impulsive as its characters—one as open to a minute of complete silence on the soundtrack as it is to musical montages featuring actors directly addressing the camera.

But there’s much more to the film than that impetuously romantic surface that fans like Quentin Tarantino and Hal Hartley immediately remember. That is not to say it doesn’t deserve its reputation as one of Godard’s warmest and most widely appealing movies. His earlier films, including My Life to Live (1962) and A Married Woman (1964), and many of his subsequent work, especially past the 1960s, foreground politics, philosophy, and sociology in intellectually dense ways that could sometimes be near-impossible to decipher. Band of Outsiders hews closer to the template of his groundbreaking 1960 debut Breathless in marrying a comprehensible plot with riffs on popular genres and fairly fleshed-out characters, all marinated in his distinctly cool modernist style.

Politics, philosophy, and sociology are still evident in Band of Outsiders, albeit more subtly than in, say, the baldly essayistic format he adopted for later films like 2 or 3 Things I Know About Her (1967), Tout va bien (1972), and much of his work from the 1980s onward. A scene with Franz and Arthur reading news stories about crime in France and atrocities in Rwanda while waiting for Odile adds a momentary jolt of real-world awareness to the playful proceedings. Godard’s own voiceover narration often evinces an obliquely philosophical bent—perhaps most memorably his line about Franz wondering “if the world is becoming a dream or the dream is becoming the world” while dancing the Madison–for no reason at all, because they just felt like it–at a café with Arthur and Odile. And as for sociology, one can sense this angle in the sorely unromantic milieu in which the film takes place: working-class France, a drudgery-filled environment in which people like the three main characters are forced to escape into the world of pop entertainment out of sheer desperation. A sequence that begins with Odile singing a song set to words by Louis Aragon while she and Arthur ride a train soon transforms into a montage of forlorn train passengers and homeless people sleeping out on the Paris streets. (Raoul Coutard’s cinematography adds to this mood, bathing the film in overcast black-and-white tones, as does Michel Legrand’s mournfully lilting music.)

It’s that sense of melancholy Godard evokes throughout even the most immediately charming of passages in Band of Outsiders that helps give the film its substance. There’s nothing glamorous about these characters’ lives: Arthur, for one thing, lives with an uncle who frequently harasses him, especially when he gets wind of the money Arthur’s planning to steal; Odile doesn’t really know what she wants out of her life and still lives with a rich aunt who allows her to borrow money whenever she goes out. Though we get less of a sense of Franz’s personal life, he exudes a loneliness and sense of introspection that stands in stark contrast to Arthur and Odile. Whatever “glamor” exists in these hardscrabble lives comes almost solely from Godard himself through his narration, one that brings a poetic perspective to even the gloomiest settings and circumstances. What is merely a train station to which Arthur and Odile escape on their way home becomes “the center of the earth” under Godard’s more lyrical view.

That narration is somewhat akin to the way James Joyce aimed to ennoble human experience in his novel Ulysses, heightening it through a diversity of prose styles while essentially chronicling a regular day in the life of a group of otherwise humdrum characters. Godard adds another layer to Joyce’s artistic vision, however, with his encyclopedic cinephilia, with cheeky references ranging from Fritz Lang’s obscure 1950 noir House By the River to Jacques Demy’s The Umbrellas of Cherbourg (a musical number from the latter is heard over a café loudspeaker). With this trio behaving, in their own ways, like characters in “a bad B movie,” Band of Outsiders adds up to a lament for the knowledge that life can rarely match up to the art that we all know and love. In the case of this film, though, Godard for once allows for a certain level of optimism to break through, mostly by virtue of a finale that leaves two of its central dreamers swimming out at sea toward an uncertain future, but at least finally managing to get out of their current despairing existence.