“And So It Goes” Nowhere Of Interest

Once upon a time, Rob Reiner made good movies. Scratch that: he made great movies. Thirty years ago, he made This Is Spinal Tap in his very first outing as a director. Two years after that, he made Stand By Me. A year after that, he made The Princess Bride. And two years after that, he decided, on a whim, to straight-up reinvent the romantic comedy genre with When Harry Met Sally, which to this day represents the gold standard of what films in its category are capable of. The Rob Reiner of the 1980s had verve, wit, and gusto. He had something to say.

But the Rob Reiner of today has none of these things, at least until you put him in front of Martin Scorsese’s camera and nudge him into losing his temper. The intervening years between his heyday and 2014 have been rough; Reiner’s sardonic, knowing humor has worn down and given way to a proclivity for lightweight schmaltz that feels decrepit even when centered around the young. His new film, And So It Goes, at least sidesteps that latter problem by focusing on the old, but the film remains frustratingly confined by its otherwise airy, insubstantial storytelling qualities. It’s a lazy, easy, thunderously dull movie from a veteran talent who’s capable of more.

And So It Goes riffs on a tried and true formula in which a crabby, socially malcontent protagonist is slowly thawed out and made human again in the span of 90 minutes. Our central subject here is Oren Little (a fabulously grouchy Michael Douglas), an insensitive, intolerable, inflammatory realtor who goes out of his way to make people dislike him. If he cuts a familiar figure, he’s no less entertaining for it; Douglas, at least, is having fun going full-tilt as the jerk. Oren outfits the houses he sells with pictures of families whose ethnic backgrounds match those of his clients. He muscles pregnant women out of parking spots. He snipes dogs in the ass with paintball guns. He’s a remarkable bastard.

Society can’t have that, of course, and neither can Reiner. So he puts Oren to the test by plopping family into his lap. Oren’s recovering addict son, Luke (Scott Shepherd), is on his way to jail, and in dire need of a babysitter for his precocious young daughter, Sarah (Sterling Jerins). The two men are so distanced that Oren isn’t even aware of Sarah’s existence until Luke forces the issue, leaving the curmudgeon in charge of the girl’s well-being. Naturally, Oren turns to his far more amiable neighbor, Leah (Diane Keaton), for guidance, but his attempts to pawn Sarah off naturally bear no fruit. 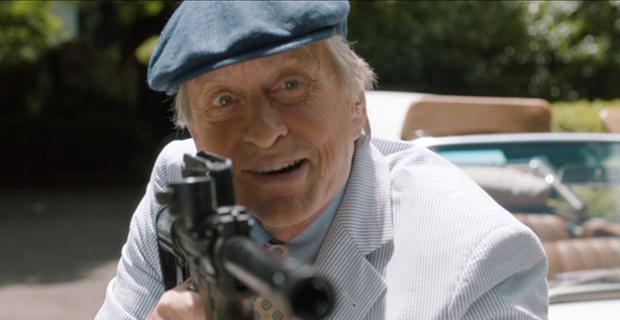 Good thing for Oren; it turns out that all a person divorced from humanity needs to recover from his isolation is a child’s laughter, and also the love of a good woman. Variations on these ideas echo throughout the history of the medium, but even if you’ve only been paying attention to recent cinema, then you may catch traces of Little Miss Sunshine, The Royal Tenenbaums, Gran Torino, and Up in Reiner’s premise. And So It Goes is neither half as good as the best of these, nor half as bad as the worst, but that’s not to say it’s especially compelling outside of the rascally pleasures of Douglas’ performance.

Beyond that element, though, the film is a bore. (There is a measure of delight in seeing Reiner appear in a supporting role, wearing a toupee and boasting a dye job in his beard.) The mere act of composing a review induces drowsiness. This is not an engaging movie, or a thoughtful one; it’s not even heartwarming, per se, unless you find redemption songs for wealthy scumbags with blatant, unapologetic, and universal prejudices stirring. The real problem, however, isn’t that Oren’s story is unpalatable by its very nature. It’s that And So It Goes fails to develop any of the connective tissue necessary to achieve the catharsis Reiner shoots for. There’s almost no transition between the Oren we meet at the start of the film, and the one we part ways with at the end. The film simply assumes his change of persona, a serious faux pas when one considers that Reiner films used to be revered for their characterizations. No longer, it seems.

One thought on ““And So It Goes” Nowhere Of Interest”