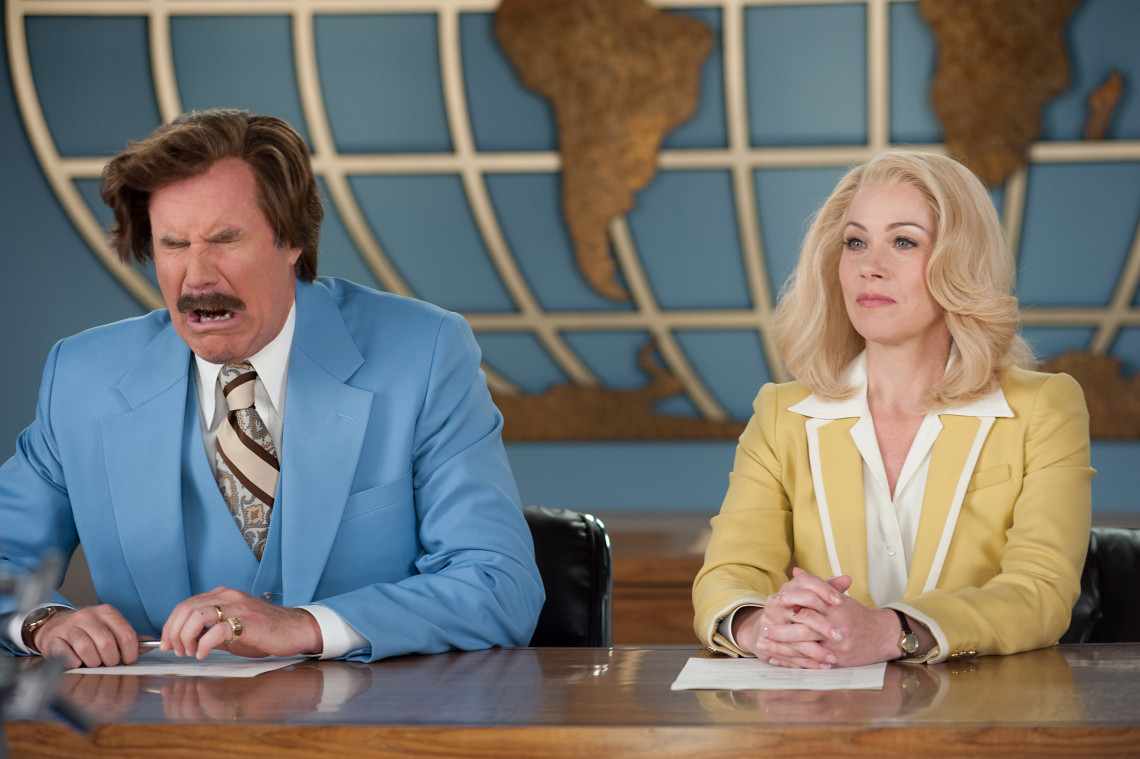 Anchorman was the quote-ready gift that kept on giving back in the summer of 2004. T-shirts declaring a love for lamps, posters about “Scotchy Scotch Scotch,” and appeals to “stay classy” all seeped into the mainstream thanks to Will Ferrell’s now-iconic ‘70s-era San Diegan anchorman, Ron Burgundy and his equally odd assorted news team of Brian Fantana (Paul Rudd), Brick Tamland (Steve Carell), and Champ Kind (David Koechner).

But such a golden goose of comedic catchphrases and non-sequiturs should not be left without a companion piece. The first film concluded with some quick gags about the characters’ fates, but there was an appetite among fans for more. By the beard of Zeus, what wonderful weirdness could Will Ferrell and director Adam McKay cook up after nearly a decade since we last saw the legend?

Alas, the answer is not as exciting as the first. There’s an expectation to live up to the original, tossing aside new content in favor of recalling those catchphrases and iconic moments. Ron and Veronica are married with a young son and have moved into the tough world of New York news. Too tough, it turns out, as a grouchy Harrison Ford (in his best supporting role of the year) boots Burgundy from the station for his unprofessional behavior. He falls into a familar career malaise before a guy in permanent sunglasses offers him a job at the first 24-hour cable news network, GNN. The news boys are reunited and the adventure begins anew.

Anchorman 2: The Legend Continues manages to squeeze some fresh content into its pre-packaged goods, like Champ Kind’s questionable enterprise and Fantana’s kitty photography career. But the best sequences were unfortunately some of the briefest. As Bill Kurtis’s narrator explains to younger members of the audience, the 24-hour news cycle was an unorthodox approach to reporting in those days. The fictional GNN acts as a satirical sword for Ferrell and McKay, skewering CNN and Fox News as the cause of death for broadcast journalism in order to play ratings games with patriotism, puppies, sex, and car chases.  The duo even raises questions regarding Rupert Murdoch stand-in Kench Allenby (Josh Lawson) and his corporate conflict of interest.

But the movie too often retreads the well-worn road of Fontana’s well-stocked supply closet, Brick’s intolerance to loud noises, and Burgundy’s female coworker shenanigans. Perhaps the biggest misfire was a Guess Who’s Coming to Dinner spoof in which Linda Jackson (Meagan Good) brings Burgundy home to meet her middle-class family. What follows is an excruciatingly long scene of Burgundy talking jive and no one showing him the door. Jackson fails to make much sense as a character compared to the fiercely loyal guys or one-note cameo characters. At first, she detests Burgundy, but then seems to warm up to him for his ratings appeal, even pursuing a romantic relationship. She’s willing to let Burgundy make an unfortunate rape joke, but then mysteriously disappears once he’s injured again, with not much reason given. She’s like a special guest in an SNL episode, with parts carved out for her, but nothing consistent. Both Burgundy’s and Kind’s racism is played up in the sequel, and it’s not exactly a welcome replacement for their sexism.

The best surprise of the original Anchorman was Applegate’s fiercely determined Veronica Corningstone as a nemesis for the insecure macho posturing of Ron Burgundy. Sadly, she too is largely absent here, so her success threatens little and she’s practically forgotten about halfway through the movie. Her presence is sorely missed, as Jackson is never given the one-line retorts and steely calmness to withstand Burgundy’s arrogant prejudice.

The problem is not that Anchorman 2 isn’t funny, it’s that we’ve seen most of this movie before. Other than a change in the order of jokes and some different cameos, many of the laughs are beat-for-beat cover songs for fans. For devout Burgundy acolytes, that might be enough, but for folks who fell in love with the original’s quirk and Sex Panther-dosed charm, it won’t bring about a new slew of apparel and posters. Of course you’ll laugh when Baxter saves the day, or during the finale’s zany action, but it all pales to light up the screen as much as  Anchorman‘s anarchic spark.