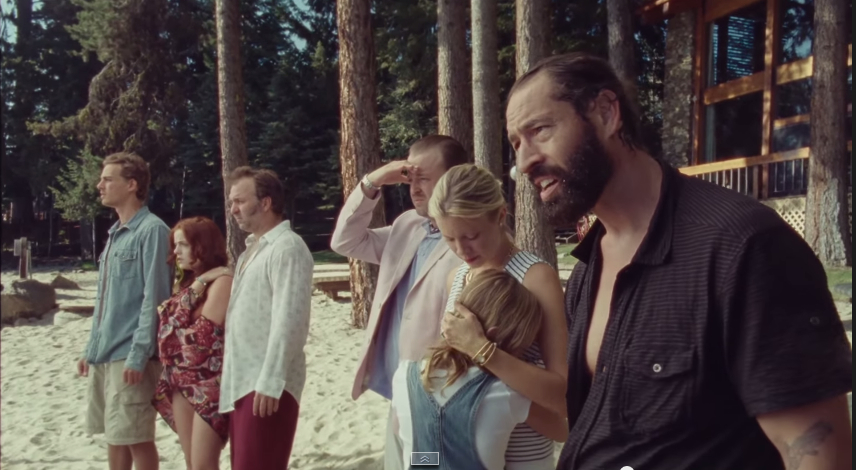 “Among Ravens” Is For The Birds

Early on in Among Ravens, directors Russell Friedenberg and Randy Redroad stage a dinner gathering between the film’s leads, a circle of friends meeting up to celebrate Independence Day near San Francisco. Before too much time passes into their revelry, they’re joined by Chad (Will McCormack), an awkward newcomer to their group and a fan of moody author Saul (Friedenberg), a writer with an avian streak running throughout his oeuvre. Chad, a professed bird-lover, wonders aloud why Saul’s books are named for birds but never actually use them as subject matter; the latter testily answers as only a self-serious artist could. “It’s a metaphor.” Open and shut.

Friedenberg, who also wrote the film, inadvertently (or perhaps intentionally) reveals Among Ravens‘ intentions here; the film practically runs on metaphor, leaning on allusion, symbolic representation, and figures of speech more so than character, or even narrative. If metaphor is fuel, then Among Ravens is the 2013 Bugatti Veyron of cinema, a movie that spews a constant, choking stream of metaphoric fumes as it trundles along from scene to scene until its inevitable conclusion. Under no circumstance do Friedenberg and Redroad want their viewers to lose sight of the hidden meanings that link the behavior of all things winged to the melodramatic antics of their films’ cast.

In the interest of being gentle, there’s nothing wrong or otherwise foul with heavy-handed metaphor; there’s no rule that dictates the necessity of subtlety. Sometimes, strong, pronounced metaphor can be used to great effect (see Cloud Atlas). In the case of Among Ravens, the repeated lectures delivered by precocious Joey (Johnny Sequoyah) in between key scenes feel like a tiresome overture. At times, her little monologues come dangerously close to insulting audience intelligence. Friedenberg’s is a naked metaphor, one that lays its terms out quite bare for his patrons, so as to relieve them of the task of processing it themselves. The film doesn’t allow much room for thought – you know what to think, explicitly because the script dodges around analysis with obviousness.

The film takes place, for the most part, in a single location: a secluded cabin on a lake shore, owned by unhappily wed Wendy (Amy Smart) and Ellis (Joshua Leonard). They’re hosting their chums, or, in the case of Saul, their exes; turns out that Saul and Wendy were once bound together in as miserable a matrimony as she and Ellis, though at least her first marriage produced Joey. Saul has brought along his current spouse, Emma (Victoria Smurfit), though like everyone else involved in Among Ravens‘ familial drama, she’s thoroughly dissatisfied with the relationship. She’s also sleeping with Will (Christian Campbell), the guy who ghostwrites all of Saul’s work. That little nugget isn’t even accorded a moment to properly shock us – it’s one of the first things we learn in the film’s opening scrawl. And to round the group out, there’s hippie life coach Hal (Calum Grant) and his girlfriend, Saturn Moon (Castille Landon).

So, this motley band of malcontents eat, drink, and whinge their way through the weekend, plotted on a course toward overwrought yuppie histrionics (with occasional bizarre tonal shifts that veer the film into near-slapstick territory). You might even feel bad for them if not for the fact that they’re all such miserable assholes, each in turn responsible for their ennui. Theoretically, Among Ravens‘ true protagonist is Joey, our eyes and ears on the ground in the midst of the film’s spree of narcissistic pissing and moaning, but she’s nearly a non-character. Chad, meanwhile, is meant to be the catalyst who sets off sparks and induces combustion in the people around him, but he’s equally as void of personality. She’s no more than a pouty Greek chorus, he a twitchy, misunderstood weirdo; neither performer is given anything to do but react to the mawkishness around them. They have no agency.

In that regard, Among Ravens misses the heights it shoots for – you might get notes from films like Teorema and even Visitor Q here, but only just – by a country mile. The film looks handsome enough, pitting the pristine clarity of its natural setting against the self-induced torment of its characters, but everything here is so half-cooked that Among Ravens ends up feeling like a first draft, a college-level attempt to pick away at the unease and regrets of adult life.