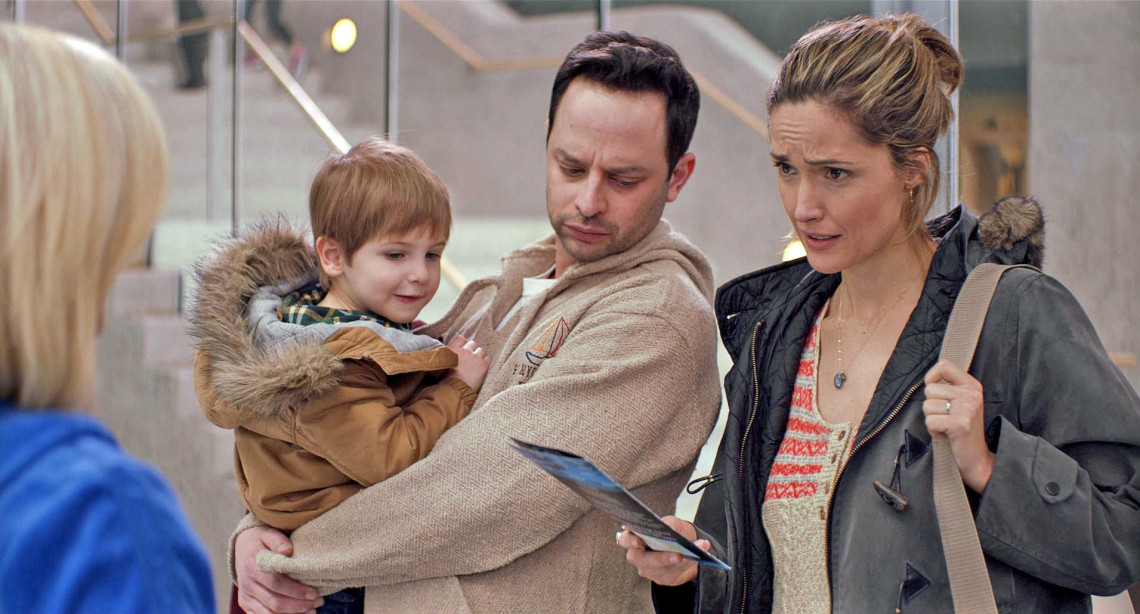 Coming-of-age tales featuring adult characters who resist growing up are a popular subject for many indie-film darlings. While there is no harm in recycling a current and increasingly common life crisis as a plot device, one at least expects such characters to have their own, unique stamp on the predicament. Watching a character like Megan (Keira Knightley) in Lynn Shelton’s crafty Laggies, for instance, can be a delight; she finds temporary solace and escape from adult responsibilities before realizing with some messy grace that she no longer quite fits into young-adult shoes. Other similar characters, however–like Jake (Nick Kroll) in the monotonous Adult Beginners, who flees to his sibling’s suburban “oasis” to avoid financial doom and a life crisis–make the viewing experience a redundant chore. The sophomore directorial effort from Ross Katz (known more widely as the producer of high-profile indies such as In The Bedroom, Marie Antoinette, and Lost in Translation) modestly aims for sincere charm, but the result consistently attracts indifference rather than empathy.

An enthusiastic yet apparently unsavvy entrepreneur, Jake loses all his money and shelves his future hopes when his start-up company, which sells some sort of Google Glass-like product, takes a big financial hit on the eve of its launch. Unable to afford his previous over-the-top lifestyle and left without an immediate, feasible monetary plan, he moves in with his pregnant sister Justine (Rose Byrne), her husband Danny (the terrific Bobby Cannavale, frustratingly wasted in a role that asks nothing of him), and their three-year-old son Teddy (played by twins Caleb and Matthew Paddock), contributing to their suburban household as a caretaker for his young nephew. The innovative businessman-turned-nanny–or manny, as male nannies are apparently referred to as nowadays–displays plenty of immature behavior while helping to first crack and then fix his sister’s seemingly problematic marriage.

Adult Beginners draws inevitable comparisons to The Skeleton Twins, Craig Johnson’s poignant and funny film, which also operates within the premise of dysfunctional siblings and adults in disarray. This film finds itself in an unfortunate spot in its involuntary thematic and release-date proximity to Johnson’s work. The comparison between the two films becomes a major disadvantage for Adult Beginners when one begins to dissect its aesthetic flaws, such as Jeff Cox and Liz Flahive’s dry, tired script (based on a story by Nick Kroll). It becomes evident rather quickly that Adult Beginners is a lesser version of the recovering brother-sister relationship between Kristin Wiig and Bill Hader, a duo with effortless chemistry and comedic control. To make matters worse, the subtlety of the skillful Byrne (one of the other Bridesmaids, coincidentally) and the overstated, gesture-heavy humor of Kroll carry no believable emotional electric, hampering Adult Beginners from delivering upon its modest ambitions.