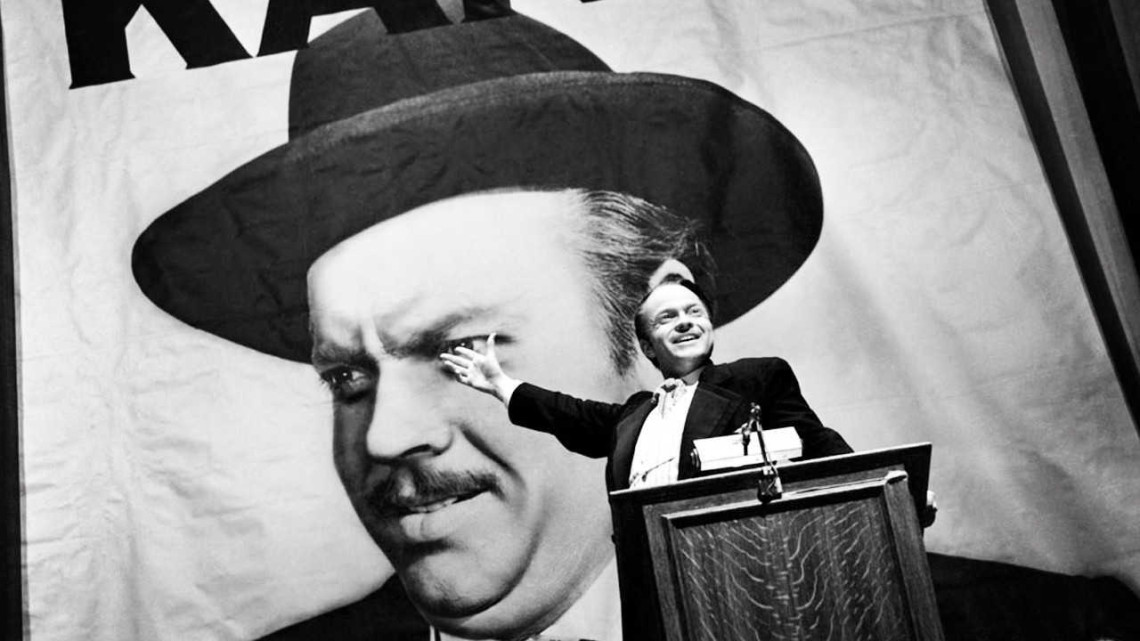 Even those casually interested in movies have bumped into Citizen Kane, probably on The Simpsons, or basically anywhere else in pop culture. Everyone knows Rosebud. I certainly knew Rosebud.

I also knew that the film had something to do with magnate William Randolph Hearst. And I was reminded by friends as we sat down to watch that the cinematography was groundbreaking, not so much for the individual techniques as for how they’re combined into one film—things like deep-focus shots and montages that collapse time and space. At the beginning of the film, we pan up, up, up, and the way it’s cut implies the imposing grand estate; later, a number of montages move us through time rapidly, most notably in a famous shot with the Kanes at the breakfast table.

What I wasn’t prepared for was Charles Foster Kane himself—Kane the icon, the gazillionaire, the celebrity; Kane the “yellow journalist,” inciter of wars, original clickbait maven, selling papers with sensationalism and pooh-poohing members of the establishment up to the moment he just buys them. Kane dancing with a chorus line of girls in his newsroom. Kane sweeping the president’s niece off her feet.

Not long into the film, all this started feeling mighty familiar.

By the time we got to the iconic scene in which he’s on stage, speechifying at the political convention, backstopped by an enormous banner with his own face on it, the resemblance became overwhelming. “Every straw vote, every independent poll shows that I’ll be elected. Now, I can afford to make some promises. The working man—the working man and the slum child know they can expect my best efforts in their interests,” Kane says, swinging his arms to punctuate the vague promises and getting interrupted by applause every other sentence. “The decent, ordinary citizens know that I’ll do everything in my power to protect the underprivileged, the underpaid, and the underfed!” He gesticulates and grins. The crowd goes wild.

One of my friends leaned over and said, “Oh—it’s Donald Trump, just with Bernie Sanders’s ideas.”

Trump, indeed. As commentators from across the political spectrum have noted, one of Trump’s defining features is that you can plausibly imagine him on any side of politics. He is a showman, interested in ruling over principle, fond of vague promises, clearly formed by being around the media business so long—and from being rich enough not to care about offending other powerful people along the way.

I was lucky enough to get my hands on an advance copy of Patrick McGilligan’s book Young Orson: The Years of Luck and Genius on the Path to Citizen Kane right before I watched the movie (the book is out from HarperCollins on November 17)—it’s a great, thorough, compellingly-written biography of Welles that focuses on everything that led to the film. In it, McGilligan writes:

Orson considered it essential that the central role [in Citizen Kane] not be Hearst, per se. Rather, Orson wanted to craft a fictional “composite” that would borrow elements from many public figures: a type, an archetype. “There were and are Americans who want to be kings or dictators or leaders,” in Welles’s words. For such men, those he dubbed American sultans, “politics as the means of communication, and indeed the nation itself, is all there for his personal pleasuring.”

I’m not sure I can imagine anyone who fits that description more than Donald Trump. That Citizen Kane gives us a character from a different age who could be dropped down comfortably into our own is a remarkable achievement—and, I think, a reminder of our need for us to revisit it repeatedly. In a political age dominated by American sultans, Kane’s still-entertaining story is also more like a mirror than ever—a mirror that foretells something dark.

That’s because the film acts on at least some level as a cautionary tale. In that famous final sequence, when the camera pulls back to reveal seeming acres of crated-up acquisitions in Kane’s vast, unfinished Xanadu, everyone in my living room instantly thought of the final shot of Raiders of the Lost Ark—itself, of course, a conscious homage to this film.

But I also scribbled down “Ozymandias.” You read Percy Shelley’s poem in middle school; here it is again, a fitting epitaph for Charles Foster Kane:

I met a traveller from an antique land

Who said: “Two vast and trunkless legs of stone

Stand in the desert. Near them, on the sand,

Half sunk, a shattered visage lies, whose frown,

And wrinkled lip, and sneer of cold command,

Tell that its sculptor well those passions read

Which yet survive, stamped on these lifeless things,

The hand that mocked them and the heart that fed:

And on the pedestal these words appear:

‘My name is Ozymandias, king of kings:

Look on my works, ye Mighty, and despair!’

Nothing beside remains. Round the decay

Of that colossal wreck, boundless and bare

The lone and level sand stretch far away.”

Next up: Dr. Strangelove.