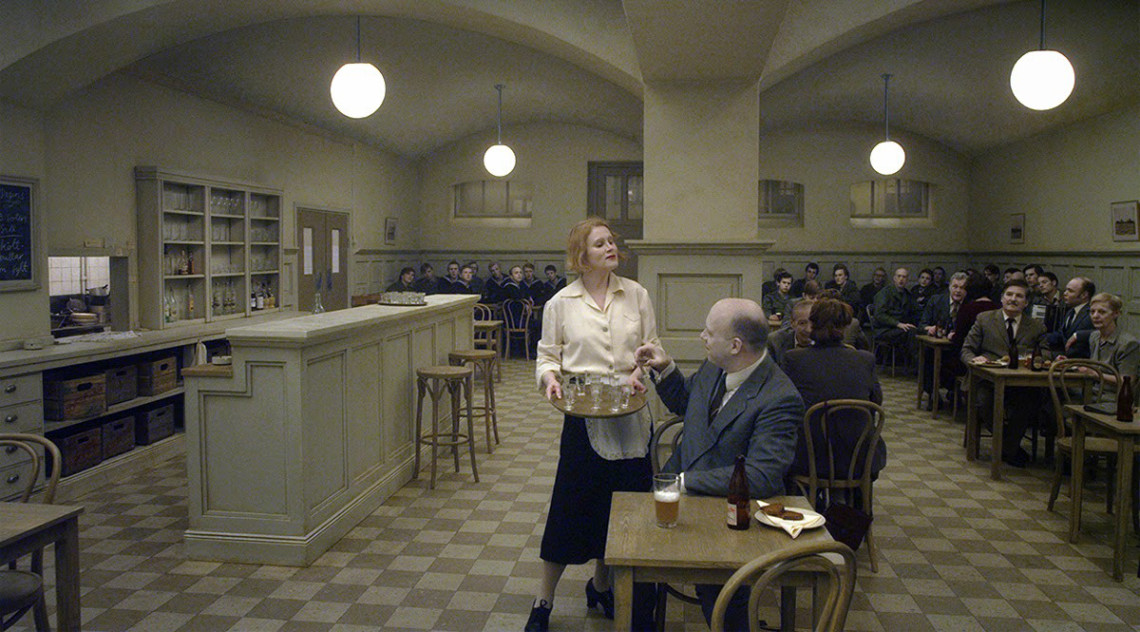 “A Pigeon Sat on a Branch Reflecting on Existence”

Together, the three films of Swedish writer/director Roy Andersson’s “trilogy about being a human being” are like a parody of European art cinema brought to life. Each has been a co-production mainly between Scandinavian countries, featuring the whitest white people on Earth (purposefully whitened even more with chalk-pale makeup) participating in slow-paced, po-faced absurdist vignettes. It’s the very driest of humor, alienating to a good number of casual observers. For heaven’s sake, this newest and final film in the trilogy is actually called A Pigeon Sat on a Branch Reflecting on Existence. The Simpsons couldn’t make up a better fake arthouse marquee.

Mileage always varies on such offbeat fare. If you’re already in the bag for Euro art film or Andersson specifically, Pigeon will likely hit home. This fresh from seeing it, I prefer the first film in the “living” trilogy, Songs from the Second Floor, whose allegorical tableaux built a consistent, mounting sense of dread. Pigeon aims more for laughs (or sensible chuckles, at least), to hit-and-miss results. Of course, you can’t really judge the purposefully weird air of the film by any standard metric of build-twist-punchline comedy, but there’s some dead space in the running time, regardless. The viewer’s meant to reflect the same as the eponymous pigeon, but I sometimes just wound up tapping my toe.

Pigeon doesn’t have a traditional plot; the aforementioned vignettes are for the most part disconnected, save their common setting in Gothenburg and a few recurring characters, such as a luckless pair of joke item salesmen. Each bit unfolds as a macabre diorama of existential musing. A man wrestles with his dying mother over a purse full of valuables, which she insists she’ll be able to take to Heaven with her when she passes. A dance instructor makes “subtle” moves on one of her students. A cafeteria full of people has to decide who will take the food paid for but untouched by a man who’s just expired. The movie’s sensibility is the deadest of pans. There are almost zero camera movements. The actors within each stage shuffle through many of their movements like zombies, the effect aided by that ghastly makeup. It’s alienating but unique, and rather humorous, if you can go with it.

At multiple points, characters pull out their phones, whereupon they all recite the same refrain — a dull variation on “I’m fine, how are you.” Human life as seen by the eponymous pigeon (which is a taxidermied museum specimen) is stilted and uncomfortable and repetitive. Some skits take place in the past, suggesting that people have always been this way. A man in a restaurant speaks of coming there since he was a boy — cut to the same restaurant in the 1940s, looking nearly identical.

Sometimes, rather than taking the audience to the past, the past abruptly marches upon the present; literally, as the army of King Charles XII commandeers a modern coffee shop. One of the last segments features a casual, horrific act of creative colonial brutality. In this Gothenburg, the dull stones of today are paved over the crushed bones of yesterday. Humans can’t find peace or fulfillment or love because they’re too cruel or poor. It’s horrible and depressing … but also kind of funny. A Pigeon Sat on a Branch Reflecting On Existence settles itself into that idiosyncratic cross-section of tone, between bleakness and humor. It’s not always engaging, but if existential satire is your thing, it’s definitely fun to think about afterwards.