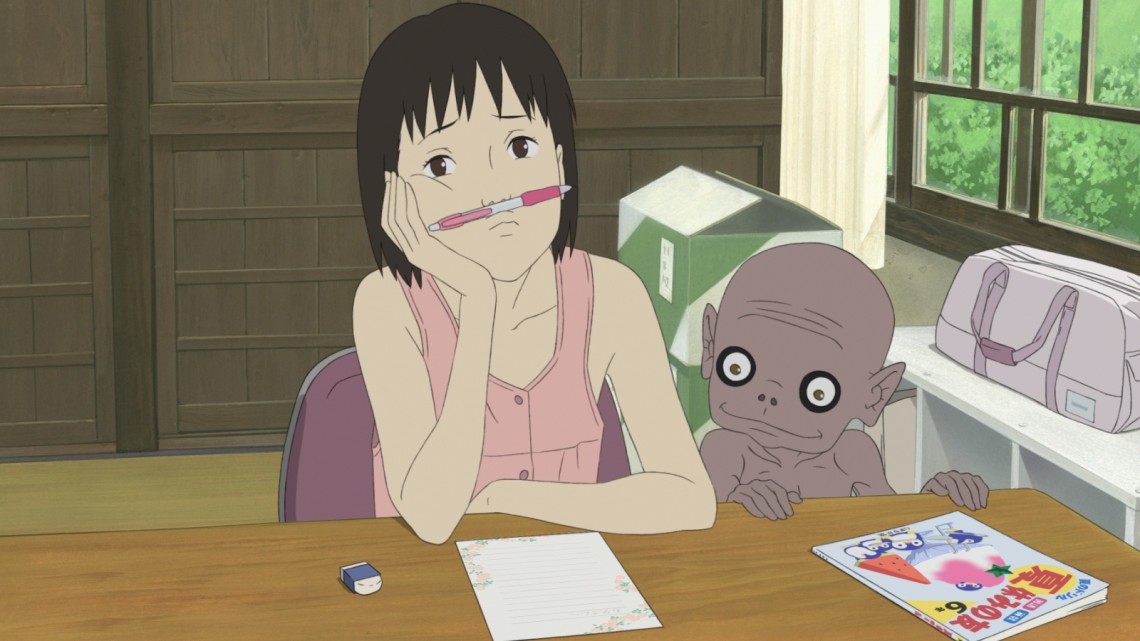 “A Letter to Momo” Aims Right For The Feels

Mom’s out all day, and the house is haunted by goblins; guess that means we’re learning valuable lessons about family and loss. That’s A Letter to Momo in a nutshell, a bit of light lifting that wraps a morality tale up in all the ghostly accoutrements of supernatural whimsy. Ostensibly, it’s a children’s movie, though it’s a children’s movie in the same vein as much of Pixar’s filmography. (In fact, in another reality, it would have fit in very nicely as a minor entry alongside the likes of Monsters, Inc and the Toy Story pictures.) There are a few brushstrokes of darkness beneath its magical veneer.

So as not to accord A Letter to Momo too much high praise and skew expectations, it’s only a mostly successful film, which is to say that it’s good but not great. There’s nothing wrong with that, of course. Most movies tend to be fairly disposable, and of those that aren’t, most end up being passable. A Letter to Momo is neither of these, but it’s also a few editing sessions short of what it could have been. There’s a classic hiding within the film’s two-hour framework. Hiroyuki Okiura simply didn’t fully coax that picture onto the screen.

But he still managed to make a lovely, wonderful movie about childhood and the gulfs that form between kids and their caregivers, so bully for him. Okiura’s heroine is Momo (voiced by Karen Miyama), a young girl whisked away from her bustling Tokyo life to the remote, culturally laid back island her mother (Japanese singer Yuka) grew up on; they’re escaping the sudden and tragic death of the family patriarch, Kazuo, more than they’re actually escaping the city. Yet Momo remains figuratively haunted by her final frigid exchange with her dad, a quarrel rooted in misunderstanding, even as she comes to be literally haunted by a trio of mischievous imps sent on a mission from on high.

They make mourning fun. At the very least, they make it wackier. Momo has enough on her plate without bumbling spirits – Iwa (Toshiyuki Nishida), Kawa (Kōichi Yamadera), and Mame (Chō) – making a mess of her already messy life, but they provide a welcome distraction from grief. She just can’t figure out why they’ve appeared, and none of them is willing to say. Adults will quickly be able to decode the central mystery here, or suss out the details enough to make an educated guess, but A Letter to Momo really isn’t for them. It’s for their kids. If you need proof, then let the film’s one well-timed fart joke do the talking. Your whippersnappers will probably laugh their pants off.

Which isn’t to say it’s not fun for the older set, either. There’s plenty here to keep those of us who have put away their childish things occupied, chief among them Okiura’s captivating and beautiful brand of animation. As with so much Japanese animated fare, the character movements here are astonishingly fluid. These characters walk and talk with a sense of corporeality, in the utmost defiance of their cel-shaded DNA. Chalk the quality up to experience – Okiura has been in the animation game since the late 80s, and has varying credits on films ranging from Jin-Roh: The Wolf Brigade (which he directed), to Paprika (on which he was a key animator), to both Ghost in the Shell films (where he served as animation supervisor). If A Letter to Momo didn’t boast its share of visual wonder, it’d be something of a shock just looking at his resume.

He gets his plot right, too, mostly; Okiura’s stumbles reveal his weaknesses as a narrator, though to his credit they’re few even if they’re noticeable. For one, he’s explicit when he should be nuanced. Too often, a stray line of dialogue here or there betrays Momo’s thoughts when a lingering shot of her face (brought to expressive life through Okiura’s animation) would more than suffice. And for another, the film is about 15 minutes too long thanks to some shoddy, overeager editing that desperately wants to tie up every loose end in a bowline. The Lord of the Rings: The Return of the King couldn’t get away with having five thousand denouements. Neither can A Letter to Momo.

The film remains a delight in spite of its flaws; it’s moving and hilarious in all the right places, the characters are charmingly robust, and, again, the animation is sterling.  Who cares if there’s a better film to be cut out of A Letter to Momo‘s frames? If the experience of watching is exhausting, it’s no less rewarding.