We don’t know why Edgar Wright was dismissed from Marvel’s Ant-Man, despite all the clicks that newswire writers have churned out of it, but one generalized explanation seems undeniable: whatever Mr. Wright was interested in making wasn’t enough of a sellable product, for either Marvel or parent company Disney. That’s something we should keep in mind while following alongside set photos and spoilers for Avengers 2 and Star Wars, Episode VII: these are not meant to be works of art. They are products, made for the express purpose of earning your box office dollars, all so company shareholders will feel secure in the future of their investment. Nobody up top cares in the slightest if these pictures are any good. Studio movies, big and small, are all just different-labeled cereals on the supermarket shelf that is the multiplex.

Phil Lord and Chris Miller, directors of Cloudy with a Chance of Meatballs, 21 Jump Street, and The Lego Movie, are well aware of that. Their films – especially their new one, 22 Jump Street – are explicitly about the product-ness of studio filmmaking, and how that product-ness can overwhelm every other aspect of those films. Cloudy and Lego, for instance,were both edited with a studio-trained maximalist’s eye; they’re children’s films constructed like Michael Bay movies – which allowed Lord and Miller to reveal (and revel in) the silliness inherent in oversized action pictures, as well as the tired, overused formulas used to create them. 21 Jump Street, in turn,attacked itself: it was a reboot about a reboot, complete with Nick Offerman’s character joking that “now all we do is recycle the same bullshit over and over again.” Now 22 Jump Street continues the practice, this time turning its eye to the cottage industry of same-as-the-first sequels.

22 Jump Street does that by being the exact same film as 21 Jump Street, in a macro sense. 21 saw officers Schmidt (Jonah Hill) and Jenko (Channing Tatum) investigating the denizens of a high school to find the supplier of a new synthetic drug, so 22 sees them investigate the denizens of a college for the same. 21’s debrief scene saw Ice Cube say of a dead kid, “he’s white, so people actually give a fuck,” so 22’s debrief scene sees Hill’s Schmidt celebrate himself for giving a fuck about a dead black girl. 21 saw Schmidt meet a romantic interest after being forced to sing in public, so 22 sees him do the same thing after a public slam poetry performance. In one early scene, Offerman’s superior officer demands (after an opening chase filmed with an atypical aesthetic) that they go through their next mission (movie) exactly the same way they did their first one. 22 Jump Street is about movies like The Hangover Pt. II. This is a movie about the fact that this is a movie that has been made before. This is a product that engages with its own product-ness. 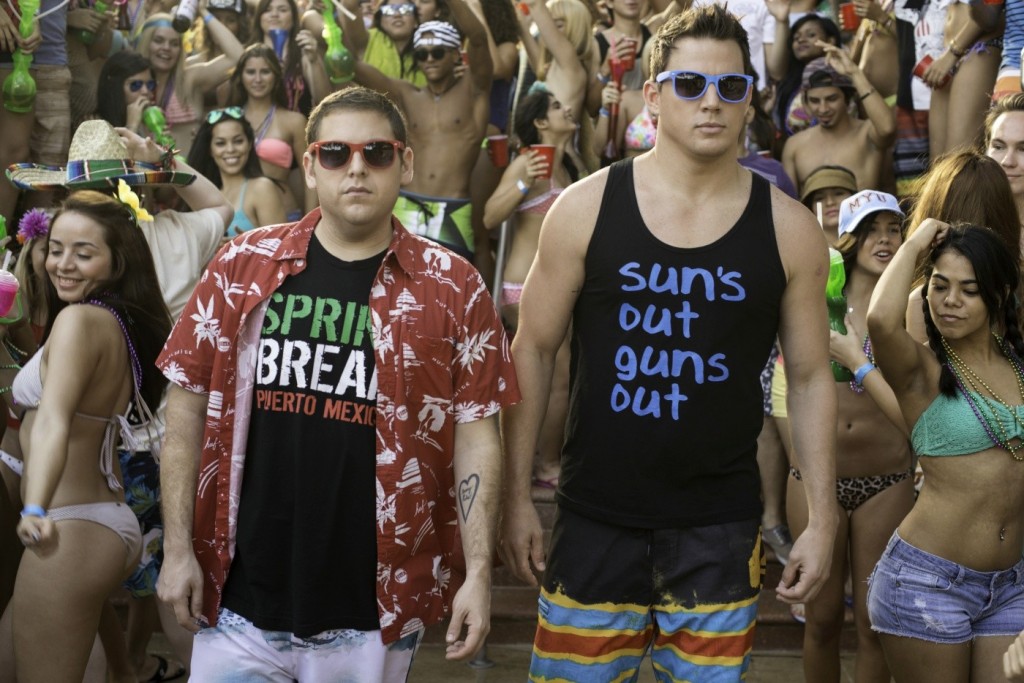 So even the first film’s structure is replicated, beat-for-beat: at the end of 21’s second act, the pair’s partnership flailed after a chase scene caused Schmidt to miss a school play; the end of 22’s second act sees the same occur, only this time, it’s because a chase scene causes Jenko to miss a football game. Lord and Miller use this meta-narrative to work through their professional anxieties – a fear of sequel and reboot-itis, and of making the same films that their peers are already making. Twins abound within the frames of 22 Jump Street, and that’s what this film is, 21 Jump Street’s twin: It looks the same, but the details – the jokes, the sight gags, the humor itself – are different. Lord and Miller are arguing that the problem isn’t that Hollywood is telling the same stories twice – the problem is that we’re not re-telling those stories well enough.

As such, this second bite at the Jump Street apple is indeed packed full of goofy new gags, different gags, all of them expertly filling up the 2.35:1 frame. There’s a car chase that zooms across a long shot from left-to-right, then immediately again from right-to-left, Benny Hill-style; a drug trip that sees Channing Tatum land on the sunny-skies right-side-half of a split-screen while Hill is stuck in the red satanic left-side-half (recalling a gag from Lego, actually); a sequence where Schmidt and Jenko display their dorm-room wares to the camera, with descriptive on-screen text (via a font right out of 1950s TV advertisements) filling up the empty space in each composition. Even the images themselves are crisp and clear; these two Jump Street movies are as bright and colorful as any animated feature; unplagued by that omnipresent grey sheen that characterizes most digitally-shot movies. Lord and Miller have candy-colored, idiosyncratic eyes, for both jokes and for color – they’re well worthy of oft-made comparisons to Frank Tashlin.

At one point in the movie, they crosscut between Hill creeping down the halls of a barely lit library, and Tatum playing in the school’s big football game. They cut directly from Hill walking down the hallway, with only the center third of the frame illuminated by light, the outer ends pitch black, to a shot that tracks on top of a white chalk line – also center-frame – on the football field, leading up to Tatum. The edit keeps our eyes on the same portion of the frame from one shot to another, while creating a distinct, pleasurable contrast in color. It’s hardly profound, but that’s indicative of Lord and Miller’s intelligently constructed visuals – and “intelligently constructed visuals” is an attribute we can place onto very few studio films these days. That’s what truly puts their work above that of their studio-comedy peers: it’s their eyes, not their taste for metatextuality (that’s just texture). Maybe this is product, maybe this is art, and maybe it’s both. Either way, to borrow a phrase from Francois Truffaut, “it is certainly cinema.”