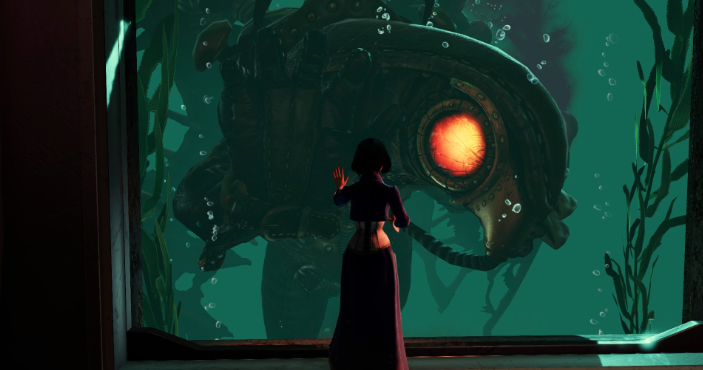 A few months ago, after the release of Bioshock Infinite, a colleague of mine had finished the game and took to twitter to quickly exclaim that Hollywood should get a movie version in production as soon as possible. All I could do was cringe. A younger me would have thought this was the best idea ever. But now it only serves to make me groan. Not because I have issues with the idea of a video game being turned into films, but because it seems so wholly unnecessary. As games become more and more sophisticated in their production values and storytelling, it becomes less and less ideal to try and adapt that into a cinematic presentation. Most of all, when it comes to storytelling in triple AAA blockbusters, video games are simply doing it better than movies right now.

I can sense eyes rolling as I type that, to be honest. Video games still carry a huge stigma as largely being a niche hobby for nerds and the like. There’s also a certain limitation on just what kinds of stories video games can tell. You’ll probably never see a video game version of a Terrence Malick or Lars Von Trier film anytime soon (although a video game of Antichrist sounds kind of amazing). The vast majority of video games reside within genre’s that promote interactivity. There has to be action in a game. Not always action as we define in cinema, but just the base definition of it: action and reaction.

So how can a medium filled with such things be telling better stories that most movies? Simple: they’re not subjected to creative restrictions the way films are these days. Games are, like films, a collaborative process, but we’re seeing more and more video game developers taking creative risks and encouraging their writers to utilize their voluminous imaginations. There are no executives and bean counters wringing their hands over whether or not certain things will play to audiences. Developers can construct a massive space epic trilogy and inject some of the most nuanced and dense character development seen in video games, and still make the action exciting and entertaining.

If we continue to look at Bioware’s Mass Effect trilogy, we also notice how the medium is telling stories only possible within that medium. Commander Shepard, our lead, is a character defined by the player. The player determines all the character’s race, gender, sexuality, and relationships, and the game has the same quality of storytelling no matter which paths are chosen.

I don’t need to tell you how important it is to have the option of a non-white, non-male, non-heterosexual lead in a massive blockbuster trilogy. These games see the player creating, essentially, their own film as each game progresses. The element of choice is so vital to these games that to take that away would be to strip them of their meaning. It’s a story that can only be told within the video game medium.

Even the games that are completely written on a pre-determined path, like Naughty Dog’s Uncharted series, are better movies than anything studios are pumping out these days. They’re thrilling treasure hunt films filled with incredible set pieces, visuals, and most importantly, razor-sharp scripts and acting. The characters each have their own memorable identities and personalities, and every exchange of dialogue is just as well written as the last. There’s even a hummable score! It’s exactly the kind of film we’re missing these days, and yet it’s acutely aware that it’s a video game.

Naughty Dog’s latest, The Last of Us, takes it a step further in a immersing the player so fully in the story, characters, and world that it presents, that I was often dumbfounded by the fact I was playing a game at all. I was living this story, and every plot progression, character beat, and moment of action is so organic that I can’t for the life of me figure out why this level of storytelling isn’t present in movies of this scope.

All that said, there’s only one game I feel has truly touched upon the possibilities that cinema can reach. I mention earlier that you’d never see an art-house video game. That might not be necessarily true, thanks to Thatgamecompany’s (yes, that’s really their name) masterpiece, Journey. A wordless tale of a wanderer in the desert drifting through the ruins of a civilization, it’s a transcendent meditation on life, death, and rebirth. A symphony of music and motion, it breaks down all barriers of video game conventions in ways that I dare not spoil here. There’s one revelation in particular that should only be discovered after completing the game, and it’s one that made me realize that one of the greatest silent films ever made was only possible as a video game. What could possibly be added by turning something so pure into a movie?

It isn’t that one medium is necessarily above the other in any condescending fashion, but rather that one has evolved so rapidly as a method of storytelling, while the other seems stalled out. When the stories and characters of one medium are this good, what value is there in trying to turn them into live-action films? Obviously, adaptation is not a bad thing. Plays, books, and poems have been turned into films for decades, but from a written medium to a visual one. Is there anything to add to the Uncharted games by turning them into a Mark Whalberg vehicle? Instead of just insisting on trying to make money off audience crossover, why not take inspiration from the great games at our disposal? Insist on making better films instead of just lazily and cynically retelling video games’ stories.