Surviving adolescence can often feel like a fight against collapsing forces. In Kiruna, the small Arctic town that is the setting for the Swedish Broken Hill Blues, the ground is literally crumbling beneath the characters’ feet.

The entire village is succumbing to the effects of the iron-ore mine on which it sits; earthquakes have become commonplace, and no one knows how long they have to vacate before their own homes sink. The land itself has been cracking for decades, a somewhat obvious metaphor for the cracking psyches of the town’s adolescent residents. Markus (Sebastian Hiort af Ornas) ditches school to work on old cars, while Daniel (Alfred Juntti) partakes in gang violence as a reaction to his father’s alcoholism. Both actors combine a plain delivery with occasional, emotional outbursts, which can be jarring. Lina Leandersson, who has grown up into a young adult since her notable performance in 2008’s Let the Right One In, plays Zorin, a melancholic swimmer with a keen eye for photography, much like the film’s own director.

It comes as no surprise that screenwriter and director Sofia Norlin was granted a scholarship from the Ingmar Bergman Estate for the writing of Broken Hill Blues. Her style seems heavily influenced by the Sewdish auteur, with long shots of stark landscapes, reverberating sounds and the use of stoic voice-overs. Young Daniel even tromps through the snowy wasteland sporting a somber black hoodie, immediately reminiscent of Bergman’s Grim Reaper. Though while the cinematography by Petrus Sjovik is stunning and the images create a lovely cinematic poetry that comments on life’s futilities, the film’s beauty doesn’t make up for its complete lack of plot or direction. The amount of dialogue continually decreases to the point where it becomes non-existent for the final third of the film. It is frustrating to watch these teenagers seemingly do and say nothing, though the frustration felt as a viewer must be intentional on Norlin’s part; we’re supposed to feel as trapped and unsure as her characters. Considering Broken Hill Blues is Norlin’s first feature, I have little doubt that with a little bit more script development for her next project she can add a compelling story to go with the beautiful shots. 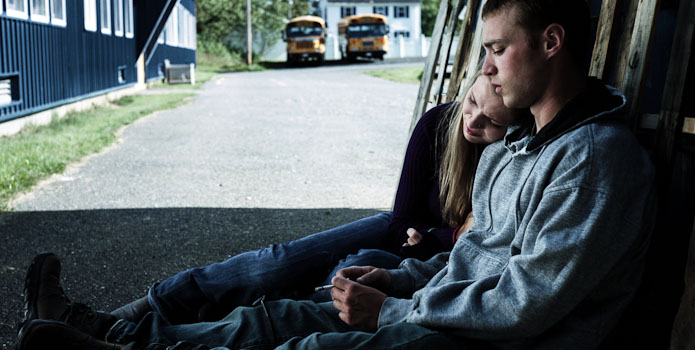 “Good people make bad choices,” says Casper Cote (Emory Cohen) early on in Beneath the Harvest Sky, which could very well have been the film’s alternate title. In the coming of age drama, writer-directors Aron Gaudet and Gita Pullapilly examine the anxieties of teenage life in a remote, Maine town where drunkenly chasing moose is a viable weekend activity.

Casper and his best friend Dominic (Callan McAuliffe) are high school boys with two different upbringings and two very different ideas on how to advance their position in life. During a school break for the area’s harvesting season, Dominic takes a job on a potato farm and dreams of buying a red sports car to high tale it down to Boston after graduation, while Casper begins working for his estranged father (Aiden Gillen), smuggling prescription drugs from across the Canadian border. Gillen is a more convincing bad guy on Game of Thrones, where he plays the conniving Littlefinger. His persona is a bit more conducive to the wily schemer than it is to a threatening drug dealer. But the film’s lead performances are both superb. Unlike the stoicism of the two in Broken Hill Blues, the teenage boys of Beneath the Harvest Sky are wonderfully fleshed out characters, which allow the talented young actors to shine.

The paths the two head down can be somewhat predictable; in these types of stories the downfall of the “good” friend almost always comes as a result of the “bad” friends actions. Though you can see it coming, it doesn’t make the climax any less heartbreaking. The film’s only real issue would be the heavy handedness of some of the dialogue and imagery that repetitively state the naiveté of the teenage characters. Shots of crucifixes and childhood toys while Casper and his girlfriend fondle each other on her bed, for example, want to constantly remind us that they’re immature children, as if their attitudes didn’t get the point across enough. Gaudet and Pullapilly have clearly drawn from their documentary filmmaking background for this piece. Their small Maine town and its inhabitants provide an authentic representation of teenage angst. Beneath the Harvest Sky offers a genuine view of what it’s like to grow up in rural poverty, where dreams can often be crushed by reality.