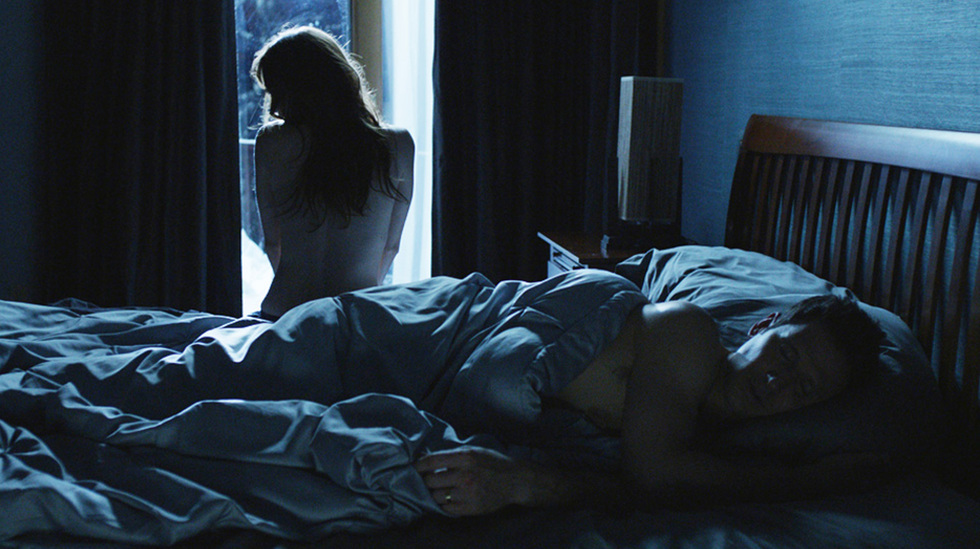 Joss Whedon is no stranger to high-concept sci-fi and fantasy, having written Buffy the Vampire Slayer, Angel, Firefly, Serenity, Dollhouse and The Avengers, which he also directed, as well as the sequel Avengers: Age of Ultron, which he is in the midst of directing. But Whedon also has a tiny indie side to him, as was revealed last summer with the premiere of his modern adaptation of Much Ado About Nothing, which he shot in 12 days in his own home in Santa Monica. In Your Eyes, which he wrote and produced, and was directed by Brian Hill, manages to combine Whedon’s big, sci-fi ideas with a subdued, indie romance.

One winter day in New Hampshire, a young Rebecca sleds down a treacherously snowy hill. Meanwhile in the deserts of New Mexico, young Dylan acts out in his classroom. When Rebecca speeds down the steep incline, Dylan becomes simultaneously frightened. When she slams head first into a tree, the impact knocks Dylan unconscious. Since that moment the two have been telepathically linked, though their connection doesn’t become evident until years later.

As adults, Rebecca, played by a wispy Zoe Kazan, is an affluent housewife and Dylan, played by Michael Stahl-David, has recently been released from a prison stint.  Growing up they had only felt fleeting moments of the other’s presence in their minds since that fateful experience. But then one unspecific day, their minds begin to meld even further, and they can see one another’s sights through their own eyes. They begin a kind of telepathic relationship with the type of adorable flirtations that one would be inclined to partake in only when you can hear someone else’s voice, see what someone else sees and feel what someone else feels. Rebecca and Dylan can’t read each other’s thoughts, but their connection becomes like a sixth sense. It begs the question, what kind of things would you do and say if you knew someone else was always listening to you when you speak and tangibly felt everything you touch?

It’s an intriguing concept, and the element of destiny comes into play as the two begin to question their given circumstances and opt instead to pursue a relationship with someone they’ve never met. It’s not an odd scenario by any means, considering how many relationships begin these days over the Internet or via smart phone apps. Though one would think that Dylan and Rebecca would maybe pick up the phone and call one another so that they don’t always look like scizophrenics when they converse. Yet during those scenes in which Dylan and Rebecca get to know one another by talking through their heads, it can get a bit dull; like in fact watching people talking on the phone. But the actors really put their effort into these scenes where they obviously had to act alone and their performances are both believable and charming. Despite not being in the same place, the two have quite the chemistry

Mark Feuerstein plays Rebecca’s husband Phillip, a wealthy and well-respected doctor whose bland yet misogynistic personality makes one wonder why a manic little pixie like Rebecca would agree to marry him. Early on in the film he blocks a waiter’s attempt to refill his wife’s wine glass. When, across the country, Dylan is hit in the back with a pool cue, knocking Rebecca to the ground, we then see the cause for Phillip’s concern; he thinks she has some sort of neurological disorder that might be induced by increased consumption of alcohol. But later on when he tries to explain schizophrenic narcotherapy to her by saying, “It’s a big word hun,” we realize that this guy is just a controlling, patronizing jerk.

As far as romances go, In Your Eyes offers plenty of sweet moments and a fascinatingly different erotic scene that all make for a nice film to watch when one gets into that mushy kind of mood. But in its quest to fit into the romance genre it does suffer a few expired gender stereotypes. For example, when they reveal themselves to each other for the first time by looking at themselves in mirrors, why is Rebecca’s mirror full length and Dylan’s only waist high? And why is he fully dressed but she is still in a clingy nightgown even though she’s in a time zone two hours ahead? The gender norms continue when he helps her fix a car, and she helps him cook for a date. It hits its peak when Dylan has to rush cross-country for the climax in which Rebecca needs saving.  Despite the borderline chauvinism, In Your Eyes is definitely a nice first step into Whedon’s attempt to site his big-budget fantastical ideas into a smaller, more personal film.

One thought on “Tribeca Review: Joss Whedon’s “In Your Eyes” Asks For Suspension of Disbelief in Exchange for a Sweet Romance”