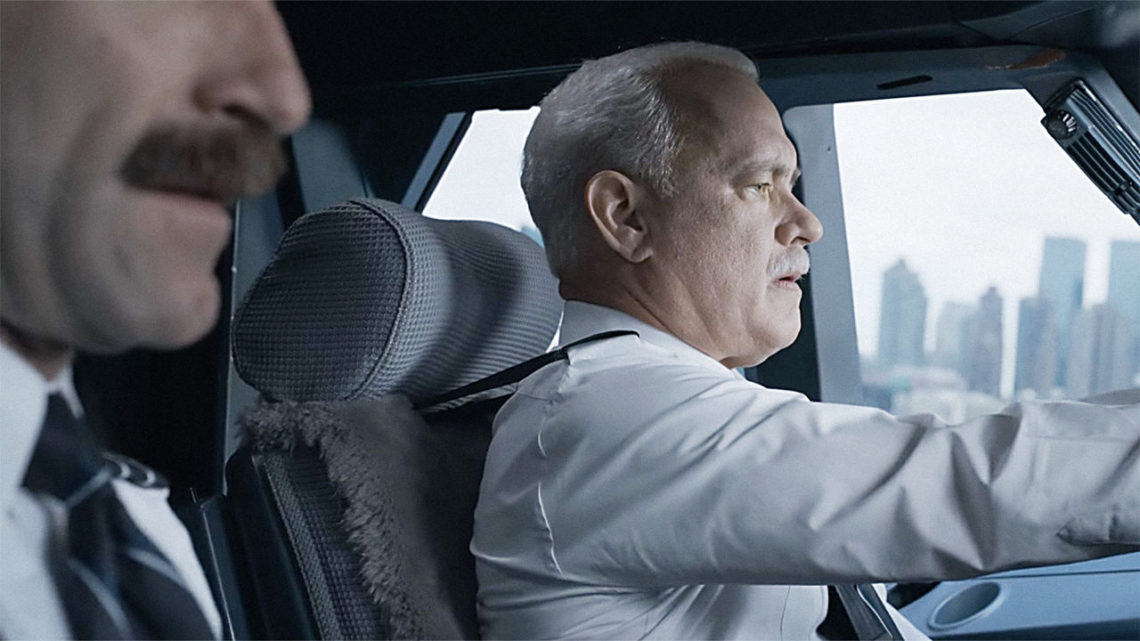 Tom Hanks and the Power of Fear

Noah Gittell analyzes how fear drives the majority of films in Tom Hanks' career, including "Sully."

There’s a new Tom Hanks movie out, which can only mean one thing: another doomed vessel. Sully, in which he plays the real-life airline pilot who made an emergency landing in the Hudson River in 2009, could be considered the third in a meme-inspiring series of roles as the commander of vehicles that seems destined for disaster. Just like in Apollo 13 and Captain Phillips, Sully finds the actor utilizing his everyman persona to tell yet another powerful story of an ordinary man who, when faced with grave danger, responds with courageous calm.

When Hanks takes on one of these roles, it’s not an accident. Fear is the defining motif of his career. On NPR’s Fresh Air earlier this year, host Terry Gross described these characters as having “nerves of steel.” Hanks quickly corrected her: “They are not men with nerves of steel. The thing that has attracted me to all those characters is that they are fighting the terror that is inside them.” Lest it be judged a personal obsession, Hanks can justify this motif with research. When speaking to veteran officers in preparation for his role in Saving Private Ryan, Hanks stated that he was repeatedly told that their biggest fear wasn’t for their own lives. They were afraid of “making the mistake that was going to get other people killed.”

It’s a mature, altruistic sentiment that seems very out of place in relation to some of his earlier, comedic films, in which he played, in his own words, “insecure guys who compensated for [their] insecurity by being funny.” Yet even in these films, overcoming fear was central. In Big, The ‘Burbs, and Joe vs. the Volcano, his characters must also summon immense courage, but without responsibility to others. His trajectory is a universal one. For young people, self-actualization is a reasonable goal, but when you get older and gain responsibilities, questions of the self fade to the background. By looking at his filmography through the lens of fear, we see Tom Hanks growing up. 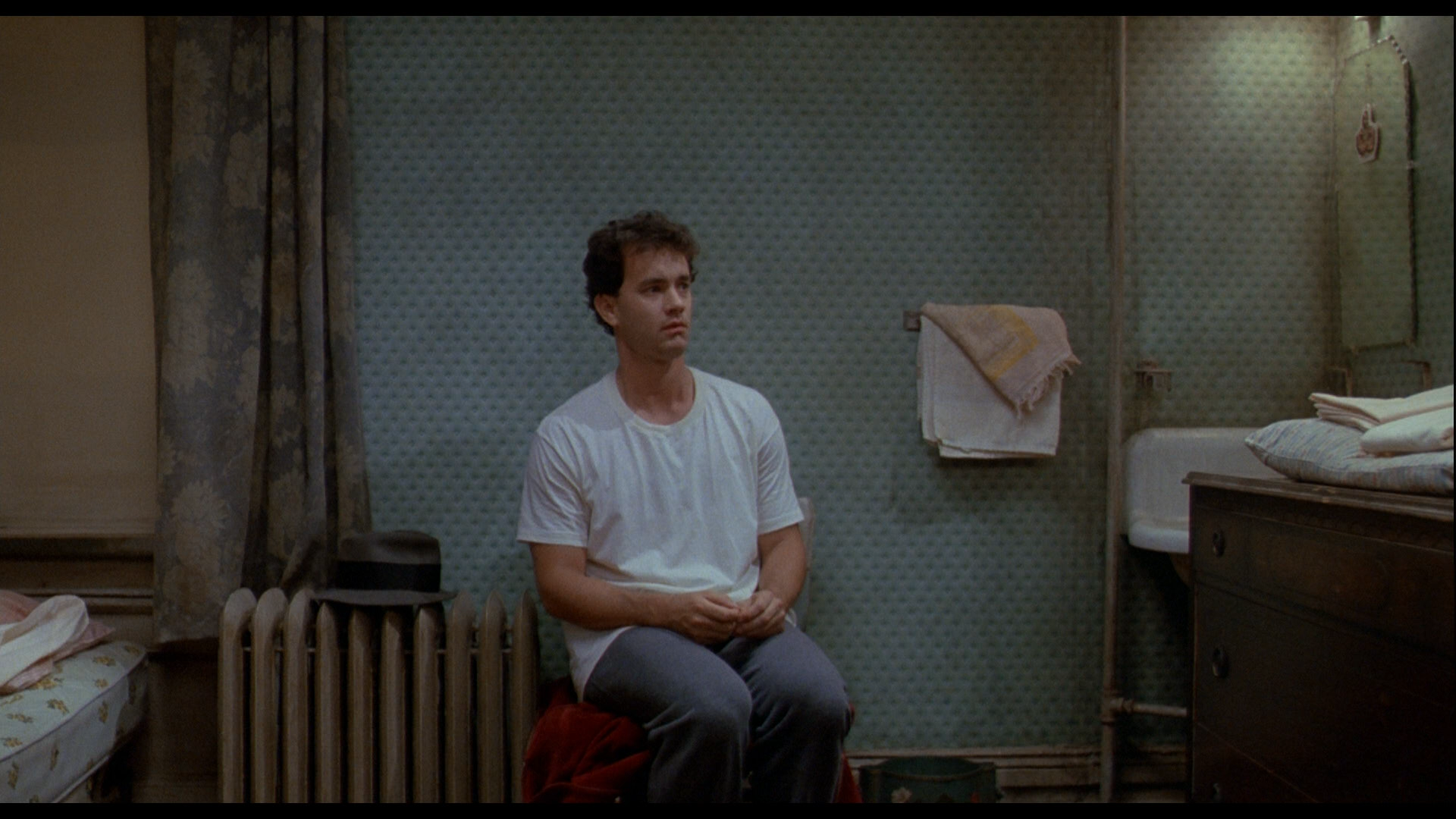 Consider the role that made him a household name. When we think of Big, we remember the fun stuff: his office filled with toys, that loft with the trampoline and pinball machine, and Hanks in that all-white tuxedo eating baby corn with his teeth. But before he could enter that child’s paradise, Josh Baskin had to suffer a long, dark night of the soul. After all, being a 13-year-old kid in the big city, with little money and no prospects, is a terrifying proposition; in one memorable scene, Hanks shows us the depths of that terror. His first night in the city is spent in a seedy hotel, where bullets fly outside his window and an angry foreigner screams outside his bedroom door. Frightened, Josh blocks his door with the dresser and curls up on his bed in the fetal position, his head buried in a pillow. Alone in the city and facing threats from all sides, it’s a child’s worst nightmare.

After Big, Hanks starred in a pair of mostly forgotten comedies based entirely on the centrality of fear. In Joe vs. the Volcano, he’s a courageous firefighter with PTSD who, as the film begins, has retired from the department and is playing it safe in a crummy office job. After being diagnosed with an incurable medical condition and given just months to live, he quits his job and pontificates to his boss about the choices he made that led him there: “Why have I put up with this?” he asks. “It’s fear. Yellow freaking fear. I’m too chickenshit afraid to live my life so I sold it to you for 300 freaking dollars a week.” In the end, Joe gets an opportunity to overcome his fear when, conveniently, a deranged millionaire asks him to jump into a volcano. (See the movie. It makes perfect sense.)

In The ‘Burbs, he plays Ray, a depressed suburban husband and dad who becomes equally terrified and fascinated by the weird, potentially psychopathic neighbors who move in next door. Screenwriter Dana Olsen has pegged the origins of the script in his fear of serial killers as a child. “Where there’s fear, there’s comedy,” he once stated. As Ray and his dimwitted buddies investigate, one gets the sense that he’s not in this for altruistic reasons. This isn’t about protecting his family. Rather, it’s a test of the inner manhood that suburbia has largely robbed him of. Again, he is referred to as a “chicken” for being afraid – in a scene in which he and his friend dare each other to ring the neighbors’ doorbell like a couple of schoolkids. 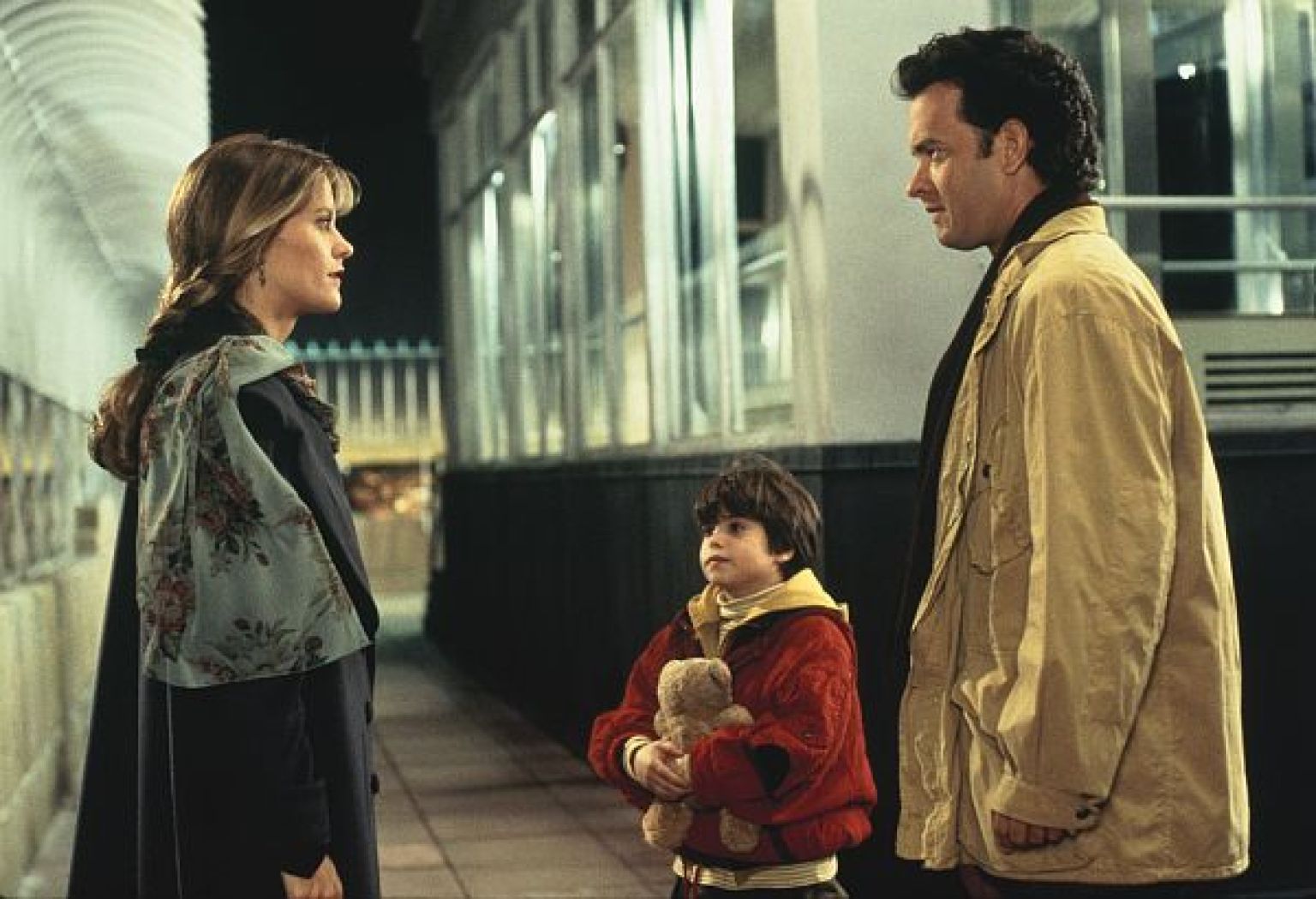 Of course, once we apply the prism of fear to his career, it begins popping up everywhere. Several of his romantic comedies are about fear of commitment or intimacy; Sleepless in Seattle, Splash, and Turner and Hooch could loosely fall into this category. In his forays into animation, Hanks embraces fear as well: his Sheriff Woody in the Toy Story films is constantly afraid of what comes next: being replaced, being ignored, and being boxed away permanently. The Terminal contains a three-minute scene in which the words “fear” and “afraid” are uttered 19 times. Hanks has also characterized this year’s Hologram for the King, in which an aging salesman travels to Saudi Arabia to sell technology solutions to royalty, as being about “the sharp terror of a loss of confidence in yourself.” In that same Fresh Air interview, he explained how he related to the character:

I know I have to get up in the morning and create something I may have an instinctive ability to do or may fail miserably at…When are they going to discover that I am, in fact, a fraud?…There are days when I know that at 3 o’clock tomorrow afternoon, I am going to have to deliver some degree of emotional goods. And if I can’t do that, that means I’m going to have to fake it. And if I fake it, then they may catch me faking it. And if they catch me faking it, well, then, it’s just doomsday.”

A therapist might point out that “doomsday” is an awfully dramatic word to describe a moment of professional failure, the kind everyone experiences once in a while. Hanks’s apocalyptic language hints at an ocean of unseen darkness underneath his happy-go-lucky exterior. We can’t know his obsession with fear is inspired by trauma in his past or how it manifests itself in his inner life, but we do know that it deeply colors his perception of the outside world. When Hanks gave the Yale commencement address in 2011, he said:

“Fear has become the commodity that sells as certainly as sex. Fear is cheap, fear is easy, fear gets attention…. It’s fast, it’s gossip, and it’s just as glamorous, juicy, and profitable. Fear twists facts into fictions that become indistinguishable from ignorance.”

It’s an astute criticism of the modern world that simultaneously explains why Hanks has continued to remain relevant as both a comedic and dramatic actor for so long, even in an age when movie stars who can draw a large audience are nearly extinct. Fear is a universal emotion, which Hanks utilizes in crowd-pleasing stories to which people of all genders, races, ages, geographical regions, and political persuasions can relate.

But if his (perhaps unconscious) career goal is to explore fear for the greater good, his best work may have been in the past. In films like Sully – and his other, more recent dramatic profiles in overcoming fear – we never see his characters act afraid. They bypass it almost immediately in favor of practical concerns, like how to save the lives of their crew or passengers. It’s a noble attitude, but I wonder how much it serves us. Wouldn’t it be more cathartic for an audience to see a character struggle with fear and then find courage? Otherwise, it’s just hero worship. Maybe his early comedies were more thorough, complex examinations of the themes that have obsessed Hanks over the course of his career than his celebrated, awards-laden late period. Hanks may not want to play the funny guy anymore, but that’s where the serious stuff really is.