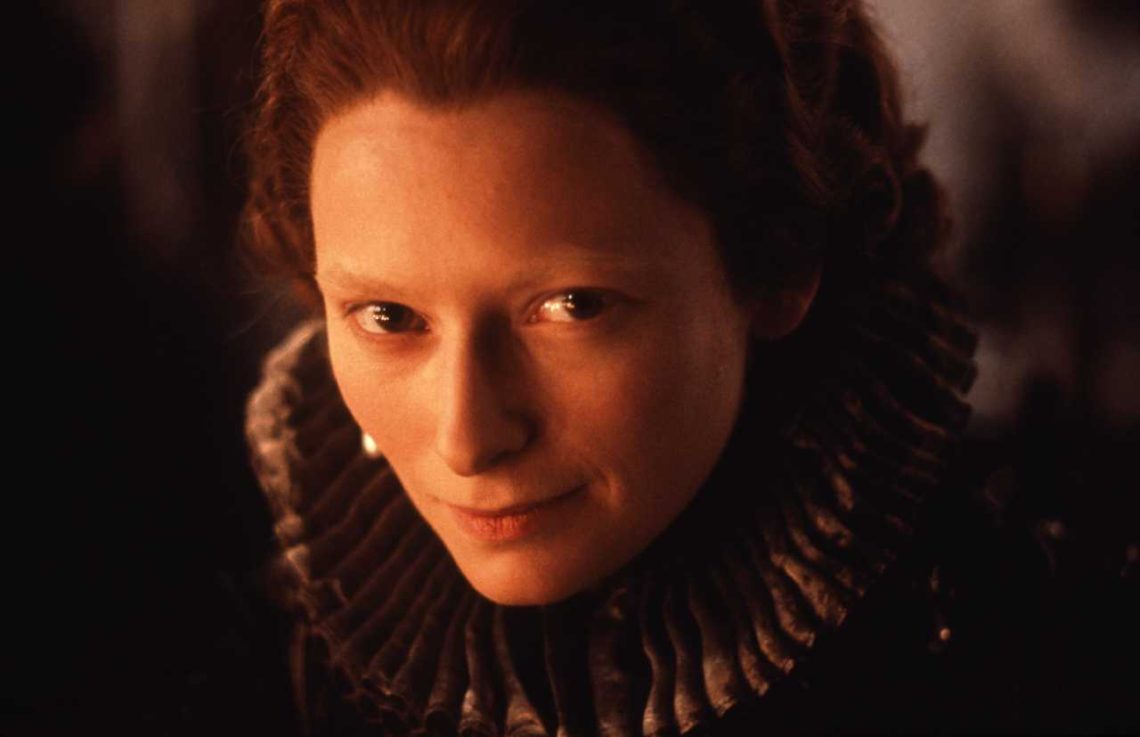 Willow Maclay writes about Tilda Swinton's singular career and its relationship to other androgynous icons.

Within the first frames of Todd Haynes’ queer glam odyssey Velvet Goldmine (1998), the camera lingers on stars and slowly begins to pan downward until a UFO is seen piercing the night sky with neon colors that make it look like an album cover by funk legends Parliament. The UFO warps through the night sky-line in gaudy CGI until the camera settles on an orphanage and we’re to infer that the baby left on the doorstep came from this alien vessel. The child’s name is Oscar Wilde and he’s going to be a pop idol, as was written in destiny by the emerald jewel pinned to his clothing. The emerald was then passed through time but settled on Brian Slade (Jonathan Rhys Myers), a David Bowie-esque figure of glam prominence. Slade became a messiah for a muted voice of young gay boys and girls (and anyone beyond sexes) who had no model, language or guide to function in a world that would rather send them to electric shock therapy to burn these desires out of their body than to let them live freely.

In a record store, one such young gay boy, Arthur Stuart (Christian Bale), finds Slade: statuesque, nude, feminine, draped across an album cover in maroon and marble. He’s immediately drawn to the slender vision of gender fusion because he sees a version of himself. He picks up the record hesitantly and decides to buy it, but is greeted with jeers from macho tough guys who call Slade a “pansy rocker.” Arthur defends Slade’s honor because he knows being a pansy is seen as something wrong, but he takes the album home and finds himself. The makeshift “Lady Grinning Soul” sensuously ripples out of his record player, and Arthur is free. In the same scene moments later, he is seen walking down the street proudly sporting cherries on his T-shirt and a smile on his face. He stands out among the crowd of droll brown and black jackets of passersby with his little pieces of identity sprinkled across his chest. Slade offered a branch out of loneliness. Just buy an album. Put on some lipstick. Be yourself. Become androgynous. Fuck gender.

Tilda Swinton is from the same universe as Wilde and Slade. In a 2011 interview with W Magazine, she evokes the emerald jewel by calling on her celestial inspirations for her own androgyny. She called David Bowie and her father, Maj. Gen. Sir John Swinton, “my aesthetic north stars. The individuals with whom I share the same planetary DNA.” She elaborated further on the place Bowie had in her adolescence in an interview with The Daily Beast in 2008: “He just looked like me, and looked like someone from the same planet as I did, and that was a great comfort to me at the time when I was 13 and 14 looking like that, that someone not only looked like that, but felt proud enough to stick themselves on the front of an album with a zig-zag across their face and a dewy collarbone.” Bowie’s groundbreaking androgyny paved the way for other aliens stranded on Earth. 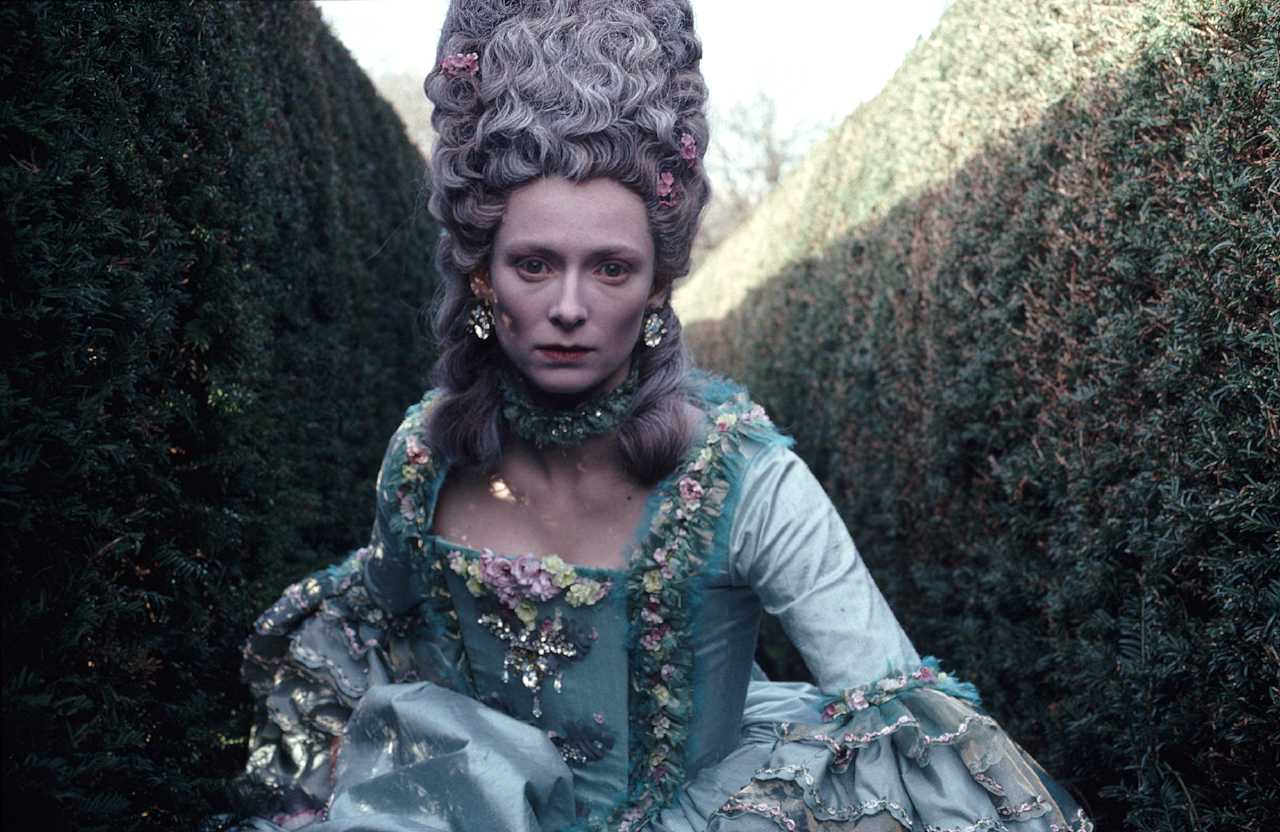 Swinton has followed in Bowie’s footsteps by being an androgynous troubadour of the emerald jewel, and like Bowie, she has cast a long shadow in the art and fashion worlds by more than just mere wardrobe, but through an evolving sense of self that doesn’t prescribe to masculinity or femininity in full measure. Swinton got her start working in the gay art films of Derek Jarman; films like Caravaggio (her first film role), The Last of England, War Requiem and Edward II all bore its director’s stamp of queering the mainstream and finding a center of the homosexual life in times when such history was scarce or burned out of existence. Even more than her films with Jarman, though, perhaps the film most representative of Swinton’s androgynous iconography is Sally Potter’s adaptation of Virginia Woolf’s Orlando (1992), in which she plays a centuries-old figure of prosperity in England who undergoes a change of gender overnight. The thesis of her entire career can be found in Orlando in a line of dialogue she delivers staring directly at the camera: “Same person. No difference at all. Just a different sex.”

The opening scenes of Orlando show a person infatuated with the arts, finding love and living out his life in whatever fashion he may please. Orlando is introduced wearing the fashion of the time with various layers of hosiery and linen. Through voice-over, the film points out his androgyny: “There can be no doubt of his sex, despite the feminine appearance of the time that every young man aspires to.” Orlando is a seemingly normal man, albeit effeminate-looking, until his life is changed abruptly when a dying Queen Elizabeth I (played by Quentin Crisp, one of many examples where men are cast as women and vice-versa in the film) tells the young man to never wither or grow old, and like a spell cast by a dying witch, Orlando lives through the centuries while never aging.

Potter breaks Orlando up into smaller chapters, each given a subheading and delivered in chronological order. After the cross-dressing Queen grants Orlando immortality, the young man falls in love with a young woman named Sasha (Charlotte Valandrey). The only problem with this is that Orlando is already betrothed to a nameless English woman of similar class standing. Orlando ends up losing both of them after thinking he could have some level of ownership over their choices because he is a man. The chapter concludes with Orlando staring directly into the camera and saying, “I can only find three words to describe the female sex, none of which are worth expressing.” In this section, Orlando is a typical love-struck man who thinks he’s owed the company of a woman. Swinton plays the role with a masculine confidence that can only be attained through male socialization. That she can pull this off through body language and assertion of her own masculinity is a testament to her commitment to acting and her inborn abilities to fluctuate between gender.

If the comedy in that chapter was laced with an inner feminism, such undertones are brought to the surface after Orlando, suffering a crisis of masculinity after refusing to serve in a war, suddenly wakes up to find that he has turned into a woman. The shifting social roles are immediate and the gender binary is made abundantly clear with the character’s dress and perspective. Orlando goes from having power to being powerless, and upon returning home from a battle he never took part in, she’s learned that her unidentifiable gender has cost her the property that belonged to her when she was previously male. This unraveling of gendered hierarchies offers a parallel to transgender experiences and transgender cinema. The confusion, difficulty and humor in finding out what it means to be one gender or another is prominent in Orlando, making it an important picture towards an often-neglected area of cinema.

The construction of gender in Orlando is the key to finding the path of both its feminism, queerness and androgyny. “Same person; just a different sex” articulates an idea of how a person can switch between bodies through pure force of will, and while it is a magical change in Orlando, it is metaphorical to both medical transition and performed gender. The assertion of being the same person is especially strong towards transgender individuals who fight for their own personhood when their parents feel like they’ve lost a son or a daughter with an impending gender transition. Those words become a statement of power in the hands of people who choose to transition, because it’s claiming an identity that was never given. In this way, the film echoes Brian Slade (David Bowie) and Arthur Stuart in the record shop in Velvet Goldmine and how it calls out for the potential of finding yourself, especially in media. 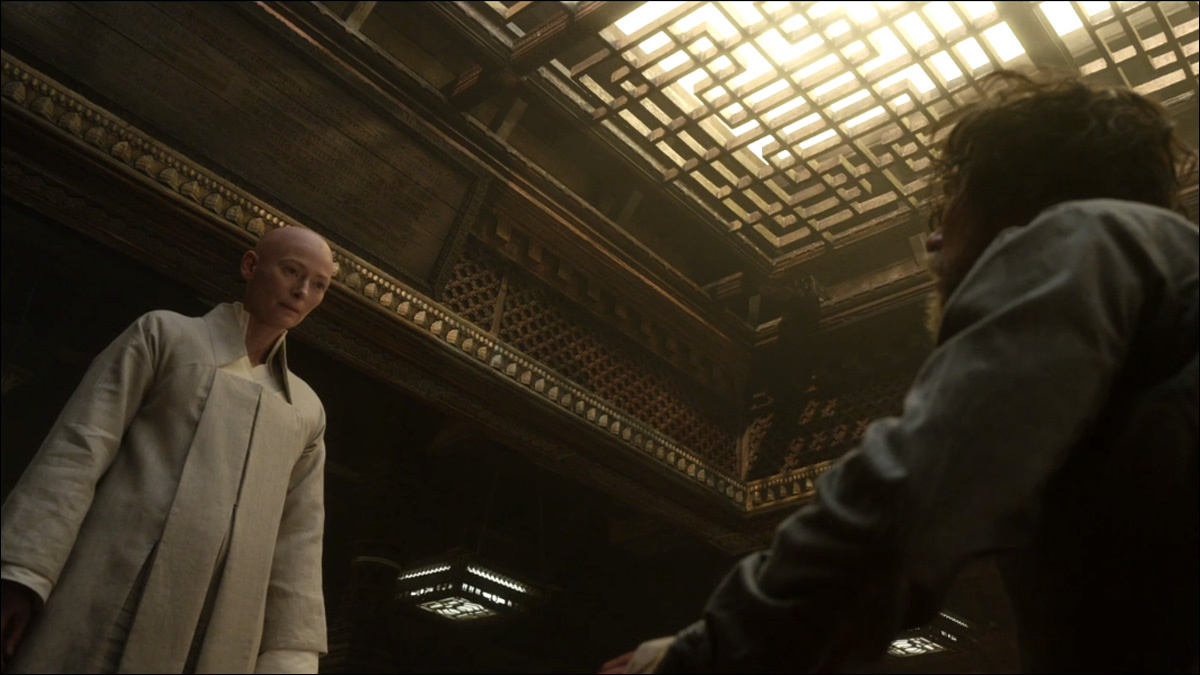 The emerald jewel encompasses the queer lifestyle in Velvet Goldmine and creates a heroic fable out of our stories. Cinema is similarly open to creating a safety net in establishing stories of the disenfranchised, and the term “pop idol” extends to include actors, directors or any artist who becomes a god through visibility. Tilda Swinton’s place as a queer icon is complex, because she is presumably heterosexual, and as Kyle Turner investigates in his piece on her work at Seventh Row, it becomes a question of where she stands within the cultural history of art that is without a doubt expressing queer sentiments. Queerness is about subverting conventional notions of what you are, how you should act, and how things should be by expressing your own humanity through the lens of gender, gender presentation or sexuality. Swinton’s androgyny, as well as Orlando’s, Bowie’s and Slade’s, is definitively queer, because it bucks the traditional standards of how you’re supposed to express yourself.

Race doesn’t seem to figure into her brand of celestial androgyny, however, judging by her decision to take on the role of a Tibetan monk in the upcoming Marvel picture Doctor Strange, sporting a bald head and a slender lanky body. The image goes against the kind of revolutionary queer roles she played in Orlando and in her pictures with Derek Jarman. This is a shame. Androgyny is not simply a tool of whiteness, but too often it is framed around that skin color and that size. Icons of the ’80s like Grace Jones and Prince challenged gender presentation and deserve as much credit today as Bowie and Swinton have been given. Among current artists, there’s, for instance, Mykki Blanco, a self-described multi-gendered, transgender, punk-rock rapper from a riot grrrl background, who is  challenging the very notion of what it means to be gender non-conforming or androgynous. Artists like Tilda Swinton are given the mainstream spotlight because of their movie work, but it is in the underground where these ideas of gender are truly being wrung dry. Even Blanco, though, acknowledges, “I’m basically just doing glam rock.”

When David Bowie and Prince died this year, it shook the foundations of not only the mainstream music world, but the hearts of all the weird kids—now adults—who grew up with an icon that challenged gender norms through performative queerness in music. Prince famously sang “I’m not a woman / I’m not a man / I am something that you’ll never understand / I am something that you’ll never understand” on his hit song “I Would Die 4 U.” Bowie sang “Lady Stardust sang his songs / Of darkness and dismay” on “Lady Stardust.” When both of these men died, there were videos of people flocking the streets to sing songs like “Starman” and “Purple Rain” to call out to their fallen gods one last time in a moment in grief. These two men truly changed the lives of those folks. On a micro level, that change can become something altogether larger when the lonely are grouped by that queerness in a single shout that says “That’s me!” It is not yet certain if Tilda Swinton, Mykki Blanco or anyone else challenging social norms of that level can have that large of an impact, but their work is already speaking volumes at its best. We pass the emerald jewel on in knowing that fact.