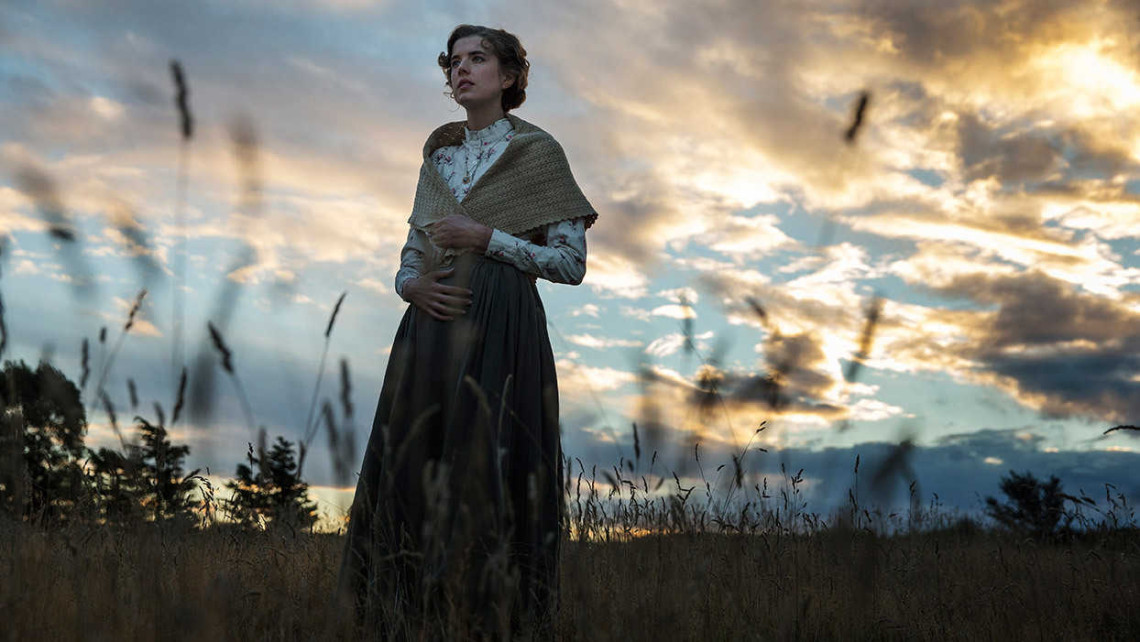 Terence Davies returns once again to the historical-drama well in the decades-spanning coming-of-age saga Sunset Song. But compared to the formal radicalism of earlier cinematic memoirs like Distant Voices, Still Lives (1988) and The Long Day Closes (1992), this latest film from the great British auteur continues more in the classical vein of recent films like The House of Mirth (2000) and The Deep Blue Sea (2011). If this adaptation of Lewis Grassic Gibbon’s 1932 classic of Scottish literature doesn’t always escape a feeling of aesthetic and dramatic conventionality, the film is nevertheless so visually resplendent, beautifully acted, and deeply felt that it achieves a devastating cumulative emotional power nevertheless.

The central figure of Sunset Song is Chris Guthrie (Agyness Deyn), who endures many hardships in her teenage upbringing, chief among them an abusive father (Peter Mullan) and a long-suffering mother who commits suicide after discovering she has become pregnant once again. After her father suddenly dies from complications following a stroke, however, Chris ends up inheriting the family’s farmland and decides to become its owner upon realizing how much she loves the land (thus abandoning her plans to become a teacher elsewhere). She eventually falls in love with a fellow farmer named Ewan (Kevin Guthrie) and marries him; their marriage produces a son, who they also name Ewan. All is blissful in their lives until World War I comes around.

Up until that point, Sunset Song may feel like standard British-kitchen-sink coming-of-age material. After all, despite the difficulties of Chris’s teenage years, there’s nothing inherently fascinating about seeing working-class characters grow up, fall in love, marry, give birth to offspring—in other words, the stuff of everyday life. And yet, the Terence Davies touch can still be felt in the way he turns these universal experiences into intense emotional epiphanies. He isn’t afraid, for instance, to turn Chris and Ewan’s wedding into an extended sequence, allowing us to bask in the heartwarming euphoria of the occasion—the deliverance from all of Chris’s early years of brutal hardship that she has long sought. A long take of Chris singing a song during the wedding may be less formally innovative as, say, the “Tammy” sequence in The Long Day Closes, but it is no less openly joyous in effect.

It is during the film’s last hour, however, that Sunset Song really comes into its own, as Chris’s carefully cultivated farmland paradise comes to a brutal end with the United Kingdom’s entry into World War I. It’s bad enough that Ewan bows under overwhelming societal pressure to enlist, thus leaving Chris to raise their son by herself. Things, however, turn out to be no better when he returns, with Ewan exhibiting a serious case of post-traumatic stress disorder that leads him to become a brutal terror to his family. In other words, Sunset Song transforms into a wartime melodrama—but Davies and his actors embrace it with full-throated conviction, in much the same way they managed to find horror and beauty in the relatively mundane up until that point. The last 15 minutes of Sunset Song manage to be both deeply tragic and profoundly uplifting all at once, with one character committing a final act of selfless sacrifice that is arguably the most heartrending such moment in cinema since a similar act of goodness at the end of James Gray’s The Immigrant.