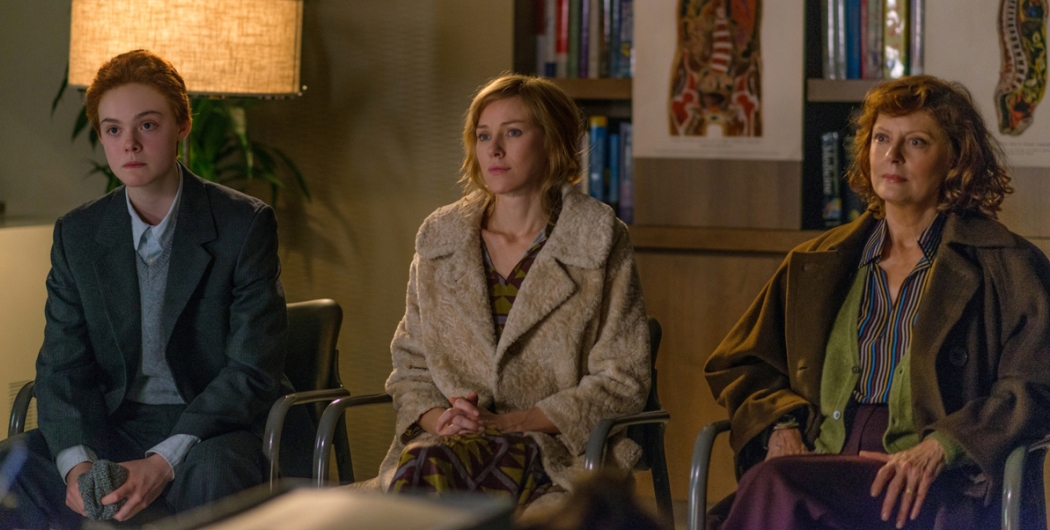 Even though About Ray revolves around a transgender teenager, this isn’t the hot-button topical-issue film one might expect. Certainly, there is very little anguished hand-wringing about transgender issues; among most of the main cast of characters, transgender folk like Ray are already accepted at the outset, with preachy dramatic arcs in which people are forced to renounce their former close-minded ignorance kept to a minimum. Instead, the key word in the film’s title is “about.” Though Ray (Elle Fanning) – a young girl who yearns to transition from female to male – is, to be sure, a major character in the film, he is ultimately more a catalyst for what turns out to be the film’s primary focus: his mother Maggie’s (Naomi Watts) own troubled romantic past.

How does a film about a transgender teenager manage to morph into a conventional romantic melodrama? It all comes about as the result of two signatures that Ray’s gender-dysphoria treatment requires: his mother’s and his father’s. This requires single-mother Maggie to visit her ex-husband Craig (Tate Donovan), to try to convince him to sign the necessary paperwork – but his reluctance to commit opens up a whole emotional can of worms, most of them related to past marital infidelities that she apparently has had trouble accepting for all these years.

This focus on character drama rather than topical commentary is admirable – in theory, at least. Some of the earliest moments in the film offer a genuinely eye-opening look at the details of Ray’s life (case in point: at one point, he feels a need to run across the street from his school in order to use the bathroom, away from the rest of his classmates). Director Gaby Dellal and screenwriter Nikole Beckwith help their cause by adopting a relatively light touch throughout, especially in the form of comic relief offered by Maggie’s mother Dolly (Susan Sarandon) and her wife Frances (Linda Emond). About Ray is resolutely more interested in telling a story about specific characters than transparently pushing a message. If only that story didn’t seem so soapy.

Maggie, it turns out, is something of a psychological mess – so full of hang-ups and self-doubt that, naturally, she dominates the film’s second half by sheer force of neurotic personality. This leaves the character of Ray himself in an odd spot: more or less subordinate in his own frankly more interesting story. Essentially, About Ray ends up committing a similar sin to, say, Cry Freedom, The Last King of Scotland, and other such films that filter black experiences through a white perspective. It’s as if Dellal, Beckwith and the rest of their collaborators were afraid of losing their audience unless Ray’s own gender anxiety eventually became something of a side concern.

This is especially disheartening not only in the year of a film like Sean Baker’s Tangerine, with transgender characters played by actual transgender actors, but also in light of Duncan Tucker’s 2005 road-trip comedy Transamerica, which dared to make a transgender character (albeit one played by a non-transgender actress, Felicity Huffman) the center of a (semi-)mainstream American movie. For all its moments of insight and sensitivity, About Ray suggests just how much progress – even in the era of Caitlyn Jenner – that the United States has yet to make.