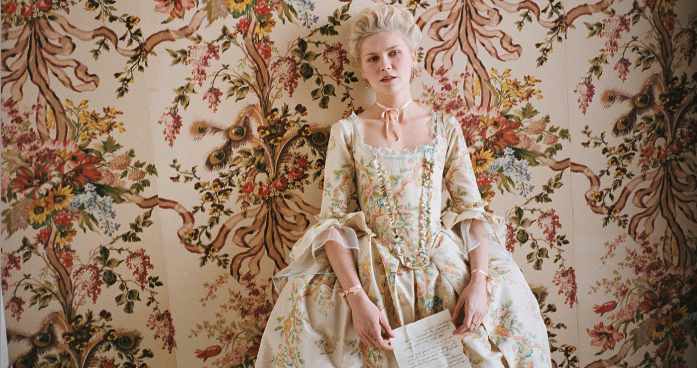 Through the Looking Glass: Marie Antoinette

In preparation for the release of The Bling Ring this week, I decided to rewatch Sofia Coppola’s oeuvre and fill in any gaps within my viewing history. While it is fair to categorize me as a Coppola fanboy, I found myself drawn to a film that is divisive even amongst her most ardent fans. It’s true that Marie Antoinette doesn’t convey the same emotional gut punch as Lost In Translation, and its ideas of existential loneliness and confusion affecting those in the public eye were latter refined in Somewhere. However it’s an achingly beautiful film, seemingly obsessive over the superficial while simultaneously subverting the traditional costume drama troupes. Through Coppola’s lens an apparent parody is rendered very real.

The opening moments of Marie Antoinette encapsulate the entire aesthetic of the film. As the anachronistic tones of “Natural’s Not In It” blare over the pounding black and electric pink title cards, the teenage queen is revealed. Surrounded by lavish cakes and other sumptuous desserts, the thoroughly modern monarch is the epitome of surfaces. The extravagance of Versailles hollow halls mirrors Marie’s own emptiness. Much like the various pop songs that pepper the film, these opening moments would have you believe that Marie doesn’t extend deeper then the dazzling gowns that adorn her. 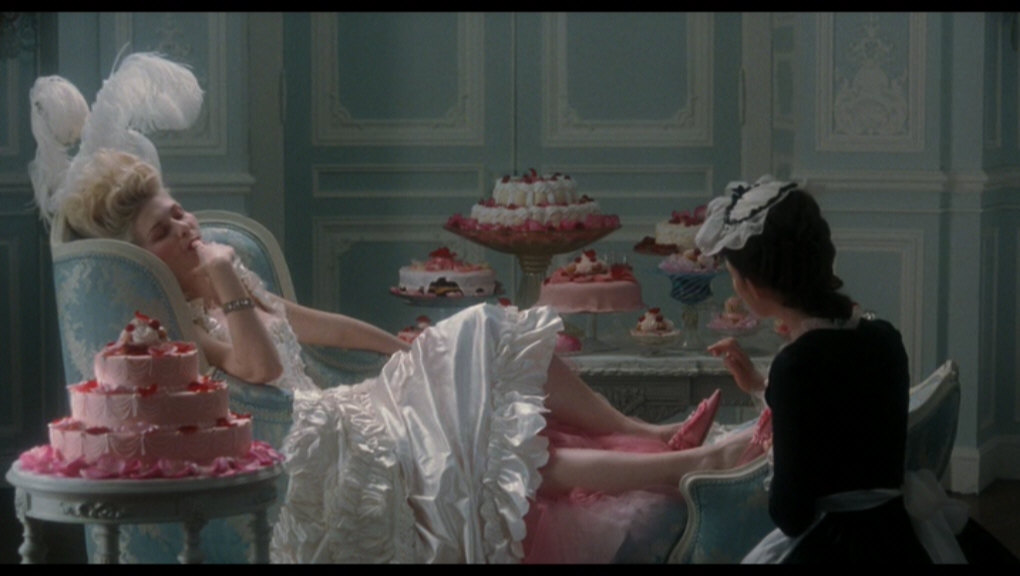 While Coppola certainly loves to bask in the glow of the French royal court’s baroque visuals, she is also very much concerned with the scarred little girl underneath all that ravishing couture. Marie Antoinette is as much of an object as the countless shoes and clothes that surround and glamorize her.  This young girl, only fourteen years old at the time, is essentially handed over to France and commoditized by a volatile and angry nation that needed her but didn’t want her. Reduced to being just another exotic decoration within Versailles, her only option was to embrace her surface and bury her substance deep.

While we first meet Marie Antoinette the object during those first chaotic moments, it’s the stripping of Marie Antoinette the girl in the minutes that follow which prove to be the most illuminating. As the young girl hurtles towards the French-Austrian border, and subsequently to her fate, the last vestiges of her youth and her homeland surround her. The muted palette of the Austrian woods engulfs her carriage, only her two childhood friends and her beloved pug offer her any comfort.

Within these darkened woods a flamboyant blue portal appears to have appeared out of the ether. Marie’s guide, the Comtesse de Noailles informs her that she may not have any Austrian possessions when she crosses the border, that includes her pug and her innocence. She is completely stripped, physically and metaphorically of Austria. These are the last moments of darkness before the dazzling light. Once Marie treads upon French soil, she no longer belongs to herself she, belongs to France. Her consolation is that she can have as many French dogs as she likes. 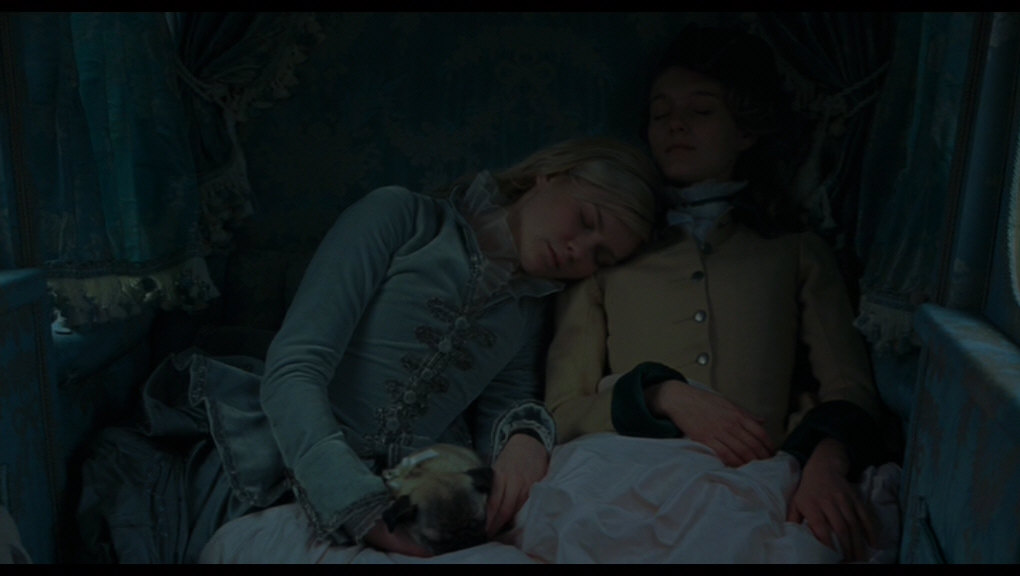 As her final piece of flimsy clothing is removed, her bare ass is exposed. Like Scarlett Johansson before her however, Marie’s behind is not sexualized, instead this baring of pale, quivering flesh effectively displays her last remnants of youth. Yes Marie Antoinette is a child or at least a young adult for most of the film, but in this moment she is still pure, not yet tainted by the garish entitlement and hubris of the French Royals.

Her delicate skin is but the small focal point of the image, the rest of the frame is wholly consumed by crystal chandeliers, golden candles, and servants in flowing gowns. These ornate furnishings are the manifestations of the dizzying, complicated, and essentially ludicrous protocol of the French court that will soon consume Marie.

Her lithe frame is laid bare, not just for us, but also for the numerous women who will be her servants and helpers. This is but the beginning of her Foucauldian nightmare, as her mother informs her before she leaves Austria, “all eyes will be on you.” Once she exits that tent as the Dauphin of France, the eyes of an entire nation fall squarely on her. The palace at Versailles is the most extravagant panopticon prison ever constructed. 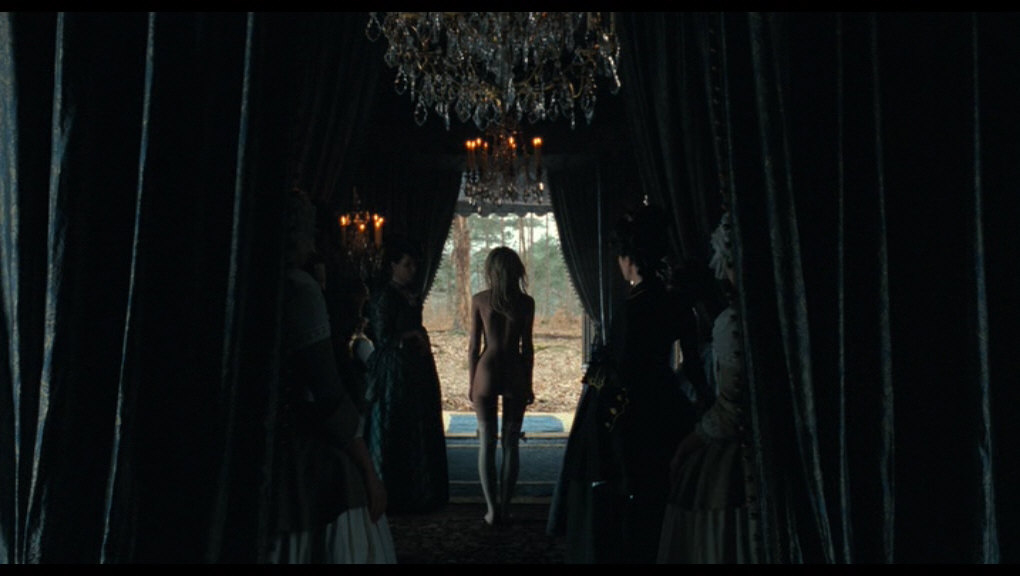 As the various layers of clothing are applied, like a knight putting on his armor before battle, the transformation is complete. Marie Antoinette emerges almost unrecognizable from the young girl who entered on the other side. Draped in blue gowns, a powdered wig, and a generous layer of makeup, she looks like a child playing dress up. These adornments could never hope to conceal the hesitation and fear that creep across her face. Along with every other material object that she will come to possess, they merely serve as a way to seal away her alienation and ennui.

With the sun and Austria at her back, she proceeds forward into the arms of a monarchy that needs her womb, and a nation that doesn’t have much use for her at all. As Marie Antoinette steps out of the private sphere and into the perpetually public space that is the life of royalty, she sacrifices her innocence, doomed to forever be a child in a strange land. Truly, Alice has traveled through the looking glass. 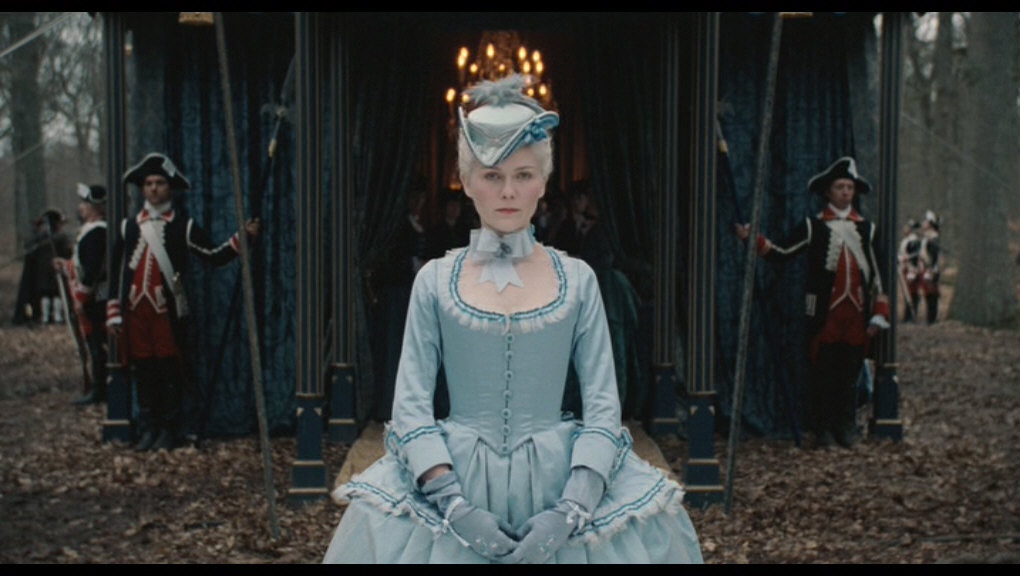