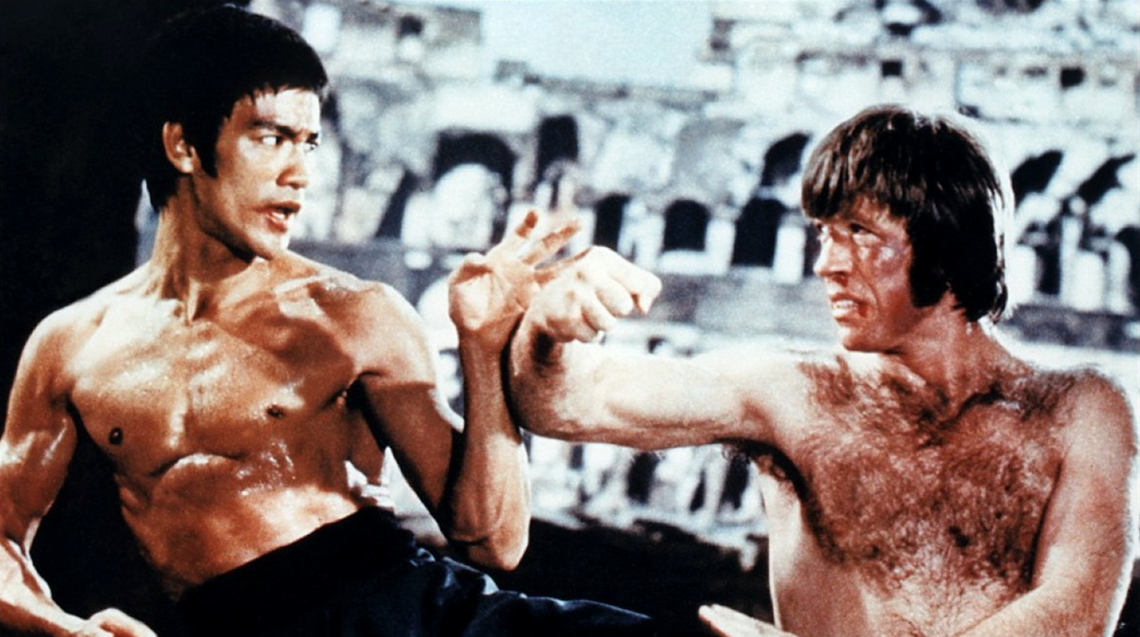 This Week On MUBI: “The Way of the Dragon”

In this week's column, Jake Cole looks at the Bruce Lee film "The Way of the Dragon."

Despite the frequent comparisons of martial-arts movies to musicals, only a few martial-artist filmmakers have truly embodied the quintessential elements of both. Jackie Chan is one; in his best work, he triangulated the link between the forms of cinematic physicality in both genres with a third, vaudeville, and his intricate use of acting and direction to layer in complex visual and performative payoffs is Chaplinesque in its filmmaking control. The other is Bruce Lee, whose intense conditioning was the manifestation of an entire philosophy of martial arts, but one that also finds root in the less spiritual realm of the musical: the capacity of the body to communicate what words cannot. Chan represents the zenith of the form’s entertainment potential, but Lee personifies the purity of mastered technique. Where Chan’s movies have the complications endemic to comedy, Lee’s are almost ludicrously simple: Within minutes, they pare down to essential characters, a basic conflict, and the inevitability of combat.

It’s all the more surprising, then, that his 1972 film The Way of the Dragon could pass for a prototypical Chan film. It begins in a Rome airport with Tang (Lee), dressed in a traditional black tunic, standing among white tourists decked out in acid-wash jeans and wide-collar shirts. Discomfort and confusion emanate from him as he shuffles off to a nearby café, where his eyes nearly bulge out of his skull when he gets one look at the prices. Desperately scanning the menu for something affordable as a waitress stands by, impatient, he settles for several bowls of Campbell’s soup, themselves marked up to a criminal degree. Lee’s usual sense of serenity is nowhere to be found in Tang, and the poor man guzzles down his meal as if he were afraid that the price might be revised upward if he dallies.

Tang has come to Rome at the behest of the uncle of Chen (Nora Miao), a restaurateur who has fallen afoul of a local mob boss (Jon T. Benn). Chen initially cannot understand why her uncle sent her such a dolt, but soon she discovers the kiloton bomb of punches and kicks that has been entrusted to her. From here, the film gets downright silly, pitting Tang against nondescript white guys who have learned just enough karate to put up a mild guard before Bruce Lee’s fists cave in their skulls. Heading up this group of kung-fu cannon fodder is Ho (Paul Wei), the mob boss’s consigliere and a man who dresses like a jockey pimp. With his glittered cap and tacky suits, Ho doesn’t exactly cut a menacing figure compared to the villains of other Lee vehicles, and he helps shade the film’s action as comic more than brutal.

Even Lee’s maneuvers are treated with a slightly lighter touch, as if he were making a film directly for the kinds of audiences who chuckled along to bad dubbing and his high-pitched screech when delivering blows. His facial expressions have never been broader, and his moves, at least at first, are executed with a casual mastery he uncharacteristically plays for mild arrogance and a desire to impress. Lee directed the film, and his clear inexperience results in functional filmmaking that only calls further attention to the odd beats of his on-screen mannerisms. Nonetheless, the film does eventually settle into a classic Lee showcase, especially in a climactic fight against Colt (Chuck Norris, in one of his earliest screen roles), a silent killer who gives Tang good sport. Here Lee is in his natural element, delivering strikes with astonishing speed as the camera rushes to keep up, demonstrating a savagery tempered by an overriding sense of honor. The fight’s conclusion is unexpectedly moving, with its offer of mercy and a show of respect even after it is refused, Tang draping his foe’s gi over his face with reverence and regret.

That sobering moment is complemented by the thematic arc of the story, which begins with a comic fish-out-of-water tale but gradually turns into something more thoughtful. Throughout, the film compares the karate style practiced by the mob and half-learned by the besieged restaurant staff with Tang’s kung fu. When Tang inquires about karate, the restaurant owner dismisses it as “foreign,” complicating the reductive cultural divide between East and West by pointing out the many divisions within the hemispheres. A late twist only doubles down on this confusion, suggesting a conflict layered with overlapping national prides and universal greed. The Way of the Dragon may be one of Lee’s most lightweight classics, but the simmering tensions it explores reveal a plot every bit as focused on Lee’s philosophical inquires as his more ruminative martial-arts films.

If you’re interesting in watching Way of the Dragon on MUBI, use your Movie Mezzanine coupon for an exclusive discount and access to a breathtaking library of cinema! Note: MUBI now offers its streaming service to North American users via a Playstation 4 app. Visit the Playstation Store to download for free.