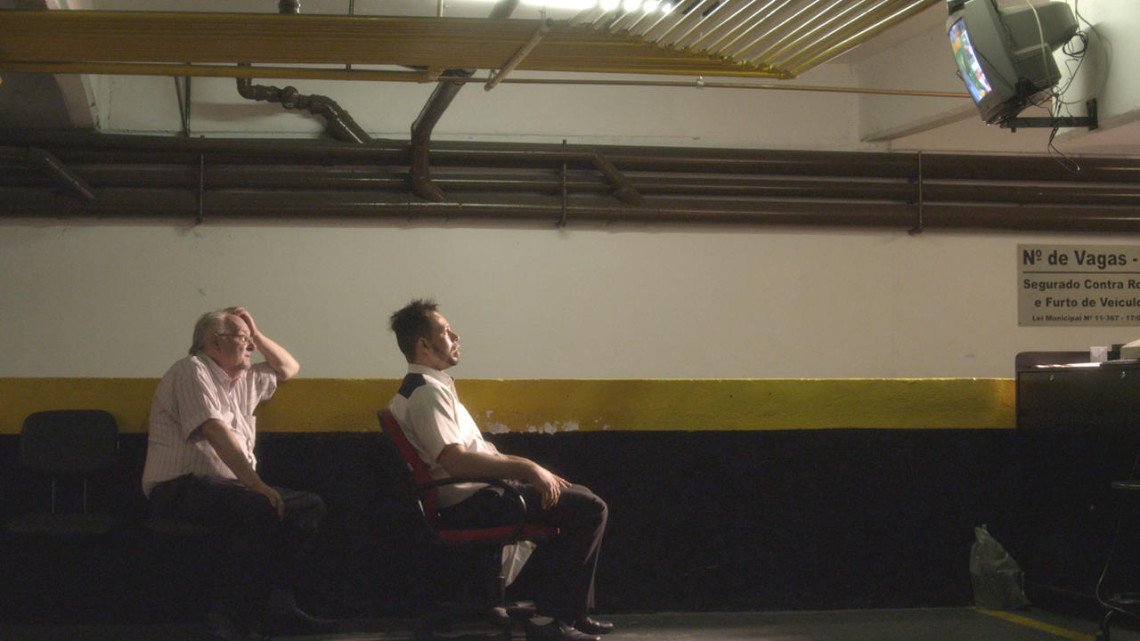 This Week on MUBI: “On Football”

In this week's MUBI column, Jake Cole writes about the recent documentary "On Football."

Sergio Oksman’s On Football is a nonfiction film based around one of the hoariest clichés of sports fiction, that of the power of sports to strengthen personal bonds between those who do not even play them. The Brazilian-born director ties his efforts to reconnect with his absentee father, Simao, to the 2014 World Cup, not only subtly linking the ups and downs of the tournament to the awkward attempts at reconciliation but regularly falling back on a shared enjoyment for football as a means of smoothing over the most uncomfortable moments of friction.

A more traditional documentary might have used the camera as a confrontational tool, placing the director off-screen as he lobbed questions at the parent who abandoned him. But Oksman crucially places himself in the frame with Simao, not as an interrogator but a conversationalist. The men resemble characters instead of subjects, broaching their nervousness around each other in circumspect dialogue instead of a Q&A session. By placing himself into the frame, Oksman becomes Sergio, not the filmmaker but the son, and it keeps his desire for answers humble and personal instead of accusatory.

This aesthetic decision also permits the viewer to study the subtleties of both men’s expressions, especially those of Simao. With wisps of white hair clinging to the top of his head and a basketball paunch of a gut, Simao looks like a harmless old man, utterly ordinary in every way. He certainly does not live up to any image of a deadbeat, nor Sergio’s romanticized childhood notions of what his dad was like. “I imagined you with the voice of a football announcer,” the director says at one point, the timidity in his voice highlighting the absurdity of that inflation when confronted with the banal truth of the man, neither as great nor as vile as expected.

Shots regularly watch Simao while he watches football, and his calm but interested and knowledgeable reactions reveal much of his character. While several pillow shots interrupt the father-son dynamic with street glimpses of Brazilians cheering or moaning in response to matches, Simao watches the Cup with a muted tone that would suggest indifference if he could not rattle off entire team rosters from decades ago or predict with bookie-infuriating certainty how much of the Cup would turn out. Simao comes across like a man who does not rile, does not lose his cool, which only calls further into question what could have possessed him to run away from his family.

Simao’s oddly detached perspective comes to the fore in the film’s most moving scene, in which the man and his son sit down to watch reels of Simao’s wedding to Sergio’s mother. Simao recalls many small details, like the name of the man who drove their wedding car, but he cannot remember important relatives on his ex-wife’s side, and he watches the film with, if anything, even less outward passion than he does football matches. The man’s silence says more than any direct confrontation of his departure, which likely would have produced the same tight-lipped response but would have oriented that reaction around his son’s directness instead of his natural feelings toward his marriage. Later, when he brings up how many years he spent living out of hotels after leaving his family, his confession is less defensive than a complication of the seeming nonchalance he shows toward his past.

Unwilling or unable to approach the topic directly, both father and son constantly dance around their emotional states by finding alternate reasons to vent. Sergio almost regresses to childhood in his desperate attempts to attend a World Cup match with his dad despite all of them being sold out, and in one scene they even drive all the way out to a stadium, only to be reduced to sitting in the car outside of it. The blatantly symbolic moment weighs more heavily on the son than his dad, who occasionally lets his conflicting emotions about being found at all, much less filmed, leak out in his irritable reactions to Sergio’s insistence on talking and seeing football. Though Simao’s life moves at a leisurely pace, he always insists on needing to work whenever his son starts pressing too hard on spending more time together, and without raising his voice, the man clearly imparts a great deal of apprehension over the whole project.

Though the entire World Cup of course took place in Brazil, the film largely builds its arc around the lead-up to Brazil’s disastrous 7-1 loss against Germany. If the inability to get into a match speaks to the communication barriers between the two men, the eventual collapse of the national team, and the street-clearing malaise it engenders, comes to represent even worse changes in fortune. On Football’s format announces from the top that it is not a rigorous search for answers, but it’s remarkable how much is left unsaid by the film’s end. Neither a simple documentary nor a tidy narrative, Oksman’s movie comes across as a true, real-time attempt to connect with someone, and the only thing more upsetting than how many issues go unresolved is the realization that no method could have likely resolved them to the satisfaction of either party.

If you’re interesting in watching On Football on MUBI, use your Movie Mezzanine coupon for an exclusive discount and access to a breathtaking library of cinema!