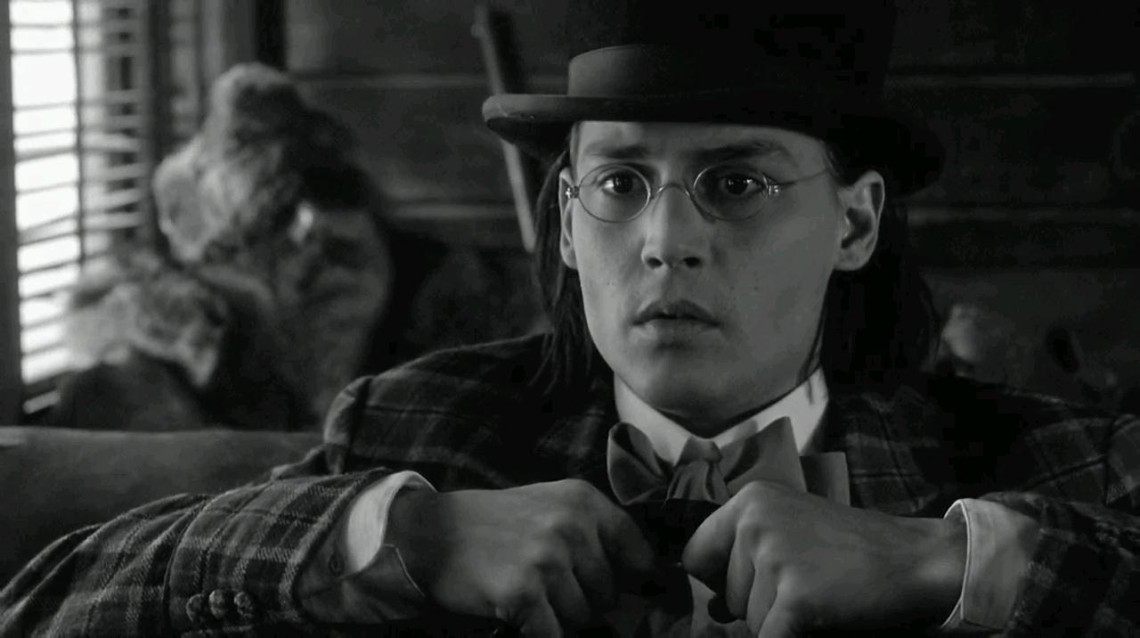 This Week on MUBI: “Dead Man”

This week in our MUBI column, Jake Cole looks at the 1995 Jim Jarmusch neo-Western.

Were the opening of Dead Man a self-contained short film, those few minutes would still stand as one of the great revisionist Westerns. At its best, Jim Jarmusch’s minimal, no-wave filmmaking is poetic in the style of e e cummings: no punctuation, full of sequence gaps, and making the avant-garde oddly palatable by stripping it to the bone. The opening scene of the director’s 1995 acid Western epitomizes these strengths. Heading west for an accounting job, William Blake (Johnny Depp) first sits among refined and moneyed passengers. The further west he gets however, the rougher his carmates become, eventually reduced to coal-caked inquisitors and brutal hunters who kill buffalo by the score from the cabin just for sport. Increasingly, the train seems bound for hell itself.

The subtlety with which Jarmusch tilts the scene off its axis, turning the natural vistas against themselves and making an unchanging set feel like it undergoes a nightmarish transformation, prefigures the rest of the film, which uses pragmatic but dissonant composition to upend a genre. First, Jarmusch subverts the core Western notion of the frontier as being ambiguously situated between epochs, between the freedom of nature and indigenous tribes and the taming of white modernization. When Blake arrives at a company town literally named Machine, he enters a factory that could have come out of Chaplin’s Modern Times, all gigantic gears and shrieking industrial noise. This isn’t a town uncertainly navigating the development of civilization in the wild; it’s a capitalist outpost that simply exploits a lack of regulation to enact brutal manufacturer oligarchy. No sooner does Blake walk in the office than he is told that his promised job was filled weeks ago, a cruel act made for seemingly no other reason than because the owner, John Dickinson (Robert Mitchum), can.

But things truly get weird when Blake gets mixed up with a woman and gets terminally wounded by her jilted ex, prompting a feature-length death hallucination drawn out by an accompanying Native American named Nobody (Gary Farmer). In the greatest revision, Nobody aids the doomed Blake not out of any overriding sense of charity or nobility but a morbid curiosity stemming from his reverence for Blake’s poetic namesake. You could say that Nobody leads Blake on a vision quest, but it is not a journey intended for the white man’s epiphany but the Native American’s own mystical edification. In effect, the Native American uses Blake as his exotic plaything, and his open contempt for and power over the “stupid fucking white man” is startling in its inversion of typical western racial dynamics.

Blake’s prolonged death march is rendered especially strange by the hyper-clear image quality of Robby Muller’s cinematography, which painstakingly captures period-accurate details with a clarity that conflicts with the worn and rough edges of the objects and locations in the frame. Faces pop with extreme detail, stressing Depp’s baby-smooth visage and the deeply wrinkled, worn and scarred flesh of those overtaken by the land he roams as a glorified tourist. Occasionally, the too-gorgeous, too-tactile cinematography brings horror uncomfortably close, especially in the scenes of the bounty hunters dispatched after Blake. Gruesome sights like the crushing of a head under a boot heel as brains seek out from under the leather, or of the last strips of flesh dangling from a freshly roasted human arm, look even more disturbing in crystalline sharpness.

Jarmusch’s West is the last refuge of the freaks. Besides the cannibal bounty hunters, Iggy Pop shows up as a cross-dressing evangelical, and Mitchum’s local robber baron is a terrifying caricature who would fit more easily in a Frank Miller comic than a John Ford picture. When Blake inadvertently kills the man’s son and steals his horse, Dickinson dispatches bounty hunters, but seemingly does so more over the theft than the filicide. These aren’t simply tough types leaving beyond the reach of law and order, the ones who head out into the unknown out of ambition or adventure. These are the people who simply cannot exist in normal society and found themselves scattered to the elements. This is even true of Nobody, who knows enough of white culture to be a pariah among his own people but obviously cannot integrate elsewhere due to the racism of the encroaching white settlers.

Scored to the sick thrum of Neil Young’s atonal guitar, Dead Man is a woozy trip through actual and cinematic history. But despite its oddity, the film is never surreal. It is far too logical for that, presenting concise visualizations of a de-romanticized west that attains the fatalistic clarity that one could connect to a man slowly dying of blood loss and lead poisoning. If Jarmusch is the coolest of directors, this is his most deliberately uncool picture, a nasty thing that paints a portrait of Western colonization so scathing that it tacitly hints that the Eastern Seaboard got “discovered” by people every bit as unsuited to starting a new world. Then again, maybe this film links up to Jarmusch’s work after all: as a depiction of corporate tyrants, figurative and literal cannibals, and feckless freaks settling the West, it could be one New Yorker’s roundabout comment on how a town like Los Angeles ever came to be.

If you’re interesting in watching Dead Man on MUBI, use your Movie Mezzanine coupon for an exclusive discount and access to a breathtaking library of cinema!