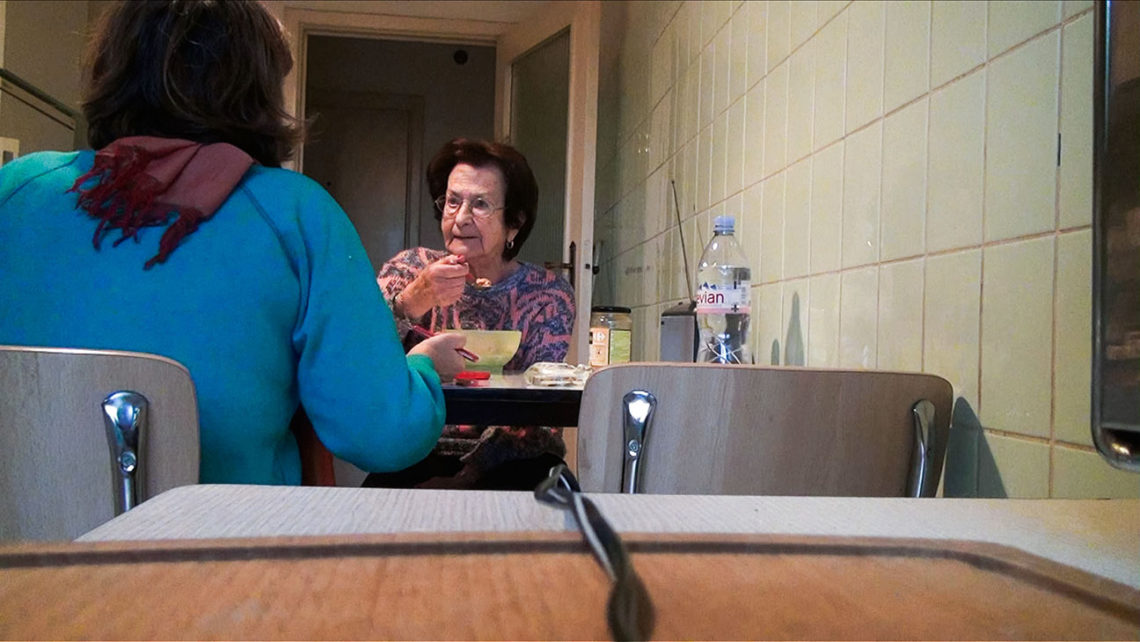 This Week on MUBI: “No Home Movie”

This week, Jake Cole looks at the final film from the late filmmaker Chantal Akerman in our MUBI column.

Chantal Akerman’s final film, No Home Movie, is inseparable from the context of the great director’s death. This would have been the case no matter the film’s subject, but that the documentary is itself so steeped in mortality only exacerbates its unsettling, yet fitting, place in Akerman’s filmography. Its first images are ones of transience: a long, unbroken shot of a tree rattling in the wind of the Israeli countryside, or of a finely manicured, lushly verdant but equally empty backyard. In a park, a shirtless old man sits facing away from the camera as children play in the space between him and the camera, as oblivious (or unconcerned) as the old-timer that they are being watched.

These elegant images, delivered without context, could simply be shots that Akerman collected over time; strung together, they generate a meaning that bridges their vast geographic distance. They create a sense of ephemera, as well as a lulling beauty that is suddenly disrupted by the blocky, heavily processed streaming video of a Skype session. The video call in question is between Akerman and her mother, Natalia, who is confined to her flat for health reasons. A significant portion of the film occurs in these chats, which feature such charming moments as Natalia sitting far, far too close to her computer’s camera, or forcing her traveling daughter to yell so that she can hear, or just simply ending a conversation and not hanging up, leaving her camera on to stream.

Yet embedded within these innocuous checkups between mother and daughter is the occasional acknowledgement of the mother’s frustrated inability to leave her home and her desire to spend time with her child. Several of Akerman’s films, especially her magnum opus, Jeanne Dielman, use domestic spaces to connote the social roles assigned to women. The modest home of Jeanne Dielman felt even more like a prison than the middle-class dwellings of ‘50s “women’s pictures,” where the central figure spent her time confined to the kitchen and the bedroom in metaphoric bondage. Here, however, the subject, the filmmaker’s own mother, is literally restricted to her domicile.Suddenly, metaphor seems a cruel abstraction for a very real sense of entrapment.

In a darkly ironic twist, this confinement is not much different than Natalia’s introverted life before she had to stay in, and she reacts against the knowledge that now her shut-in nature is outwardly imposed instead of inwardly prompted. Natalia’s homebound life can be attributed to her status as a survivor of Auschwitz, and the most direct moments of the film concern Akerman’s attempts to get her mother to talk of her experiences, to hear and record them before it is too late. These are the most heartbreaking moments of the movie, as Natalia, who is so warm and lightly teasing with her daughter when catching up, turns cagey and circumspect. Yet her diversions produce unexpected glimpses into memories that she will divulge, such as talk of growing up with a father who was so progressive that he ironically made his wife punish his daughters because he could not bear to strike them. When Natalia does broach the war, she does so with an inadvertent mastery of storytelling, withholding unwelcome details that makes her monologues all the more gripping.

Though Akerman uses Skype recordings and inexpensive digital cameras to give the film the look of an intimate home movie, her usual formal command is brought to bear on her mother’s apartment. Akerman arranges the mundane so that it takes on abstract properties, like a living room recliner that she films from around a corner, capturing a kind of regression to childhood, of nervously peering around at the seat reserved for a parent. But as the director arranges shots in overlapping planes of clutter, the evocative nature of her compositions begins to matter less than the tacit insinuation that Natalia’s hoarding may be a byproduct of losing everything to the Nazis. Buried even deeper into this realization is the possibility that Akerman, whose interior aesthetics may derive from a childhood in this overstuffed home, built a career out of this inspiration without fully understanding its roots. The director’s digital cameras constantly autofocus to deal with minor variations in light, a technological flaw that in the moment takes on poetic qualities, as if the camera eye were reflecting its wielder’s own moments of epiphany as certain aspects of her upbringing suddenly make sense.

In a career laden with evocatively composed, powerfully sedate images, few stand out with the immediacy of No Home Movie’s final shot. Trained on Natalia’s mantle in the wake of her death, the camera films the apartment looking suddenly bare as efforts are underway to clean out the place. Akerman does not appear on-screen in this shot, but she is heard just behind the camera, sobbing intensely. The image now connotes a double lack, first of Natalia, whose absence precipitates a brightening of her now-uncluttered apartment in a physical sense, but also a terrible emptiness. Second, of course, is Akerman herself, whose suicide in the wake of the film’s completion only compounds the heartbreaking impact of her audible grief. Akerman’s immaculately arranged tableaux have always stood out for their intricate, maximalist interior composition, but here is an image rending for what is outside of the frame. In context, it’s the most haunting final shot in the history of cinema.

If you’re interesting in watching No Home Movie on MUBI, use your Movie Mezzanine coupon for an exclusive discount and access to a breathtaking library of cinema! Note: MUBI now offers its streaming service to North American users via a Playstation 4 app. Visit the Playstation Store to download for free.