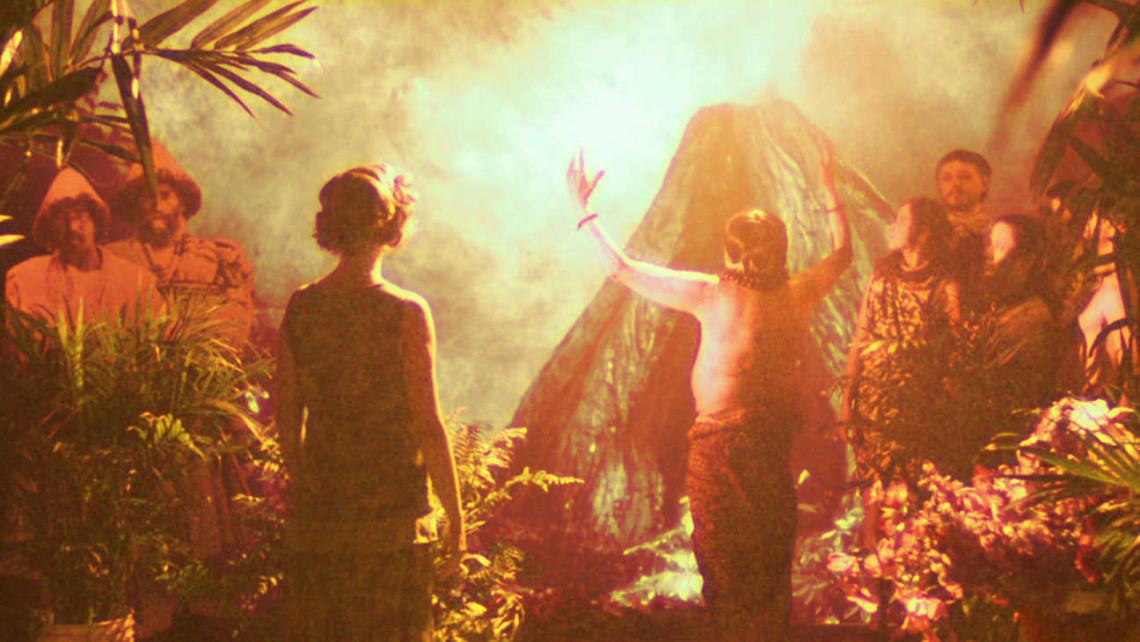 This Week on MUBI: “The Forbidden Room”

Even by Guy Maddin’s standards of loopy experimentation and scatological humor, The Forbidden Room is an outré experience. Though shot digitally, it mimics the spots, lines, and general dilapidation of poorly stored nitrate. Its colors bleed together into moldy purple-greens and rusted brown-red. Frequently, the image ripples and bubbles like film trapped in the projector gate and catching fire. Transitions are frequently literal dissolves, in which one image simply disintegrates to reveal another below it, an aesthetic change-up that matches the freewheeling nature of the free-form narrative and its constant shifts between fragments of different stories.

This is Maddin’s fever-dream cinephilia taken to its most extreme reaches, and with co-director Evan Johnston, the Canadian filmmaker completely abandons anything approaching narrative cohesion in favor of pure form. More than any of Maddin’s other features, this feels like one of his shorts blown up to theatrical length, and the tendrils of overlapping yet disjunctive tales contained within play like a history of cinema pieced together from public domain archives. It opens, for example, with an instructive film on bathing, one of those dry, educational postwar movies filtered through ‘70s sleaze. It is presided over by Marv (Louis Negin), an old letch with his bathrobe hanging open like torn blinds, revealing a solid gut tanned so deep that it seems to turn the entire frame burnt umber. And as he describes the mechanics of bathing, he does so with a voice split evenly between informative deadpan and hungry lust, as if he did all his own research for this documentary.

From there, the film abruptly moves into a submarine thriller involving a crew running out of oxygen but unable to surface less the change in pressure set off some unstable explosives onboard, which is itself interrupted by a lumberjack who abruptly appears in the ship as the camera follows him back into his forest home as he finds himself waging war against feral tribes for his stolen love interest. These stories all have, in the most purely reductive terms, basic elements of movie storytelling: romance, adventure, suspense, sex, etc. But the oddity of each segment gives lie to the notion that this is just nostalgia, as even though the directors drew inspiration from the AFI’s summaries of lost films, what they produce out of those briefs is so unlike anything else that their inherently retro feel collides with the knowledge that at no point in history were movies made like this.

Eventually, any pretense to constructing a false past collapses in favor of the sheer delight in watching everything mix into one heterogenous stew, the binding element of which is increasingly demented sexual urges. Udo Kier stars in the film’s definitive segment as a lusty man who gets a lobotomy in an attempt to cure his fixation on rears; as he undergoes the operation, we get to experience his last, frenzied burst of horniness in the form of a cabaret music video entitled “The Final Derriere,” which, in its blend of small-club bounce and grinding metal, could have been something David Lynch thought up while looking at a Sears catalogue. As Geraldine Chaplin whips poor Udo and interspersed footage of bloody surgeon hands not so much operating and digging into gobs of meat, the sexual energies of the sequence explode in Freudian delight.

The strangest thing about the movies is that if you watch it long enough, it begins to make sense. A sequence involving Mathieu Amalric as a spineless husband who orchestrated a theft of his own possessions in an attempt to stir his bored wife to passion ironically becomes more logical the crazier it gets, revealing itself as a typical story of escalating screw-ups as the fool gets in over his head. This sequence and others like it work so well as self-contained stories that The Forbidden Room may actually be Maddin’s most accessible feature to date. The incessant visual and narrative immolation and reconstruction has a purifying effect, allowing Maddin to go as crazy as possible because he can reset a few minutes later. No scene gets too weird for its own good because it one stops before it can go too far off the rails. The film may gain an audience for its sheer bizarre invention, but the depth of its cleverness may well get those who stumble across it to dig further into Maddin’s filmography to see what else this goofball genius can do.

If you’re interesting in watching The Forbidden Room on MUBI, use your Movie Mezzanine coupon for an exclusive discount and access to a breathtaking library of cinema!