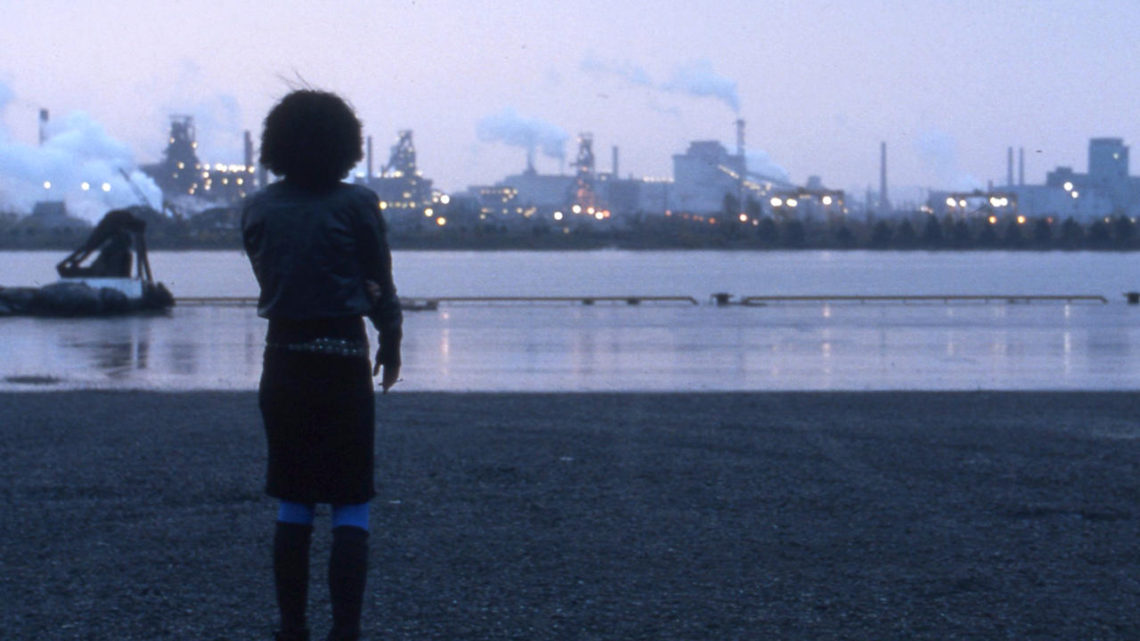 This Week on MUBI: “Clean”

Chemical poison is everywhere in Clean, whether it’s the drugs that its characters consume and attempt to kick, or even the industrial fog that fills the screen in numerous pillow shots of factories. The opening of the film, in fact, could pass for Blade Runner by way of Ozu, unfolding in static compositions of overlapping power lines buffeted with shots of smokestacks belching so much mist that everything in the area is rendered hazy. These shots share little narrative connection to the film, but they epitomize a general sense of filth that pervades an otherwise character-driven story.

In 2004, Olivier Assayas was still primarily known for his eclectic, referential post-New Wave movies that drew from music, cinema and youthful rebellion and anomie. Clean represents a transition into the filmmaker’s mature stage; its protagonist, Emily (Maggie Cheung), is introduced as the wife of musician Lee (Nick Cave and the Bad Seeds bassist James Johnson), whose glory days have long past and left only drug addiction and the mounting desperation of a middle-aged musician attempting to keep going in such a youth-oriented field. Even the young band Metric, whom the pair go to see in a small venue, seem to be more put together than their older peers, and frontwoman Emily Haines comments on their self-destructiveness. Everyone around the couple blames Emily for Lee’s addiction, something that prefigures the fallout of the musician fatally overdosing that night.

These early scenes are shot with relatively sedate but nonetheless twitchy handheld cameras reflective of the strung-out state of their characters. When Emily is arrested at the scene of Lee’s death for possession and sentenced to six months in prison, the camerawork becomes more formal and mounted. For the rest of the film, shots with Emily are tinged in the pale blue-white of hospital corridors, presenting an aesthetically clean finish to match her attempts at recovery. But this kind of clean is antiseptic, chemically scrubbed and antibacterial, and Emily’s own struggle to detox is aided by methadone, which simply replaces one addiction with another. Even in recovery, Emily relies on a dealer, who himself succumbs to an overdose of her “cure.”

The cold, reserved cinematography synchronizes with the muted performances of the actors. If detached acting in Assayas’ earlier films reflecting youthful ennui, here, the actors are weighed down by experience. Cheung’s performance is bleached of histrionics, leaving only her drained attempts to rebuild. Even throwaway images of her working in a family restaurant in Paris are overwhelming in her desperate grab for normalcy. Emily speaks softly, averts her gaze, and works to maintain the flat level of her voice, better that than to scream. Cheung eschews giveaway tics like tremors and instead channels all her energy into making a dull, functional life into a Herculean task. Just to work a job seems difficult, because for someone who has drifted so long, it is.

Cheung isn’t the only actor who walks this fine line of dispassion and great effort. Nick Nolte gives one of his finest performances as Albrecht, Lee’s father. We meet Albrecht when Emily gets out of prison and find that he has taken care of many of the financial problems Emily left behind. Nolte’s natural rasp, that deep gurgle that sounds like air worming its way through a rockslide, is naturally intimidating, but it also has a defeated quality that the actor brings to the foreground here. Nolte plays Albrecht as a man without rage, a grieving father who has decided to respond to trauma with forgiveness. There is no tension in his interactions with Emily, because he knows her shame needs no catalyst and nothing can be gained from adding to it. Albrecht’s kindness is devastating in its own way, and when he asks Emily to leave her son Jay with him and his wife for a few years to let him process the complexity of his trauma, it is heartbreaking precisely because there is no malice in it. He doesn’t threaten legal action or promise a fight; he just cares about the child’s well-being, and that is a position Emily cannot possibly challenge.

Clean is the logical conclusion of the fast, empty living its predecessors showcase. It stares directly into a reality that is scary in its commonality. Overdose may be a crucial part of the story, but the film primarily follows the daily efforts to overcome addiction. These kinds of stories are typically filmed with one eye on relapse, as much for the aesthetic variation as the dramatic upheaval. Assayas films with a patience that belies his post-punk foundation, and the care he affords to the small indications of Emily’s successes and setbacks prefigures wonderfully minor later achievements like Clouds of Sils Maria and Summer Hours. So graceful is the direction that even small flourishes feel larger than they are, like a shot of Emily, having fled from Albrecht, running back after him when she changes her mind, only to ascend the stairs headed in one direction as her father-in-law walks off another way, just missing her as the camera captures both in the same shot. But after a heartbreaking moment of confusion, Emily spots Albrecht and the two reconnect. That scene summarizes the emotional arc of the film nicely: Assayas is less interested in wallowing in near-misses for their tragic possibility than he is in the hope of reconciliation.

If you’re interesting in watching Clean on MUBI, use your Movie Mezzanine coupon for an exclusive discount and access to a breathtaking library of cinema!