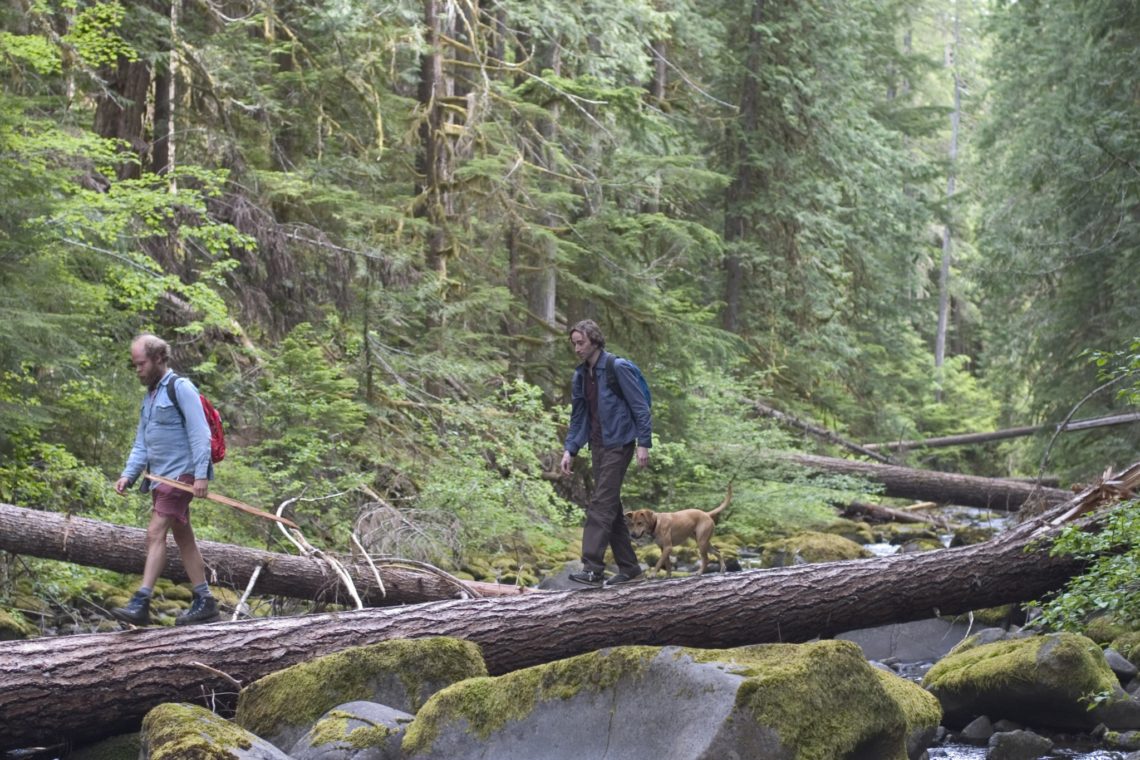 This Week on MUBI: “Old Joy”

In this week's MUBI column, Jake Cole looks at the 2006 film from Kelly Reichardt about a dissolved friendship, "Old Joy."

It’s hard not to think that Kelly Reichardt had the rotten luck to be born a decade too late. Her movies, at once restlessly peripatetic and listlessly static, seem to belong to the slacker culture of the ‘90s more than the fast-paced confusion of the 21st century. That most of her work is set in the Pacific Northwest only compounds the temporal dissonance of watching her movies. Yet there is an immediate relevance to all of her films, explicitly so with 2006’s Old Joy, which interrupts its early moments of awkward silence with Air America broadcasts in which callers animatedly discuss first the legacy of the Johnson administration’s push for civil rights legislation, then the current political divide of the Bush era.

Rather than linger on these radio excerpts for their own political significance, however, Reichardt flips the usual thematic script and uses the broadcasts to comment on the film’s narrative core, the lapsed friendship between expectant father Mark (Daniel London) and directionless stoner Kurt (Will Oldham). The most crucial difference between the widening schism among the political parties and the distance growing between friends, besides the obvious imbalance in scale, is that one can at least offer concrete reasons for the rift between Republicans and Democrats. There is no such easy explanation for Mark and Kurt, no definitive moment à la the Southern Strategy to chart where it all went wrong for them.

Reichardt and cinematographer Peter Sillen sharply visualize the friends’ mutual alienation through shot distances and mood: early compositions of Mark at home with his wife are heavy on intimate close-ups, but we see Mark and Kurt only in long shots. But when the two share the same frames, they do not feel joined in any way, and the space between the two is the focal point of all of their moments together. The two embark on one of their old trips out to the countryside, and it is obvious from the start that this will be their last trek, only more so when Kurt gets them lost, much to Mark’s barely contained anger.

Kurt wishes to escape the noise of city life; the soundtrack in early scenes is indeed boosted to highlight the roar of appliances and gardening equipment and vehicles. Yet when the two finally make camp, they do so in a small clearing filled with junk, which leads Kurt to lament of the shrinking gap between cities and the country. (Hey, at least something is growing closer together in this movie.) Around a fire, the long shots turn into isolating close-ups that hone in on Kurt’s nervous attempts to address how far apart they’ve become, then Mark’s blasé, half-hearted reassurances, said in flat tones designed only to provide perfunctory pleasantries. Not that one can entirely blame Mark’s coldness; Kurt reacts with naked shock at Mark’s excitement over becoming a dad, even making an unintentionally callous statement when he says, “I never got myself into anything I couldn’t get myself out of,” as if the child were a horrible mistake. Meanwhile, he rhapsodizes a grand unified theory of physics he idly imagined while attending some night courses.

Attuned to the subtle, tacit demonstrations of discomfort between the two men, Old Joy is one of the best films ever made about the natural dissolution of a friendship. If the city grinds with noise, the forest where the two men camp is deafening in its near-silence. Here, the chirps of birdsong and the buzzing of insects are notably prominent in the soundtrack, as a reminder of how little the men have to say to fill the air. In the long patches of awkwardness, one can catch a glimpse of the naturalistic acting that uses every minute shift in body language to communicate discomfort. Mark is rigid, perhaps under the impression that his friend’s eyesight is based on movement and that if he just keeps still when Kurt extemporizes on random topics, he can slip into effective invisibility. Kurt, meanwhile, trembles with the desire to talk about things openly with Mark, to be able to fix whatever went wrong with them to get his friend back and, perhaps, to catalyze a general improvement of the rest of his life.

The final minutes of the film are among the most moving in contemporary American cinema. A nature bath shared by the men leads to an extended monologue from Kurt in which he lays out a half-story, half-dream that clearly exposes his deep sadness without explicitly referencing it, and the two friends share a strange but tender moment that suggests an ending, whether happy or not. The coda, in which Kurt, dropped back to his miserable life, initially rebuffs a homeless man before he pauses and hands over some cash in what looks like a desperate deposit into a karmic bank, is troubling instead of uplifting, closing things out on a multilayered note of ambiguity that has become Reichardt’s biggest trademark. Some may say she doesn’t know how to end a movie, but this abrupt, un-reconciled conclusion is masterful in showing what goes unsaid.

If you’re interesting in watching Old Joy, use your Movie Mezzanine coupon for an exclusive discount and access to a breathtaking library of cinema! Note: MUBI now offers its streaming service to North American users via a Playstation 4 app. Visit the Playstation Store to download for free.