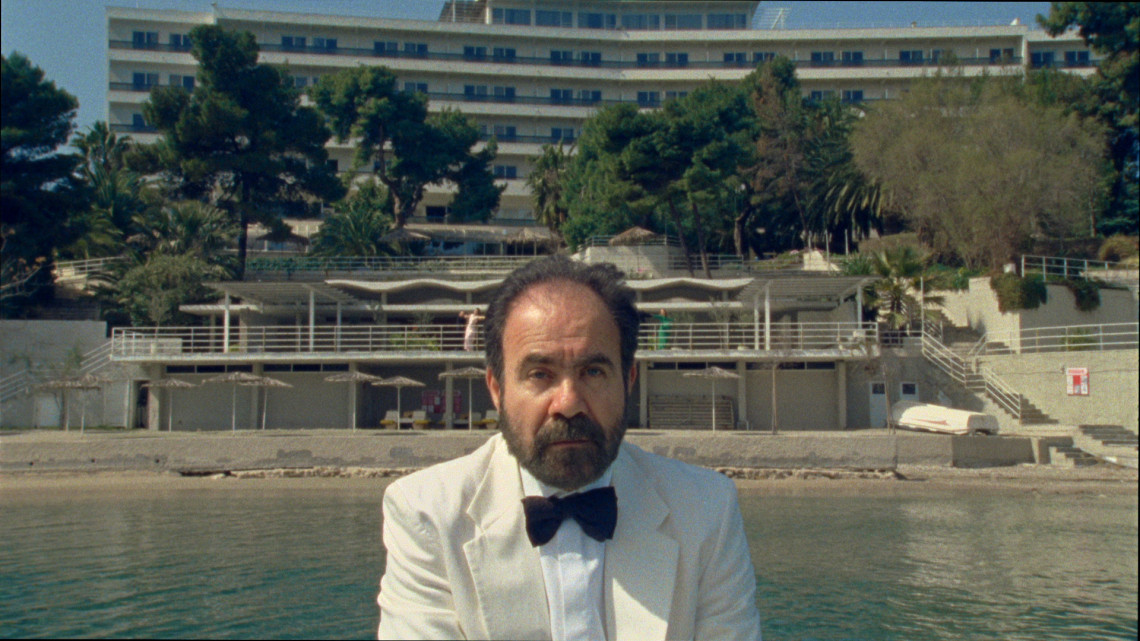 This Week on MUBI: “The Eternal Return of Antonis Paraskevas”

In this week's column, Jake Cole looks at a recent Greek satire.

Elina Psikou’s feature debut, The Eternal Return of Antonis Paraskevas, opens on the highway, trailing a mysterious SUV as it heads deeper and deeper into the countryside. At one point, the vehicle stops and the driver lets a man out of the back, suggesting a captive. But that notion is quickly dispelled by the easygoing body language between the two men, who do not speak to each other but betray a sense of comfort and camaraderie. Sure enough, the passenger, TV host Antonis Paraskevas (Christos Stergioglou), is faking his own kidnapping, hiding himself away in an abandoned hotel in the hopes that his failing morning news show will get a ratings spike and that any ransom he can finagle could pay off his sizeable debts.

The early section of the film consists primarily of formally composed static shots that create mildly comic effects from their blocking and juxtaposition. An early shot of Antonis and his “abductor” pissing against a wall places the men absurdly far apart, so self-consciously removed from the other’s eyesight that an entire, wide-branching tree fits between them in the frame. At the hotel, Psikou drily observes Antonis going about middling routines of washing clothes, setting one of the dining room’s tables for himself, using the bathroom, and so on. In an amusing recurring gag, he watches a video of a French chef teaching molecular gastronomy, instructing the creation of some wild, gelatinous spaghetti noodle, only for the image to cut to Antonis setting down to a plate of boxed capellini with a blot of ketchup on top.

The director’s minute attention to detail regularly makes for these comic moments. In fits of vanity, Antonis watches his morning show react to his disappearance, which plays clips of the host’s long tenure. In one scene, Antonis flips from the channel broadcasting these tapes of his show, filled with his stodgy, old-fashioned grasps at entertainment and his dull recitation of news, over to the nature documentary Walking with Dinosaurs in an obvious but wry bit of symbolism. The formal details are so direct that one can even track Antonis slowly going crazy in isolation as the camera starts to move more and more.

In faking his own abduction to get attention back to his show, Antonis could be Rupert Pupkin decades after The King of Comedy, resorting to desperate measures to remain even a minor celebrity. But as Antonis watches old tapes of himself hosting a New Year’s celebration that also commemorates Greece’s adoption of the Euro, he comes to represent something far larger, the old Greece shoved out of the way by a new, globalized sense of faddishness. That Antonis mutes footage of his young co-host turning his program into a much more active, accessible format with lots of movement and music only confirms that Antonis can never hope to regain his former stardom in a world that views him as a has-been.

As the frame continues to destabilize, so does the host, who struggles to cope when all the gossip mags he acquires no longer show his name as one of the news items. Interactions real and imagined begin to increase, especially when Antonis shaves his head to go out unrecognized, slowly realizing that most would likely not recognize him even if he looked as he always did. Here, the film slowly starts to morph into a demented psychological thriller, but it still works best as a sardonic comment on celebrity and its deleterious importance in a country facing massive problems. If Antonis is meant to represent the old way, the fact that he himself was a fatuous celebrity does not speak well of conditions prior to the country’s turn to even more vapid distraction.

As a filmmaker, Psikou is remarkably assured but still a bit green. The blatantly representative shots, like Antonis listlessly paddle-boating in circles in the stagnant rainwater collected in an empty pool and bumping against the sides, are just funny enough to offset the obviousness of their conception. A hallucinatory music-video interlude that sounds a bit like John Grant crossed with Italian disco feels too much like an outtake from a Paolo Sorrentino film. Nonetheless, The Eternal Return of Antonis Paraskevas is a mostly focused satire that marks the promising emergence of yet another member of Greece’s idiosyncratic new-new wave.

If you’re interesting in watching The Eternal Return of Antonis Paraskevas on MUBI, use your Movie Mezzanine coupon for an exclusive discount and access to a breathtaking library of cinema!