The Travels of Alexander Payne

Citizen Ruth, Alexander Payne’s first film, is not what you would call a laugh-out-loud comedy, but there is one moment that always gets me. Towards the end of the film, Ruth (Laura Dern), a pregnant junkie who has become the center of a political firestorm between pro-choice and pro-life zealots, is boarding a helicopter that will take her to the local abortion clinic. A crowd of pro-lifers has gathered in front of her yard, and her mother is among them. She grabs a megaphone and starts imploring her daughter to keep her baby. Ruth recognizes her mother’s voice and gets off the helicopter. Her mother asks her, “What if I had aborted you?” Ruth grabs a megaphone of her own and shouts: “Well, at least I wouldn’t have had to suck your boyfriend’s cock!” She turns and gets on the helicopter.

In this scene, you can see the themes that would go on to define Payne’s career (family, politics, and travel), as well as the juxtaposition of tones (slapstick comedy and genuine pathos) that have become his trademark. Still, although the hallmarks of his oeuvre have not changed, he hasn’t remained stagnant either. Over the years, his films have trended away from satire and towards more character-driven work, and in his latest film, he strikes perhaps his most natural balance yet.

Payne’s first two films – Citizen Ruth and Election – were firmly entrenched in the political satire genre. While Ruth skewered the abortion wars, Election was an allegory for our dysfunctional political system set in an Omaha high school. The Tom Perotta book on which the film was based was inspired by the 1992 presidential election, and it is easy to see the parallels. Tracy Flick (Reese Witherspoon) and Paul Metzler (Chris Klein) both represent types we know all too well from politics, but it is the addition of Tammy (Jessica Campbell), a truth-telling outcast, that changes things. Similar to how Ross Perot’s candidacy drastically changed the dynamics in 1992, Tammy recognizes the false choice that the voters have, and her candidacy causes the old political guard to panic.

For Payne’s next film, he began a journey across America that took over a decade. About Schmidt found his character leaving Nebraska for Colorado, where he planned to stop his daughter’s (Hope Davis) wedding to a trashy waterbed salesman (Dermot Mulroney). Two years later, he released Sideways, probably his funniest and most highly-regarded film to date. The characters played by Paul Giamatti and Thomas Haden Church are not technically family; they are freshman year roommates who have stayed friends mostly because neither seems to have anyone else. But their dynamic feels fraternal. If these two met today, they would have nothing in common, but they are kind of stuck with each other. 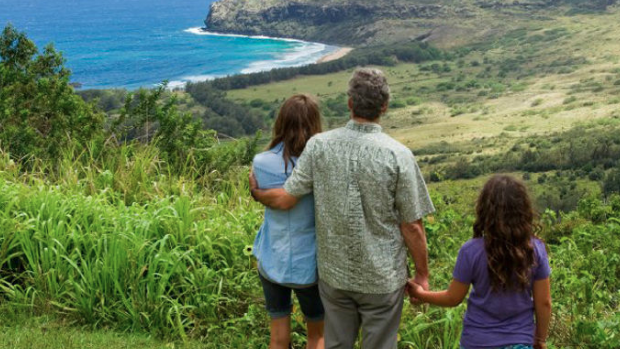 Lastly, there was 2011’s The Descendants, in which Matt King (George Clooney) must learn to accept his wife’s infidelity (while she lays in a coma after a boating accident) and decide whether or not to sell his family’s land to a developer who will destroy its lush, tropical environment and built a resort. In each of these films, the lead characters struggle with and ultimately accept the family members who have caused them so much grief, but the political commentary that defined his earlier films is starting to creep back in. Some viewed King’s dilemma in The Descendants as an allegory for modern-day environmentalistism. Indeed, in wrestling with his responsibility to his relatives and the land, he comes to see the Hawaiian wilderness as “something we were supposed to protect.” One commentator suggested that the filmmaker wanted us “to think about [our] own role as descendants, as inheritors of the earth.”

His newest film, Nebraska, is certainly character-driven, but again, Payne finds a way to make his personal story reflective of our national one. One scene jumps out at me – although many might understandably view it as a throw-away at first. Woody (Bruce Dern) and his son David (Will Forte) take a break from their road trip to Lincoln to stop at Mount Rushmore. David is trying to have a real American moment, but Woody won’t play along. Squinting up at it, Woody is not impressed, noting that it looks “unfinished.”

Such an adjective could be used to describe Woody himself or his hometown of Hawthorne, where he soon arrives. Payne has often been criticized for making fun of small-town folks; there is some of that in Nebraska, but I see it mostly as a loving and sympathetic portrait of a town that has been left behind. Woody’s sister-in-law sourly notes that the economy has been hard on her family, and the behavior of the townsfolk – which run from jealous to jubilant when they learn Woody may have won a million dollars in a sweepstakes.

These people have no money of their own, and, having been ignored by our economy and financial system, they never will. But the very notion of one of their own becoming a millionaire perks them all right up. Some of them invent long-held debts that Woody owes them and now must pay off. Others rejoice that one of their own has escaped their class. I suspect some of this is personal for Payne, who left Nebraska to go off to Hollywood and, like his lead character, has now returned a richer man. Like most great artists, his relationship to his childhood home is complicated and ambivalent, but it’s the ways that his home stands in for ours that make Payne’s work truly special.

It’s hard to imagine what’s next for Payne. After having undergone such an extensive emotional and physical journey over the course of his filmmaking career, he has come full circle, bringing his character work and his political satire to Nebraska. Is this the peak of his career or a step towards even richer, more incisive work? One thing we can be certain of is that he won’t stay in one place for very long.

Nebraska expands into more cities across the country beginning this Friday. Be sure to read our positive review of the film. Leave your thoughts in the comment section below.