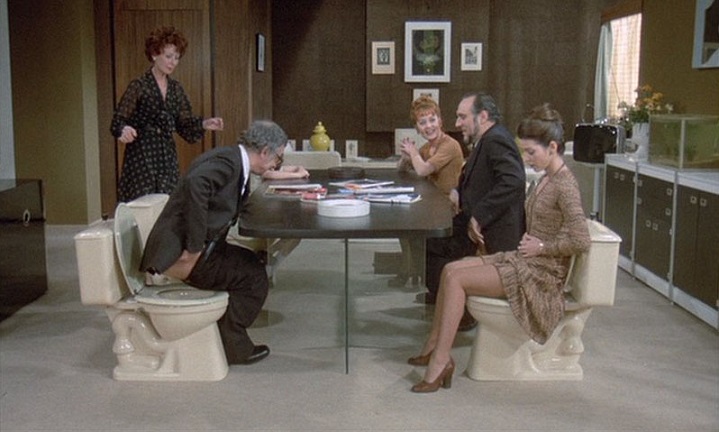 The Second Criterion: “The Phantom of Liberty”

If any single movie in the history of cinema could be described, honestly and without a trace of sarcasm, as “critic-proof”, it might be The Phantom of Liberty. Then again, maybe not; consider the source. The film hails from Luis Buñuel, the man most film students know best for slicing open Simone Mareuil’s eyeball in the 1929 short film, Un Chien Andalou, a master and pioneer of surrealist narrative. That The Phantom of Liberty refuses to play by any but the most basic rules of craftsmanship, then, should come as no surprise. Frankly, seeing Buñuel try his hand at something basic or mundane would offer greater shock value.

But The Phantom of Liberty is anything other than ordinary, going to such extremes of inexplicable weirdness that mining any sort of central meaning out of it feels like a fool’s errand. At an hour and forty minutes of running time, the film poo-poos traditional notions of narrative, jettisoning an overarching plot in favor of rampant eccentricity; it’s a plotless, shapeless picture in which French architecture holds the same grotesque power as pornography, people dine in private to maintain propriety but defecate in public, and where the perpetrator of a shooting spree receives a celebrity’s welcome after being convicted.

None of these things are at all like the others, and yet Buñuel strings them together with the zeal of intent. He’s in his comfort zone here, working well within the same wheelhouse as The Milky Way and The Discrete Charm of the Bourgeois, which pre-date The Phantom of Liberty; the film opened in 1974, while the others made their respective debuts in 1969 and 1972. Here, as in both of those efforts, Buñuel shifts eras and characters with mercurial alacrity, beginning in Toledo during Napoleon’s reign and ending in contemporary (70s contemporary, that is) Paris, swapping principals one after the other in a never-ending, alternating chain of protagonists. Keeping track of the film’s ebbs and flows is an exhaustive task unto itself.

So how does The Phantom of Liberty come together to make a semblance of sense? That’s a question only the individual can answer. What you get out of The Phantom of Liberty depends on what you put into it, a statement that’s true for every movie, but perhaps even more essential to making the most out of this one. Buñuel refuses to be fettered by convention, and never for a moment gives his audience the satisfaction of hand-holding. Put simply, The Phantom of Liberty exists, deploying oddity after oddity without a breath in between each of its vignettes to play catch-up. The task of keeping up with his madness is one placed squarely on the viewer.

And those who do will be rewarded with a delightfully gonzo, often perverse, steadfastly unapologetic ribbing of the social norms it skewers in scene after scene. If there must be a binding force that unites all of The Phantom of Liberty‘s seemingly disparate elements together (and, well, there must), then let it be Buñuel’s deranged brand of cultural satire; though the micro-narratives through which he renders his cavalcade of farce may have all been chosen by Buñuel himself at random (there’s a sense that he simply threw ideas, collected from both his and co-writer Jean-Claude Carrière’s dreams, against the wall like wet pasta to see what stuck), they’re stitched together by a shared love for taking the mickey out of the upper class. 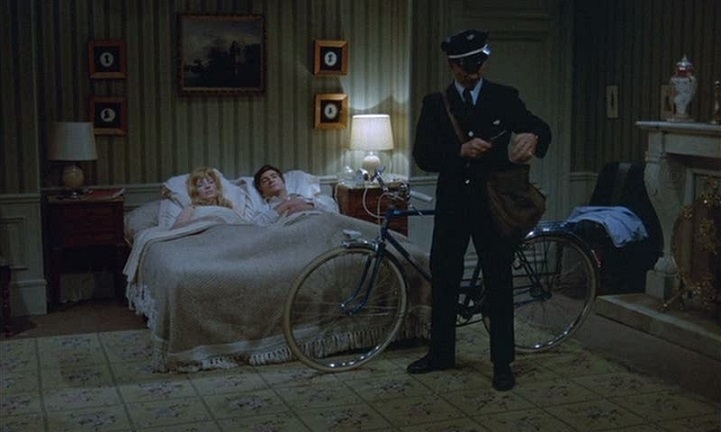 That Buñuel selects a minor player in each sequence, and allows them to transition into the next in a sort-of relay race across The Phantom of Liberty‘s frames, almost feels unimportant next to his higher ambitions. (It’s a commonly-applied but impossibly accurate metaphor for the film’s forward momentum.) The body of Doña Elvira, whose immaculate remains are exhumed by a company of French soldiers, marks the first runner; she goes on to serve as the subject of narration in the next sketch, read aloud by a pair of nannies minding two girls in a park. One of the girls takes the figurative baton, running home to her parents and passing it on to her father, who then visits his doctor to discuss bizarre bedroom occurrences that keep him up at night, und so weiter und so fort.

Yet the cast’s hundred yard dash is itself a necessity to Buñuel’s parody. Everybody here represents a specific social background, from middle class to the bourgeois Buñuel so loves to tease in his filmography, and thus extends the reach of The Phantom of Liberty‘s spoof; the film taunts all measures of authority, from religious leaders to law enforcement, from health care professionals to educators, and even to the military. Now that’s how you spread a central message of mockery – by bringing equal opportunity. Practically no category of humanity is spared in Buñuel’s sweeping, boundary-pushing comedy of the absurd.

Note that even now, this piece hasn’t really answered the most pressing question anyone may ask as they walk out of the film: what’s it all about? Responding bluntly — interpretation hinges on personal investment — isn’t especially satisfying, but the truth is that what makes The Phantom of Liberty such a tough egg to crack from a critical standpoint lies in ambiguity. There’s no one right or wrong way to dissect Buñuel’s film (his second to last before his death in 1983), only your way, a personal take that’s validated by human experience. No matter how ridiculous The Phantom of Liberty gets, it is, at its heart, an intrinsically human film; it’s about snipers, dominatrices, necrophilia, emus, and jealous statues, but it’s also about how life’s little intersections connect all human beings, whether we realize it or not.

Fate, chance, and coincidence are the three pillars used to prop up discussions surrounding The Phantom of Liberty in contemporary and scholarly contexts. Perhaps saddling the film with concepts of meaning misses the point — there’s nothing liberating about being shoe-horned into a handful of pat analyses, and while it’s possible to arrive at very specific conclusions regarding The Phantom of Liberty‘s substance, maintaining a rigid, narrow definition of the film’s essence misses the point entirely.