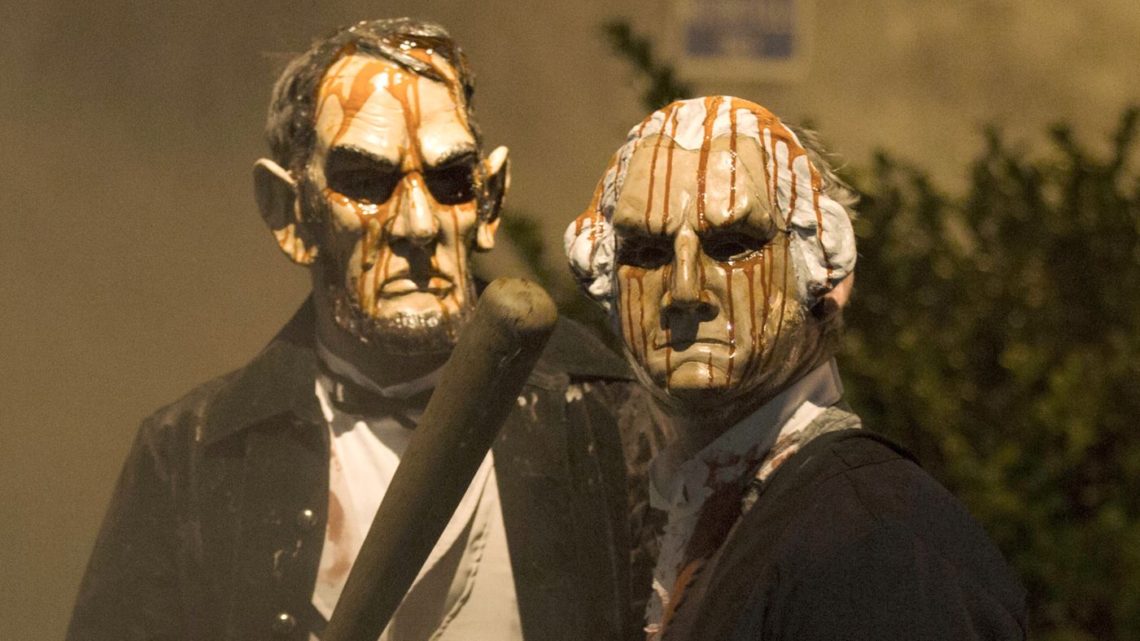 How “The Purge” Learned To Stop Worrying And Love The Violence

Andrew Johnson explores the trajectory of the "Purge" trilogy and its relationship to real and fictional violence.

Written and directed by James DeMonaco, the Purge series revolves around a simple yet provocative conceit: A political party called the New Founding Fathers of America (NFFA) has risen to power and implemented “The Purge,” an annual event in which all crime is legal for 12 hours. This state-sanctioned murder is presented as a way to lower crime for the rest of the year, but detractors argue that it systematically targets the poor and protects the top one percent. The latest entry in the franchise, The Purge: Election Year, follows Charlene Roan (Elizabeth Mitchell), a senator campaigning for president on the platform of abolishing the Purge.

The marketing strategy for The Purge: Election Year smartly exploited the film’s release in an actual election year, channeling the rhetoric of Republican nominee Donald Trump in a series of faux campaign ads tagged with the slogan “Keep America Great.” But more so than previous Purge films, Election Year wants to have its cake and eat it too, glamorizing the violence it claims to critique. Perhaps that’s appropriate. During an election season in which a political candidate can win a major party nomination by condoning the slaughter of terrorists’ children, appeasing white supremacist groups, and calling for systematic discrimination of an entire religious group, Election Year might not be the Purge film we need, but it’s the Purge film we deserve.

Without calling out specific real-life candidates, Election Year makes several nods to the current political climate. One is the inclusion of “murder tourists,” tourists visiting the United States to participate in the Purge—a clever reference to the argument that American gun laws can be exploited by extremists. But DeMonaco subverts expectations: these terrorists hail from Scandinavia and Africa rather than the Middle East. The script also acknowledges the complexity of the immigration debate with a scene featuring two people rescued from the clutches of these dangerous foreigners by a hard-working Mexican immigrant. Almost all of the main characters are people of color, and one major story beat involves a resistance movement that embodies elements of Occupy, Black Lives Matter, and the Black Panther Party.

The thematic underpinning of the Purge films is what theologian Walter Wink coined “the myth of redemptive violence:” the idea that bloodshed is not only natural, but righteous. Wink argued this assumption is the underlying cultural value of human history, from ancient Babylonian creation myths to modern Saturday morning cartoons. The Purge films imagine what would happen if this subtextual belief became literal legal text, and the violence inherent in our socio-political institutions was not reluctantly excused, but passionately celebrated. 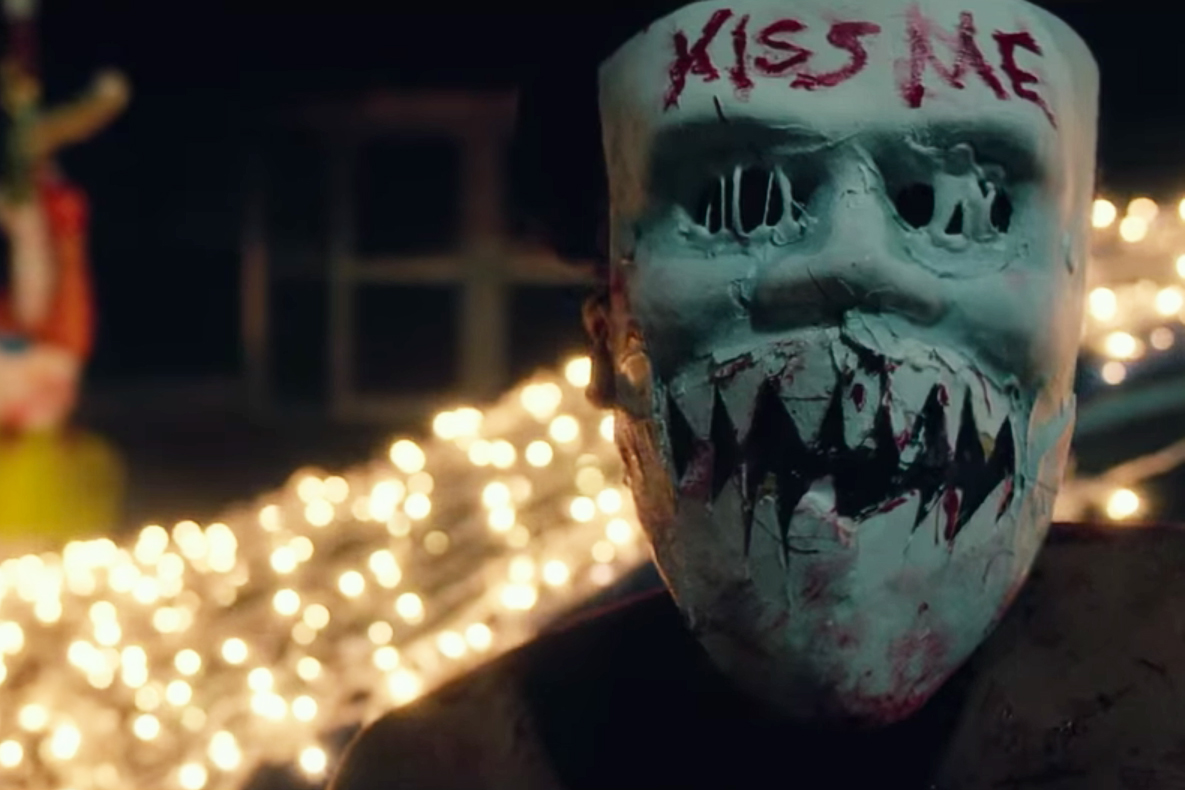 Unlike most genre fare, the Purge films don’t have a specific character as a true villain; instead, it’s a belief system, or even human nature itself (or belief systems about human nature). DeMonaco may or may not be familiar with the work of Wink, but he seems to recognize that our American concepts of “liberty” and “freedom” are historically rooted in violence that is perceived as morally just. His characters speak in Aristotelian and religious vocabulary that would not be out of place in a Wink essay: it’s not murder, it’s “cleansing,” not violence, but cathartic “release.”

Election Year is most successful when it explicitly tackles Wink’s notion that the myth of redemptive violence is “the religion of the status quo” and that all religions “exist to legitimate power and privilege.” The script grapples with how traditional “Christian values” can subtly endorse murder as a means of salvation. (Frank Grillo has stated that the original title of the film was The Purge: Redemption, which feels far more appropriate.) The climactic showdown takes place in a cathedral, as a few dozen NFFA leaders and a corrupt priest named Harmon James (a pun on “harming James,” a leader of the early Church) prepare to sacrifice innocent civilians as an act of spiritual cleansing. DeMonaco takes the lingo of evangelical Christianity (those who Purge are said to be “born again”) and turns it on its head, using mankind’s sinful nature as moral justification. Roan’s opponent, NFFA candidate Minister Owens (Kyle Secor), reminds his congregation that they are “people of flesh, immensely flawed” before encouraging them to “sin, scour, sterilize, and sanitize [their] souls” through murder. In the worldview of the Purge films, violence is not antithetical to Christian dogma but a logical extension of it.

The first two films in the Purge series are remarkably self-aware, acknowledging that our cultural acceptance of violence is also perpetuated through the aesthetics of mass entertainment. The Purge, in particular, seems intentionally crafted to subvert audience expectations. More morality play than thriller, the story is confined to a single house, and the only contact characters have with the outside world is through electronic screens. Moviegoers, like the characters, are both distanced from, and unknowing participants in, the systemic violence of the Purge. For example, one moment of meta-commentary finds a young boy using a portable video camera to explore a room of surveillance monitors: the audience views the outside world through a computer screen, captured by a camera viewfinder, seen by a fictional character, projected on a theatre screen. The majority of the violence is relegated to the last 15 minutes, and it’s presented visually in ways that are just as likely to frustrate as they are to entertain, with heavy shadows that obscure most of the bloodshed and choppy quick-cuts that communicate chaos rather than a visceral thrill—incoherency in service of theme. When one character loudly proclaims, “No more killing!” it feels aesthetically supported.

The sequel,The Purge: Anarchy, is a pulpy, angry lament against America’s epidemic of gun violence. The protagonist Leo’s (Frank Gillo) victory comes not by violently killing someone, but through an act of mercy. Once again, the script and mise-en-scene suggest that real-life violence and our fictional narratives about violence stem from the same thing, and the climactic action scene implicates the audience as no different from a group of privileged socialites who gleefully witness carnage from behind a screen. 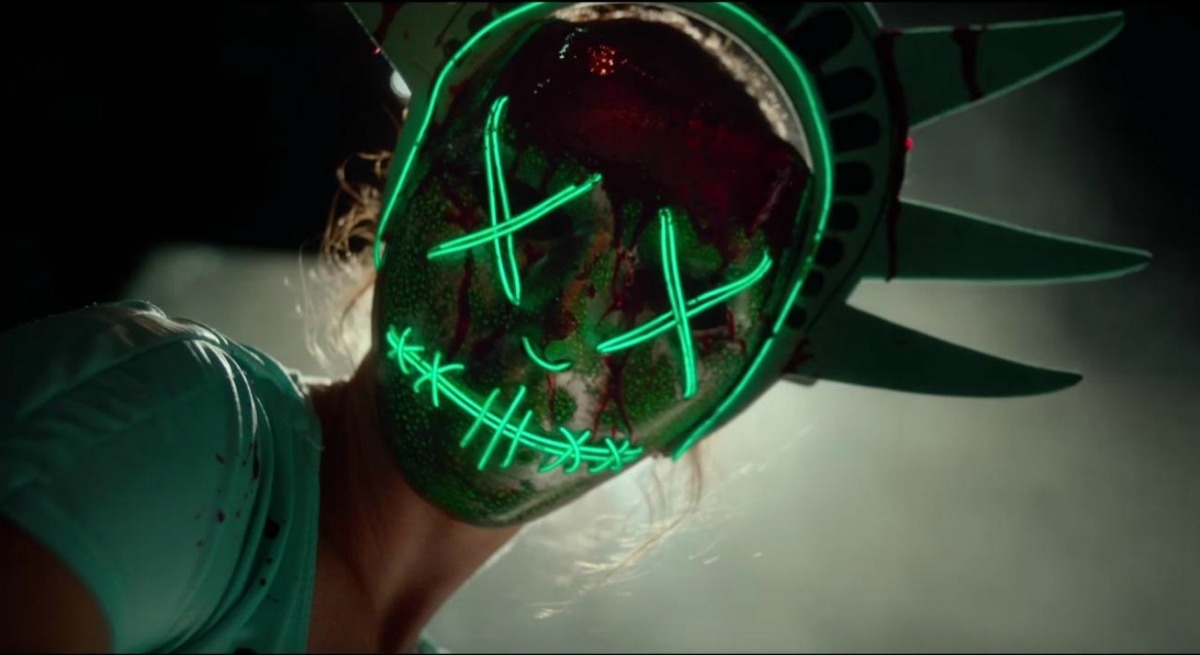 Election Year, in contrast, is an act of aesthetic hypocrisy, with cinematography and editing designed to thrill rather than critique. The camera lingers on titillating images—blood-soaked and scantily-clad teenagers dancing in slow motion (a perverse exaggeration of ‘90s fears of “superpredators”), a back-alley guillotine, corpses sprawled on the steps of the Lincoln Memorial—in a way that indulges the audience’s own bloodlust. Nearly every action beat places our heroes in mortal peril, only to rescue them at the last moment in a triumphant hail of bullets. For the first time in the series, DeMonaco stops questioning the use of violence even in self-defense and embraces the notion that the only thing that can stop a bad guy with a gun is a good guy with a gun.

In doing so, he undermines the moral arc of his characters. The script explicitly makes a point of letting the audience know that almost all of the main characters have morally dubious pasts, but that they’ve changed for the better: Leo almost used the Purge as an excuse to satisfy a personal vendetta in The Purge: Anarchy. Others, like Joe (Mykelti Williamson), a deli shop owner, and Laney (Betty Gabriel), an EMT, are reformed gang members, while Joe’s assistant Marcos (Joseph Julian Soria) did whatever he needed to survive in Juarez. It isn’t long, though, before they return to their violent ways. The most disturbing moment finds Laney gunning down a group of high school students and reclaiming her old gang title, proclaiming, “La Pequena Muerte is back!” Once again, the myth of redemptive violence is endorsed, and the radical quasi-pacifism of the previous two films is replaced by crowd-pleasing bloodsport.

As a result, the moral worldview of the Purge series mirrors the decline of the society it depicts. While the first film argues that killing is never justified, even against those who wish to kill you, the sequel suggests that it’s acceptable to use violence when coming to the aid of others. Election Year takes this allowance to its logical extreme, inventing scenario after scenario in which the violence of the “good guys” is presented as a righteous tool of justice against the oppressive violence of the “bad guys.” Rather than critique the myth of redemptive violence, it promotes viewers’ bloodlust, heightening the tension only to release it through gunfire and savagery. How fitting, then, that the final action scene cuts between Leo fighting a neo-Nazi mercenary to the death and Minister Owens experiencing a fit of spiritual hysteria, ecstatically babbling in tongues. His congregation might be defeated, but the real churchgoers are still out there, sitting in the dark, on the edge of their seats, joining him in the communal Purge.