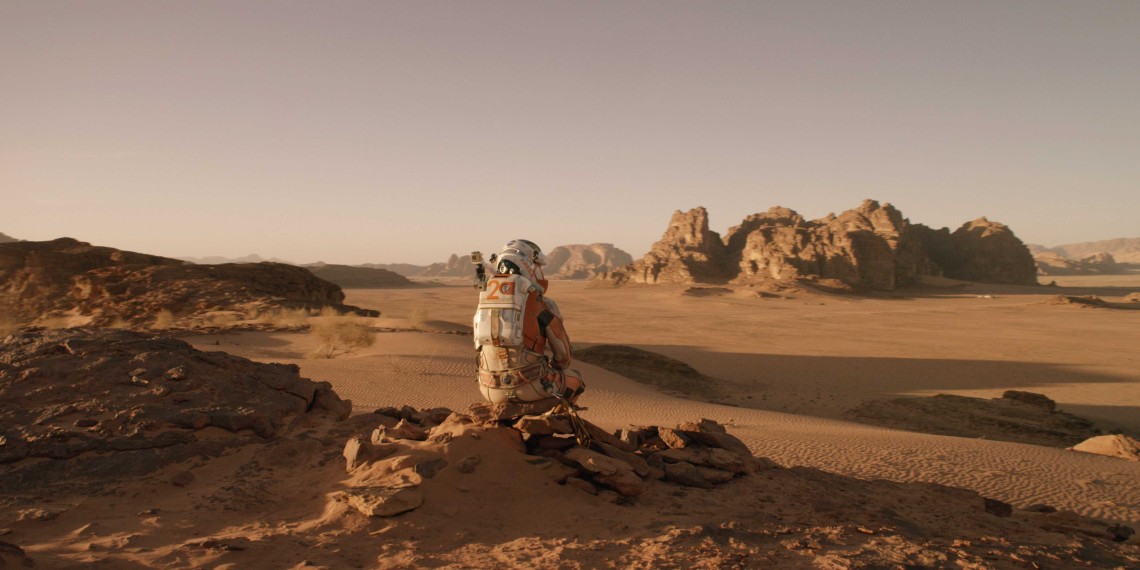 Science can save us. Even if you’re an astronaut left behind for dead on Mars, it’s possible to “science the shit” out of staying alive. That’s the thesis behind Ridley Scott’s latest sci-fi blockbuster, based on the best-selling, scientifically accurate novel by Andy Weir and adapted for the screen by Drew Goddard. Mark Watney (Matt Damon) is a botanist-astronaut who has to science his way into living on the inhospitable planet until NASA sends another Mars mission (years away). He engineers some brilliant schemes to create basic survival supplies, like water and manure soil to grow potatoes. When Earth finds out he’s alive, the space agency invests its energy and money on saving Watney as well as their own reputation through a PR strategy carefully orchestrated by its most senior management, played by Jeff Daniels, Kristen Wiig, and Chiwetel Ejiofor. The whole world wants Mark Watney to live.

The Martian is a genuinely thrilling story, and it hinges on Watney overcoming the real practical challenges of living on Mars. That the movie is able to make these technical aspects of science-troubleshooting this fun to watch onscreen is certainly some sort of feat. Watney’s efforts for survival become difficult to sustain over time, given the precarious nature of his predicament and the few supplies he must rely on. The emotional conflict in the story arises when NASA chooses to put off telling Watney’s crew (headed by Jessica Chastain) about Watney’s survival until they absolutely have to. This motivates the in-space-transit team to help in the eleventh hour when NASA’s Plans A and B have failed, and they pull off some last-minute science superheroics involving complex astrodynamics (thought up by a savant scientist played by Donald Glover) and astro-acrobatics (think Gravity, but more goofy looking).

Every small victory for Watney is punctuated by his self-righteous sense of humour, but his constant same-sounding proclamations of being both super smart and a smart-ass must, at some point, grow tiresome (it’s also a disappointment given that Goddard’s quirky sense of humor is here reduced to the blandest of Hollywood raillery). A gag about Chastain’s character’s love for disco music, for example, and it being seemingly the only music left behind for Watney to listen to, also becomes overused and silly.

The Martian has bigger, thornier problems than its humor, however, all pertaining to deeper ideological concerns that should be better addressed in a longer, non-festival review. Suffice to say, the notion that science can solve everything, as presented in the film and book, should be an unfashionable sentiment in this cynical day and age. The growing, unavoidable issues of climate change and our inability to “fix” our own planet should give every pro-science person pause. Every problem is solvable, says Watney, and he lives to tell the tale to his students at the end of the film. Yet we are also human, and being the self-destructive force that we are, we can’t necessarily get our shit together in time to actually solve everything. That’s something the film never acknowledges even once, because it’s too interested in using science as its ultimate hero. The Martian may have accurately portrayed the technical aspects of space travel, but its depiction of the interpersonal and political underpinnings of how science is used is the stuff of pure fiction. Ridley Scott’s latest may be the most fantastical film he’s ever made.

One thought on “TIFF Review: “The Martian””