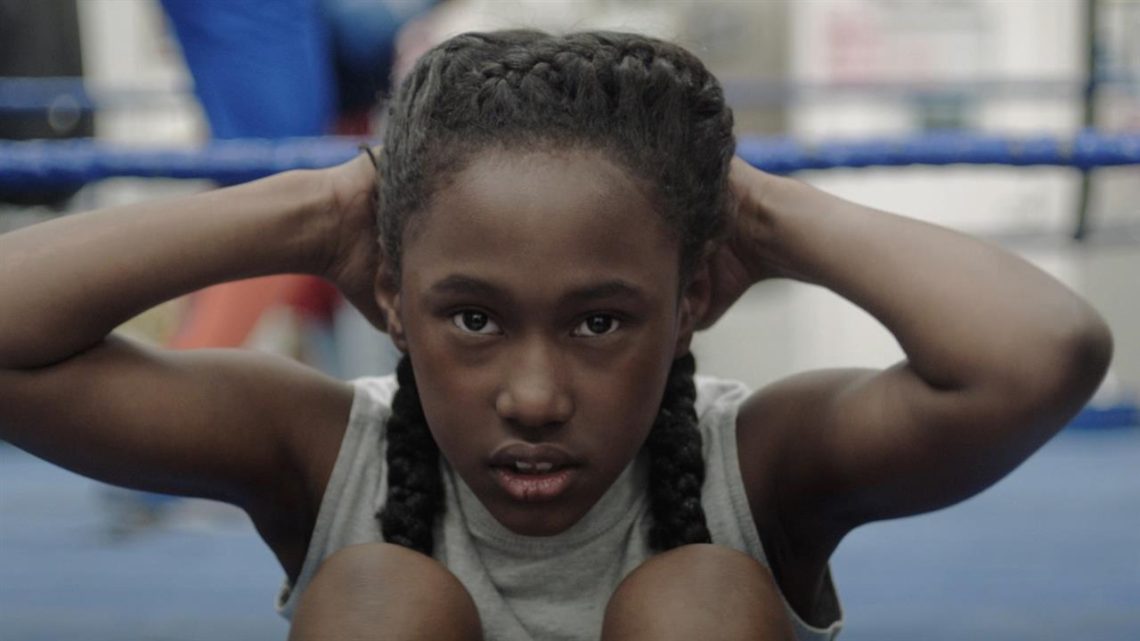 Boxing, Femininity, and Hysteria: On “The Fits”

Christina M. Newland writes on the themes and feminism of the new film "The Fits."

Dancing and boxing, two key forces of early cinema, are joined together in Anna Rose Holmer’s The Fits—a lean, gentle, independent film with a deceptively simple premise. An adolescent girl is lured from her brother’s boxing gym to join an inner-city dance troupe. There, a series of teenage girls fall victim to a mysterious case of “fits.” Whether the causes are supernatural, psychosomatic or otherwise is left up for debate. Holmer’s film is preoccupied by physical motion without ever truly being about it. Both fighting and dancing are intrinsically camera-ready activities—they share a requirement for strength, timing, grace, and coordination. Perhaps so too does growing up.

The central protagonist is Toni (Royalty Hightower), a solemn girl of about twelve with two long braids and an inquisitive gaze. Her friend nicknames her Guns after the upper arms she’s developed while training in a boxing gym with her older brother. The well-used gym full of sparring teenage boys is located in an urban recreation center, where most of the film takes place. Down the hall, a girls’ dance troupe called The Lionesses tenaciously practice its routines. The groups peek in at each other occasionally, but the gender divide is nearly absolute—except when Toni crosses it.

Toni yearns to join The Lionesses, who wear gold-sequined uniforms and earrings and date boys. Her skills are sort of paltry, but it’s as much about social inclusion as it is passion. Toni soon pierces her own ears, and her signature hardheaded-ness looks a tiny bit more feminine.  Not long after she joins, the two captains of the troupe collapse—bodies bent, limbs askew, panic in their eyes. Both girls are hospitalised, sending everyone into disarray. A poisoned water supply is the suspected culprit, but there are no concrete answers, and the girls continue to mysteriously pass out. The boys are unaffected. “Maybe it’s some kind of boyfriend disease,” one of the girls ponders.

Adolescent female hysteria is not new to the movies. Directors of all kinds have tackled the subject: Peter Weir with Picnic at Hanging Rock, Don Siegel with The Beguiled, and most recently, Carol Morley with The Falling. But The Fits is a hybrid piece with its own curious internal rhythm. It eschews anything clearly “witchy” or genre-oriented. Holmer’s film has a plain naturalism, and punctuates it in a startling way. While girls stretch and chatter in the foreground, another girl in the background chokes and cascades toward the floor. It hardly ever forsakes its realism; instead it is pregnant with a strange, unusual sort of energy.

The recreational center where the young girls and boys practice is a world unto itself; the only other notable screen location is an overpass where the stairs are used for running. The rec center is its own teeming little community, where young people do laundry, sweep up, and generally look after their own spaces. Parents and guardians are inconsequential to the action here; we see remarkably little of them. This is an oasis of adolescence, and what happens here exists within its own rules of logic.

Soon everyone is abuzz about the strange hysterics. “Mine was terrifying,” says one girl. “Have you got it yet?” asks another. This is a pretty blatant echo of a conversation nearly all schoolgirls have at this age. A first-ever period is a rite of passage—scary and a little bit unpleasant. But everyone wants to be a part of the club, and latecomers tend to be impatient. It’s thrilling to announce to the others that it’s arrived; no one wants to be left out.

The girls only achieve symmetry when nearly everyone has had a fit—including Toni, who finally succumbs, or maybe pretends to. As she does, a montage appears of the girls dancing in sync, uniformed and joyous. You have to learn the movements, the motions, the details of femininity—a practiced ritual, perhaps not unlike a dance. Toni has studied hard. She perfects the routine, the fit, that marks her transition into womanhood. The faintest of smiles cross her lips as her head jerks back toward the floor. With a dance both graceful and terrible, she’s outdone them all.