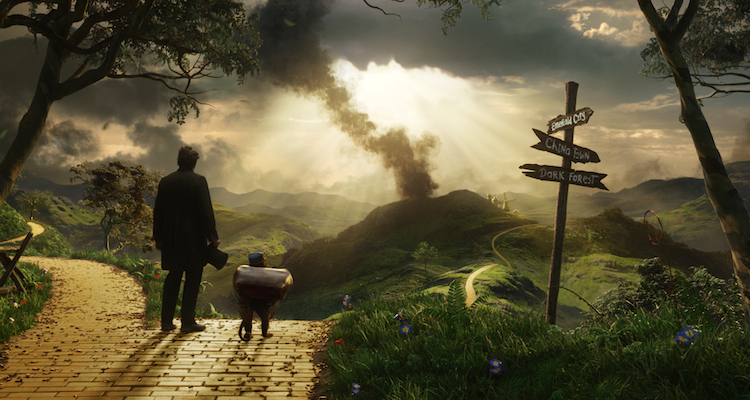 The Epic-ification of the Hollywood Blockbuster

There was once a time when the physical barriers to world-creation on screen dictated a level of narrative justification for an epic scope. Were we to pinpoint the new age of “epic-ification,” we might place it somewhere in the post-Lord of the Rings/Star Wars prequels area. It was then, after audience expectations for visual effects were permanently altered, that Hollywood started to lose its grip on the relationship between narrative necessity and epic scope. Now that anything could be put on the screen, everything should, and in as massive a scale as possible.

The trend toward epic-ification is something I had felt for a while, but which I first noticed consciously as I sat through Sam Raimi’s mildly amusing but mostly awful Oz the Great and Powerful. Obviously it’s unfair to compare any new take on L. Frank Baum’s stories to the classic MGM film, The Wizard of Oz, even when the new film plays as a more-or-less direct prequel. That film was the kind of lightning-in-a-bottle that just doesn’t strike twice. It’s a cultural landmark, and deservedly so. But it wasn’t the lesser quality of Raimi’s film that bothered me most. No, what kept gnawing at me was the totally unnecessary attempt to take the world of Oz and make it “epic.”

The Wizard of Oz was limited by the technology available at the time. Though it features some incredible visual effects, they are modest in their scope. Everything is very clearly shot on soundstages and the world of Oz is often seen in obviously painted backdrops. This gives the film a quaint charm, but it also fits in perfectly with the scope of the narrative. It isn’t an epic film. It’s about characters on a quest, but the stakes are as simple as going to see a wizard so he can send Dorothy back to Kansas. The emotional importance of the quest is there, to be sure, but nothing about the story requires a larger scale rendering than the one it’s given. 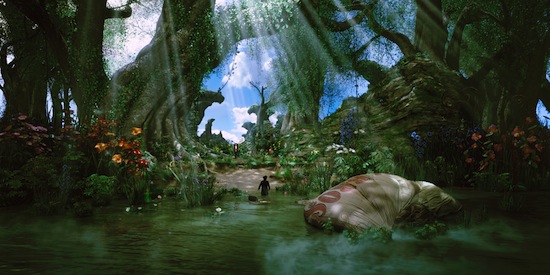 “We welcome you to Epic Land.”

Compare that to Oz the Great and Powerful, which strains under the weight of an unjustifiably epic scope. Though the journey of the main character, Oz, is arguably deeper and weightier than the one Dorothy went through, the film goes much too far in widening its vision of the world it creates. It attempts a mythic rendering of the world of Oz. Apparently it wasn’t enough to tell a nice redemption story in the form of a charmingly simple quest. Heaven forbid the film stick to an airy tone (in one of the more rage-inducing moments, the singing munchkins are essentially mocked and then told to stop singing and dancing by Oz himself).

In a decision I suspect was influenced largely by Disney executives and the film’s producers, Raimi and his writers attempt an epic-ification of the material at hand. Oz needs to organize the people for a battle. There have to be big explosions, vastly rendered flyover shots to establish every location, expansive vistas and huge, ungainly rock formations. The result is a film that feels too big for its story, as well as too serious to be charming, and too ironic in its comedy style. The comedy factor is particularly disheartening. Everything is so big that the only way to inject comedy is to have characters ironically undercut nearly every genuine moment with a not-so-witty jab. 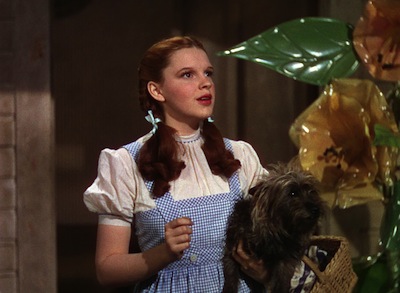 The sequence in the film most emblematic of this epic-ification approach is the introduction to the world of Oz. In The Wizard of Oz we famously see Dorothy stepping out of her black-and white house and into the candy-colored Munchkin Land. It’s a spectacle of sorts, and it’s effective even today. That simple transition from black-and-white to bright Technicolor was enough. How is the corresponding transition done in Oz the Great and Powerful? Oz comes out of the raging tornado, flying in his balloon. The black-and-white, Academy ratio image begins to saturate with color and the aspect ratio slides into the wider 2.39:1 CinemaScope. That in itself is quite simple and tasteful, but the color image and wider frame is then used to show an enormous CGI landscape, and it’s accompanied by loud, dark music. It’s as though the filmmakers felt the need to say, “this ain’t your grandmother’s Oz; this is epic!”

“Look at all my colorful shit.”

It’s not just Oz the Great and Powerful, though, that suffers from epic-ification. My feelings about this trend were equally informed by a recent re-watch of Gore Verbinski’s Pirates of the Caribbean trilogy. Nobody would really claim that the original film, The Curse of the Black Pearl, is a small film. In many ways it is a true epic: spanning a wide geography; glorious shots of the open seas; featuring sword fights and ship battles. It’s a big film rendered on a big canvas, but when you actually sit down to consider it, the film is at its heart a fun swashbuckling adventure and nothing more.

The biggest scale sequence in the film is a ship battle, but it’s done in a pretty standard way for a swashbuckler of its ilk. Cannons are fired, swords clash and people swing around on ropes. The other big action sequences are essentially just well staged sword fights in pretty small locations. One near the start of the film is fun almost entirely for the limited set and the rapport between the two characters. The big scene at the end features a few more characters and the added CGI-aided spectacle of characters transforming between flesh-and-blood and skeleton.

“A perfect vantage point from which to ignore that maelström beneath us. “

The sequels, Dead Man’s Chest and At World’s End, both suffer a multitude of problems, but perhaps the biggest is that somewhere along the line it was decided that being fun swashbucklers wasn’t enough. The series needed to go epic! Huge sea monsters! Outrageously set action sequences! Goddesses! A battle for the very fate of piratedom! The big sword fight in Dead Man’s Chest isn’t content being a well-written, well-choreographed bit of fun. Oh no. It’s three characters fighting on top of a massive water wheel rolling through the jungle. The final ship battle in At World’s End? It’s not enough that the stakes are stupidly high. Heavens, that wouldn’t do at all. Take those two ships and have them firing at each other while spinning around a huge maelström. It’s all too much. It’s too epic, and it never feels justified for the series.

There are many other examples of this. I get the physical scale, but why are the Transformers films all 150-minute-plus epics? Why did Disney need to turn Alice in Wonderland, ostensibly the forbearer to Oz the Great and Powerful, into a dark, Lord of the Rings-inspired epic with huge battles? The same could be said for Snow White and the Huntsman, or The Hobbit, or Twilight: Breaking Dawn, or Prometheus or the upcoming The Lone Ranger. There’s even and animated film coming soon titled Epic!

Finding the impetus behind epic-ification is tricky. As long as there have been movies there have been attempts to make the “biggest” movie possible. This goes all the way back to the silent era with films like the original Ben-Hur, The Ten Commandments, Birth of a Nation and Intolerance. The sense I get these days, though, is that “epic” has become synonymous both with “cool” and with a certain kind of seriousness, if not of tone, then of approach. It’s no longer enough for a movie to have some spectacle and maybe a good action sequence or two. A choreographed fight between two people isn’t cool. You know what’s cool? A battle for the fate of the world with thousands of CGI creatures. These films need to compete for audience attention by proving they can go big enough in scope to make the journey to the theatre worth it.

“The trick is not minding that Hollywood is creatively bankrupt.”

The problem, as I see it, is a bit of a chicken-and-egg scenario. Is it a matter of studios going overboard in trying to make everything big and epic because they think that’s what audiences want, or is it audiences that want it and thus cause the studios to make films this way? It’s difficult to say. It’s clear, though, that CGI is not helping in this regard. It used to be that if you wanted to film a battle scene featuring a thousand extras you’d need to justify the epic task with a truly epic story like Ben-Hur­ or ­Lawrence of Arabia. If you wanted to create the practical effects to realistically portray cities being destroyed, it would have to be justified by the likes of Independence Day. Now it’s all too easy. Even with sequels, the “bigger is better” mentality has gotten ridiculously out of hand because modern effects allow for anything. Take a look at the over-the-top stupidity of Live Free or Die Hard and A Good Day to Die Hard compared to the original Die Hard. No amount of surfing on fighter jet wings will ever be as satisfying as the narrative build-up and payoff in the rooftop explosion sequence in that first John McClane film.

We do still get films like The Dark Knight, Avatar, Inception, Mission: Impossible – Ghost Protocol, Harry Potter 7 and The Avengers, all of which are justified in their scale, both on narrative terms and the need to use size as spectacle. Then you have all those other films. The films that feel the only way they can compete with the truly epic blockbusters is to become epic themselves, even when they strain under the added weight. Already Disney is hard at work on epic-ifying other fairy tales, including the story of Sleeping Beauty. No doubt it’ll be heavy in tone and replete with soaring helicopter shots of vast, foreboding, computer animated landscapes—you know, to sell that epic scope. It makes sense of course, because today, in the age of the epic-ification of the Hollywood blockbuster, if it isn’t absurdly scaled, why bother?