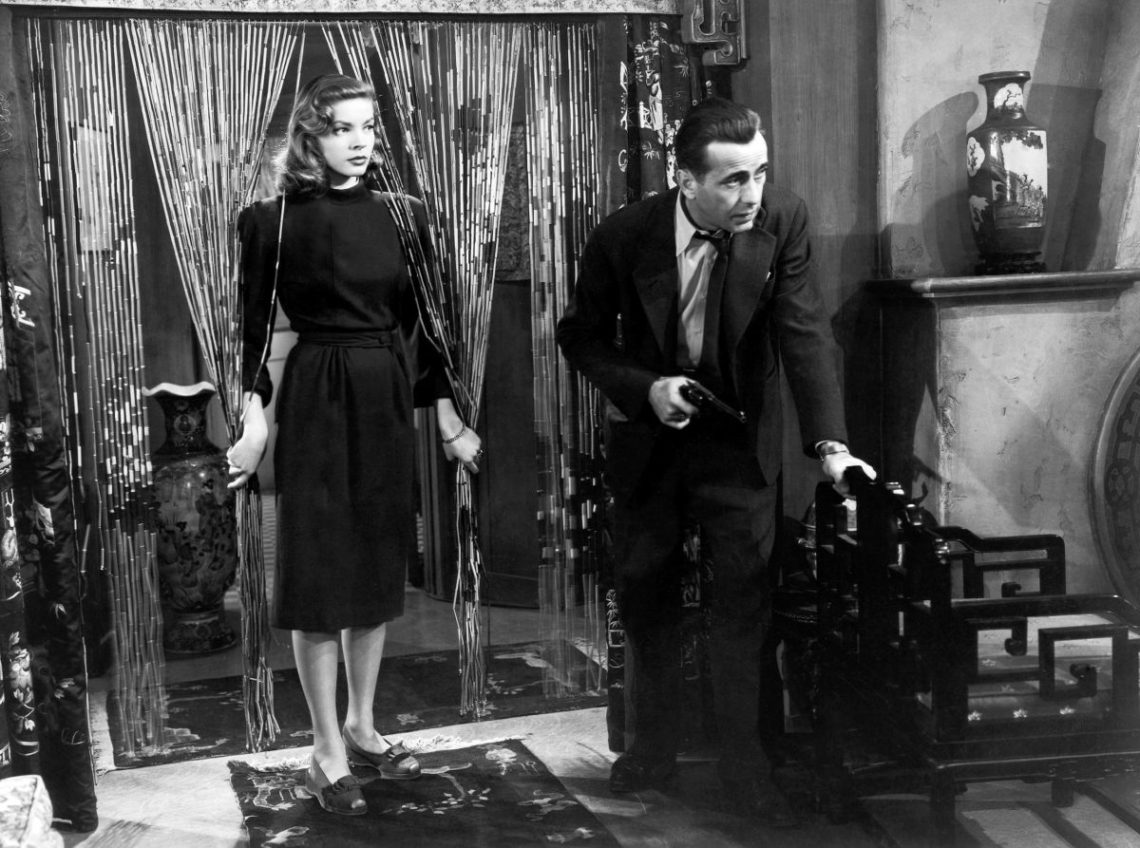 A Masterpiece of Moments: “The Big Sleep” Turns 70

As the story goes, the somewhat convoluted plot of The Big Sleep was so confusing that even those who made the film weren’t quite sure of the details. When asked who killed chauffeur Owen Taylor, for instance, director Howard Hawks had to inquire with the film’s scenarists. No luck there. Still searching for an answer, Raymond Chandler, author of the source novel, received an inquiring wire. His response was a character who was himself already dead. This behind-the-scenes investigation, however exaggerated and ever-changing it may be, is nevertheless worth repeating when discussing The Big Sleep for one revealing reason: As twisty as the narrative is, with plot points left unconnected or entirely disregarded, the whole rises above the sum of its absorbing parts. This is a great movie, a quintessential detective film, an expertly crafted noir from writers William Faulkner, Leigh Brackett, and Jules Furthman (an uncredited Philip Epstein also contributed decisive material), and a star showcase for leads Humphrey Bogart and Lauren Bacall. It is also one of the finest achievements in Hawks’ already illustrious career.

That is not to say there isn’t a story worthy of attention here. As Hawks biographer Todd McCarthy points out, Taylor’s death was, in fact, explained in screenplay notes, and a scene in which Bogart’s shamus Philip Marlowe lays it all out was actually shot and screened—but it was later excised, thus willfully contributing to the confusion. What remains either way is an engaging yarn dabbling in blackmail, gambling, oh-so-delicately implied pornography, murder, and rare books, with staple generic action like stakeouts, shootouts, and back-alley confrontations added to the mysterious mixture. 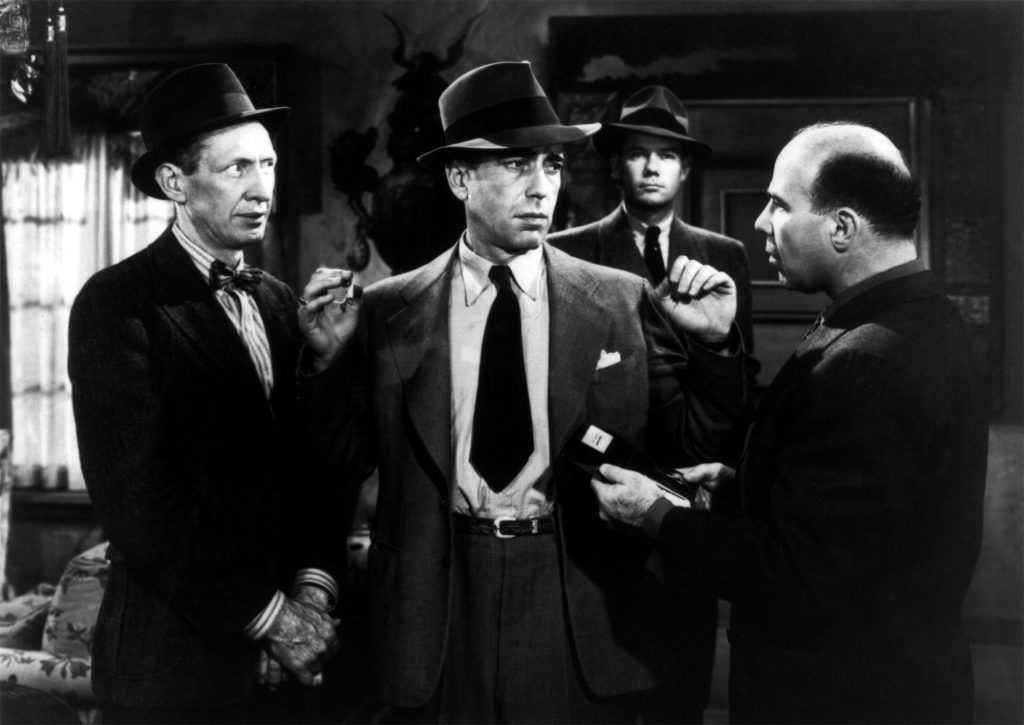 Our streetwise tour guide through the sordid underworld setting of The Big Sleep is Chandler’s iconic private detective, played by Bogart with effusive charm, assurance, and routinely evinced proficiency. In other words, he is a prototypical Hawksian hero: skilled, experienced, and with a reputation for working well on his own and with others. His chief inspector pal Bernie Ohls (Regis Toomey) thinks nothing of escorting Marlowe to a crime scene, talking shop and swapping theories, and his is a trusted-enough name that well-off General Sternwood (Charles Waldron) calls him specifically during a sensitive time of need. A tough-talking but respectful professional, Marlowe promptly agrees to assist the fragile Sternwood, never taking advantage of the elderly man who has money to throw around. And once on the case, Hawks takes the time to show Marlowe, who is present in every scene, looking and thinking, silently and consummately doing work. Prodded by the district attorney to lay off the increasingly intricate assignment, Marlowe carries on, doggedly continuing simply because too many people told him to stop.

Getting Marlowe into this mess to begin with are Sternwood’s two daughters: the plotting, cunning, verbally sparring Vivian Rutledge (Bacall); and the flirtatious, reckless and nubile Carmen Sternwood (Martha Vickers). With a penchant for disreputable associates, these young women come from a life of privilege and regularly get caught in the troubles that go along with such a status—simply put by Ohls, theirs is “a family that things happen to.” The younger, insolent Carmen strikes first, teasingly chewing on her hair, biting her thumb, and intentionally falling back into Marlowe’s arms trying to sit down in his lap while he is standing up. She proves to be a handful indeed, especially when she is found daffy and doped up in front of a hidden camera and a dead body. Given a more maturely tempting introduction is Vivian, a strong-willed woman with a similar knack for attracting the wrong crowd. She first greets Marlowe with what will become a customary tête-à-tête between the two, usually enhanced by drinking, smoking, sideways posturing, and leery-seductive glances. It is an antagonistic early inducement, one that never subsides. Throughout The Big Sleep, gambling allusions between Marlowe and Vivian announce a mutual tendency toward risky games of chance, and Vivian in particular cutely displays a spirited aptitude for Marlowe’s playful back-and-forth routines. Though warned “she gets around,” Marlowe is self-destructively drawn to this enigmatic beauty, and the two revel in the sensual sport of sizing one another up. 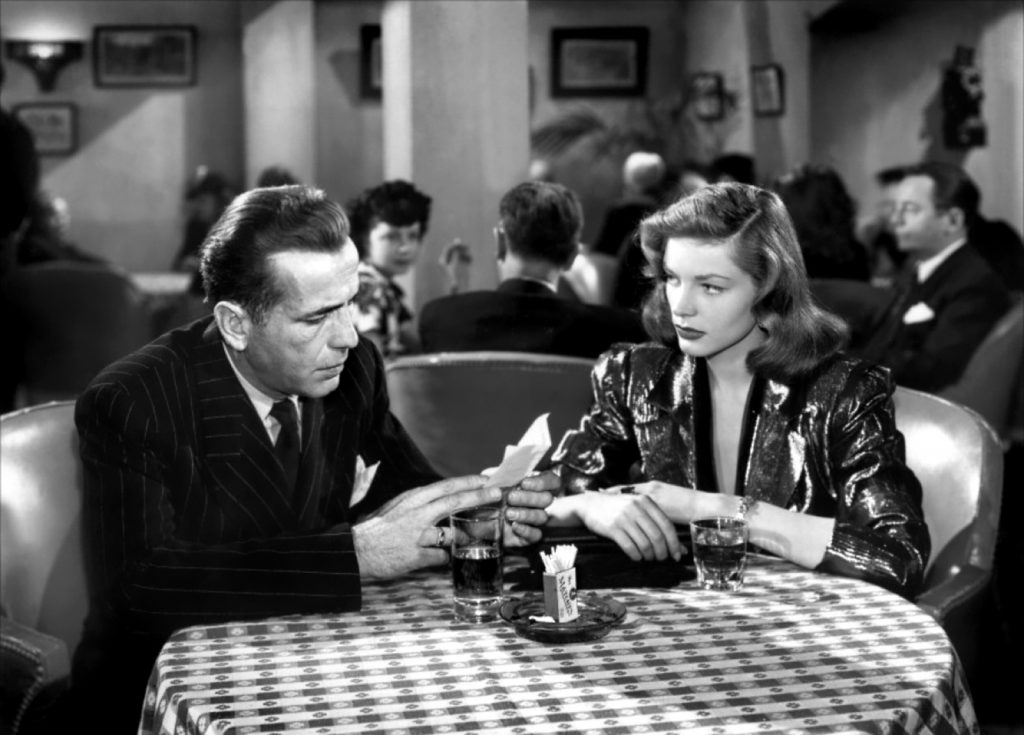 Warner Brothers completed The Big Sleep in 1945, and an early cut was shown to American G.I.s overseas, but the film was ultimately put on the shelf while the studio hurried out its remaining World War II pictures, lest they get stale as the fighting came to a halt. In the meantime, the Hawks-directed To Have and Have Not (1944), Bacall’s debut, had become a tremendous success, thanks in no small part to her sizzling rapport with Bogart. However, her sophomore effort, Confidential Agent (1945), was a less notable accomplishment. Hoping to capitalize on what worked with the former and avoid what didn’t on the latter, Bacall’s agent, Charles Feldman, wrote Jack Warner requesting reshoots for The Big Sleep, additions for the benefit of the film and his now-volatile star property. To be rejuvenated in the updated version, which premiered Aug. 23, 1946, and was released theatrically eight days later, were, first and foremost, moments of smart, suggestive banter between Bogart and Bacall, now a hot item on screen and off, despite their age difference (his 44 to her 19) and his rocky marriage to Mayo Methot. Epstein crafted 12 additional pages of provocative repartee, including a barrage of innuendo and titillating horse metaphors. Though Bogart tried to save his marriage during production, the state of their violent union and the appeal of Bacall superseded the attempts, and their later collaborations on Dark Passage (1947) and Key Largo (1948) further solidified the tandem’s cinematic and real-life potency.

Also adjusted in the process were a number of excised scenes. For example, Vickers was apparently so impressive in her secondary, though immensely alluring, role that she began to overshadow Bacall and, according to Chandler, she saw a good deal of her screen time diminished. Part of what distinguishes Vickers’ nymphomaniacal performance is her sexually charged body language and her racy frankness. In general, The Big Sleep is a remarkably physical film, not in the sense of action or stunt work, but in gestures, subtle movements, and enticing expressions. Starting in Sternwood’s muggy greenhouse, where Marlowe’s discomfort yields sweaty rolled-up sleeves and an undone tie, Bogart is habitually tugging on his earlobe and grimacing, while later, amorous tensions stimulate tongues to part wet lips, eyes to bodily scan up and down, and bare legs to get unashamedly scratched. In many ways, the fictional delight seen between the characters reflected the enjoyment had by most while making the film, the on-set abandon supposedly prompting Warner to pass along a memo stating, “Word has reached me that you are having fun on the set. This must stop.”

The Big Sleep’s somewhat risqué content, either spoken or enacted, would occasionally challenge the production code of the time (what exactly are Marlowe and the covert-seductress bookstore proprietress up to when they close shop and open a bottle of rye?), but under Hawks’ sure-handed direction, the controversies are kept relatively at bay by the diverting juxtaposition of comedic wit and deadly serious ruthlessness. Such an opposition of tone can be seen when the threats of violence that inevitably arise in a film like this falter under its crackling rapid-fire wordplay, which is really what gives the characters an edge and an aggressive empowerment. The inadequacy of clichéd pistol-packing villainy is even given a quip by Marlowe, who comments, “Such a lot of guns around town and so few brains. You know, you’re the second guy I’ve met today that seems to think a gat in the hand means the world by the tail.” 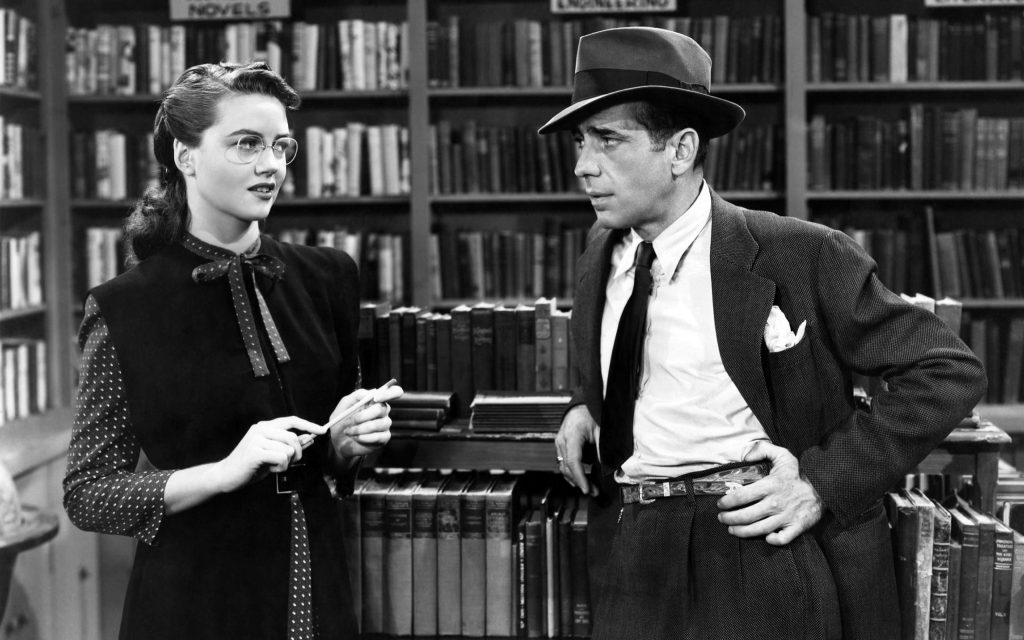 As The Big Sleep unspools in an ambiguous but always fascinating fashion, potential dangers and surprises remain integral and intriguing through expert pacing—courtesy of editor Christian Nyby, Hawks’ cutter on To Have and Have Not and Red River (1948)—and crisp character presentation by the film’s screenwriting trio. New shady figures regularly emerge, causing fresh trouble and upping the stakes, while, at the same time, familiar faces seem to wait behind every door, the constancy of their (re)appearance leading Marlowe and the viewer to speculate on their situation as willing participants or mere victims of coincidence. Performing under the influence of a tonal unease and paranoia, everyone is hot, heavy, and on edge, stoking an inscrutable tension that favors intrigue over reason. As apparent resolutions lead to more uncertainty and it becomes harder and harder to get answers when everyone is asking questions, one is left to wonder if this case can ever truly be closed.

According to McCarthy, the two cuts of The Big Sleep significantly demarcate a wider alteration in Hawks’ filmmaking approach. “The first cut represents the culmination of Hawks’ dedication to narrative, to classical storytelling principles, to the kind of logic that depends upon the intricate interweaving of dramatic threads,” he writes. “The revised, less linear cut sees him abandoning these long-held virtues for the sake of ‘scenes,’ scenes of often electrifying individual effect, but scenes that were weighted heavily in favor of character over plot and dramatic complexity.” The effectiveness of this jagged form over cogent content is what often led Hawks to disregard the film’s narrative, stating, for instance, that plot “didn’t matter at all,” adding, “I never could figure the story out.” Even the meaning of the film’s title was up for debate: “I don’t know, probably death. It just sounds good,” mused the director. Though there are scenes where Marlowe recites recent events, earnestly attempting to bring everyone, viewer included, up to speed, the obligatory explication is dispensable. Echoing Hawks, who commented, “All we were trying to do was to make every scene entertain,” McCarthy rightly calls the film “massively entertaining on a moment-to-moment basis.” And if by film’s end it doesn’t all add up, it also doesn’t really have to.