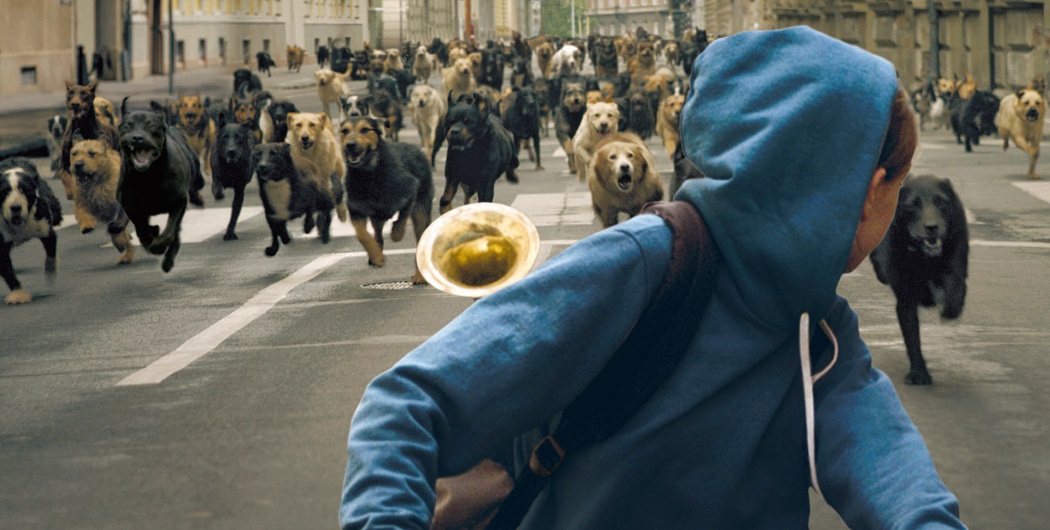 Dogs are better than humans. Deep down, we all know this, though we may not acknowledge it. It is for this reason that, though it is rife with flaws, White God is a magnificent achievement. Any film that exploits the inherent greatness of canines with a story in which they – and not people –are front and center cannot be ignored.

Hagen (Body and Jake) is a good boy. He is unfailingly loyal to his human, Lili (Zsofia Psotta), who is dismayed at the prospect of spending a few months living with her asshole dad Daniel (Sandor Zsoster). Tensions between father and daughter boil over until Daniel, not wishing to pay a steep fine to keep Hagen (due to his mutt heritage), leaves the poor dog by the side of a road. Hagen then sets out on a harrowing journey through Budapest, during which he is subjected to all the cruelties mankind has to offer. But eventually, enough is enough, and Hagen leads his fellow downtrodden mutts of the city in a merciless uprising.

Whenever it focuses on Hagen and his plight, White God is a riveting, sometimes unbearably sad drama. But the movie keeps cutting back to what Lili is up to in Hagen’s absence, which sometimes threatens to undo the whole piece. There’s nothing about her teenage rebellion that could possibly match the actual rebellion that her dog instigates. Her segments of the film could disappear, and no one would either notice or miss them.

But while Lili’s story has been done plenty of times before, never before in cinema have we seen a mass canine revolution, and when the third act rolls in with a horde of dogs swarming the streets of Budapest, it is absolutely exhilarating. Using animal actors has fallen by the wayside in favor of CGI creations in recent years, but there’s none of that in White God, which features a cast of hundreds of flesh-and-blood dogs (all of whom, incidentally, were strays rescued by the producers and given their own homes after the film wrapped). The sheer logistics involved in coordinating these sequences are staggering, but this movie makes it seem effortless.

White God is sometimes a mess, but there are very few films like it, and what it does well it does with invigorating flair. A broad but often poignant allegory of oppression, it’s like the beautiful puppy of Au Hasard Balthazar and The Plague Dogs.