Something Old, Something New is a bi-weekly column that creates a double feature with a film released in the last few years and an older movie. These films contain aesthetic, narrative and/or thematic parallels that can erase decades of separation and show how ideas and styles echo across cinema history.

Harmony Korine’s Spring Breakers and Jacques Rivette’s 1976 Duelle (une quarantaine) are feminist films less about the empowerment of their characters than their emergence as human beings outside the restrictions of their conscious typing. Both revolve around a quartet of women and the lone male to have any consistent interaction with them. Often, they “revolve” literally: Rivette’s camera constantly moves in arcing track-pans, swiveling around the action to displace the actresses within the mise-en-scène as dynamic spatial relationships reflect ever-shifting power dynamics. Spring Breakers moves via recursive editing, looped systems of action that visualize the rippling effect of the leads’ liberation.

Rivette’s film, an oblique homage to film noir, divides up its characters into generic types: Dietrich-esque man-eater Viva (Bulle Ogier), sultry fatale Leni (Juliet Berto), wearily overworked moll Jeanne a.k.a. Elsa (Nicole Garcia), and innocent, earnest Lucie (Hermine Karagheuz). Rivette typically isolates the women two at a time in the frame, or one at a time with Lucie’s brother, Pierrot (Jean Babilée). Their pairings bring out the individualistic elements of each character, using internal friction as a means of subtle conflict then played out more openly against Pierrot.

Korine, on the other hand, typically shoots his leads (Selena Gomez, Ashley Benson, Vanessa Hudgens, Rachel Korine) exclusively as a group, collectively embodying a single reductive gender stereotype as bikini-clad party girls. Whenever a girl drops out of the picture for whatever reason, she is never followed back home. Rather, Korine remains those still on spring break as they paradoxically lose even more of their distinctive traits as the smaller group grows denser in their pursuit of an escape that morphs into a quest for the perverted American Dream. Like Pierrot, Alien (James Franco), functions as a sort of anchor for the mysterious actions of the women, abused and adored in equal measure by those who can transcend his influence even as they (like some of the figures in Duelle) can eventually meet him on an empathetic level that bridges some of the gender divide.

The male/female split is a binary opposition common to both films, though each erects a different set of dialectical juxtapositions to complement it. A sample of Spring Breakers’ binaries: religious/secular, innocence/bacchanalia, white/black. Duelle, which gradually reveals a transdimensional battle of goddesses beneath its noirish surface, plays upon more abstract dialectics of sun/moon and supernatural/natural. Even the various types played by the characters across both films stem from narrow generic and social divisions.

Yet Korine and Rivette both set about blurring the lines of their respective oppositions, aiming for emotional, human truths between intellectual goalposts. Gomez’s Faith erodes the moralistic condemnation of spring break’s prolonged orgy with a voiceover phone call back home that earnestly finds spiritual awakening in getting away from restrictive religious boundaries. Even when she senses the group getting in too deep, she rejects only the possibility of crime, not whatever alcoholic or sexual escapades she may have had. Brit (Benson) and Candy (Hudgens) pursue gray areas of both sex and race, be it in a sexuality-upending scene that warps the phallic imagery of guns or a climax that uses blacklights and ski-masks to aestheticize the strange layers of their racial identification. They too call home in a euphoric state at having found themselves, not merely in reference to the lifestyle they are set to inherit but a freedom of being previously denied them.

Similarly, Duelle takes advantage of its elliptical structure and gradual tilt off its own axis to surpass its rigidly defined generic conventions . Leni is a vampiric, pansexual seductress, but she also feels pangs of sympathy when Pierrot’s handling of the diamond she and Viva covet for its mortal properties. Even the final battle between her moon goddess and Viva’s sun diety is subverted by Lucie, who grows while retaining her basic sense of self in the way Brit and Candy remain blonde white girls even as they come into a different state of being through their actions. And if Spring Breakers surely folds its actresses’ pedigrees into its thematic arc of overcoming the burden of reductive, limiting imagery, Duelle incorporates reflexive theatricality into its own movements, using costume changes and alternating chemistry to push deeper into their roles until they break through to the other side. 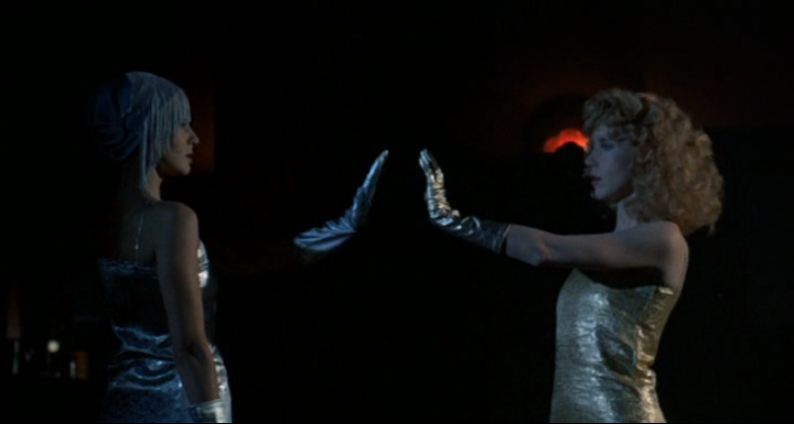 A recent Indiewire article, springboarding off an ignorant and myopic understanding of film noir, wrongly identified Spring Breakers as a superlative neo-noir. Yet it is not a noir for the same reason that Duelle, ultimately, is not one, either: Though both films clearly function within social and artistic contexts that unsuccessfully attempt to define their characters, they hone in on ambiguities of identity, not morality. Duelle uses naturalistic, realist mise-en-scene to gradually draw out parallel dimensions that project types against metaphysical planes where they no longer apply. Conversely, Spring Breakers employs its vividly stylized frame and grotesque descent into crime to find more nuanced, real approaches to people who do not exist in sexual, racial or financial bubbles.

The women of Korine’s film do not find themselves because of drugs, booze and sex, but those elements do act as a catalyst for which Korine does not judge them. Illicit substances prompt growth in Duelle as well; Lucie comes into own by harnessing an object that makes working-class mortals feel invincible and aloof, aristocratic demigoddesses regain access of their earthly senses and blissfully gives them a taste of mortality. Or, as it was called during the disco era in which Rivette’s feature is set, cocaine.