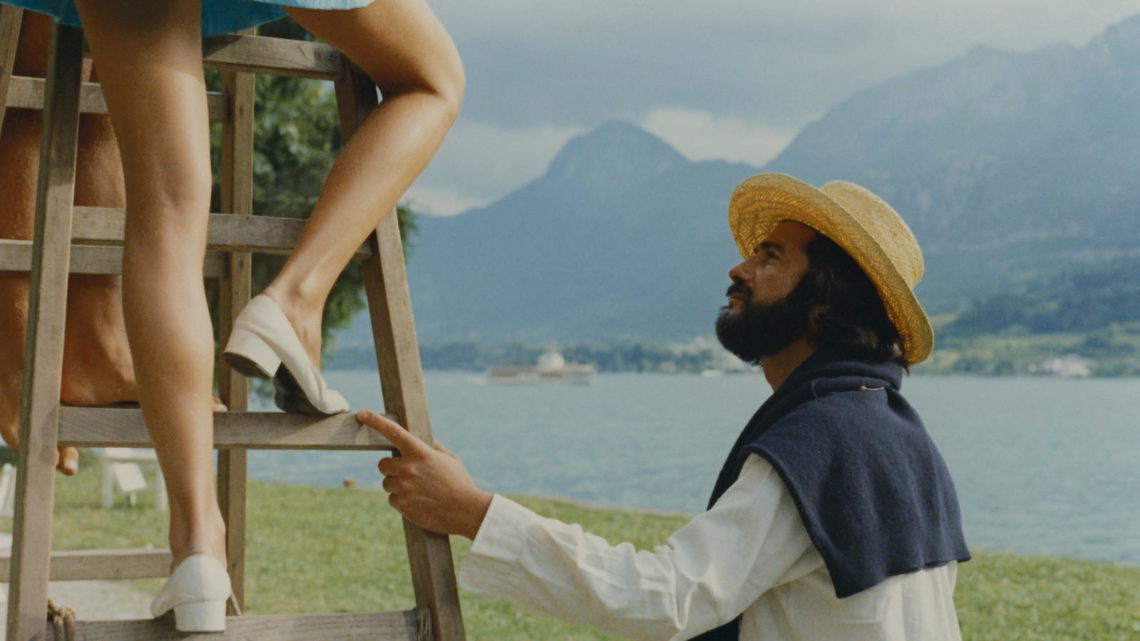 The Victory of the Moralist: On Rohmer’s “Six Moral Tales”

Eric Rohmer is now in fashion—in fact, he might be in danger of becoming canon. The great filmmaker passed away in 2010; a near-complete collection of his films came out on Blu-ray in 2014, courtesy of the French company Potemkine; and an exhaustive, admiring biography of him by Antoine de Bacque and Noël Herpe was translated into English and published earlier this year. His oeuvre suddenly becoming accessible, both to view and to research, Rohmer the generally admired appears to be quickly becoming Rohmer the universally venerated. As I consider Rohmer one of the two or three greatest directors, I certainly encourage this development, and rejoice that we are now seriously investigating the visual depth of a director whose “literary” qualities have tended to obscure his other strengths. To me, the literary qualities of Rohmer’s style are inextricable from his realistic conception of cinema; the seemingly well-mannered construction of his films conceals a profound taste for entropic narratives that rely heavily on the ambivalent qualities of the cinematic image.

Although Rohmer’s later films from the ’80s and ’90s gain new enthusiasts by the day, the director’s reputation still largely rests on the Moral Tales, a series of six films made in the wake of the French New Wave, starting with the short film The Bakery Girl of Monceau in 1963 and ending with Chloe in the Afternoon in 1972. It is in this ambitious series—currently playing in new digital restorations at Film Society of Lincoln Center in New York—that Rohmer first establishes many of the tropes that one tends to associate with his films: lively and plentiful dialogue; thoughtful and beautiful young protagonists; intricate, structured plotting; unreliable first-person narration; themes of fidelity, romantic arbitration, self-delusion. 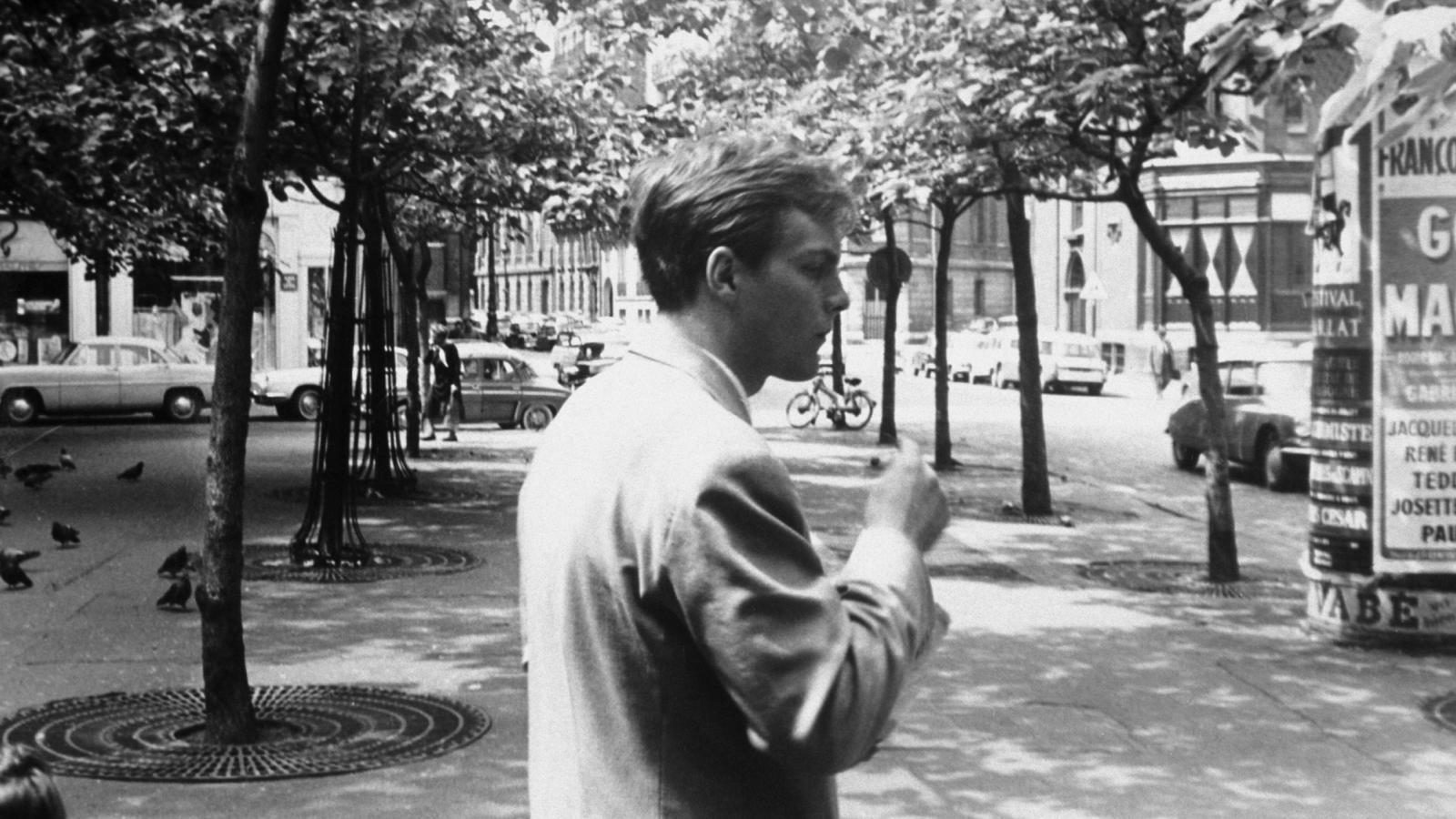 Excluding Claire’s Knee, all of his moral tales have varying amounts of voiceover narration, used to frame the films as first-person narratives. In The Bakery Girl of Monceau, the series’ most heavily narrated film, what little spoken dialogue there is is overdubbed—the unnamed main character played by Barbet Schroeder almost literally “tells” the film. Here Rohmer’s technique is presented in its simplest form: What the character tells us is a perspective on the events that seems less ambiguous, more simplified than the reality that the filmmaker shows us. The character says he has no interest in the bakery girl with whom he’s flirting, but his face perhaps gives something else away. It is not necessarily that the character’s judgments are wrong, but that they seem incomplete when soundtracked over the images that Rohmer has chosen to show. He creates a rift between his characters’ perception of themselves and the audience’s perception of the characters.

This rift in perception, which analogizes easily to the literary concept of the “unreliable narrator,” is explored with varying complexity in many of the moral tales. Suzanne’s Career, the second in the series, recapitulates the narrative of Bakery Girl in a fairly straightforward way: Bertrand (Philippe Beuzen) flirts with a woman he claims not to be interested in. Like Bakery Girl, Bertrand’s voiceover narration assumes a position of authority over the events, casting Suzanne (Catherine Sée) as helpless against Bertrand’s innocent charms. But the film goes a step further by pulling the rug out under its male protagonist, as Bertrand’s cynical condescension is demolished by the depth and calculation of Suzanne’s ultimate betrayal. This plot turn is refined further in La Collectionneuse, the fourth film in the series but the third released. The protagonist, foppish, artistic Adrien (Patrick Bauchau), projects the image of a hardened heartbreaker but gets caught in an increasingly humiliating game of thwarted seduction with Haydée (Haydée Politoff), the titular “collector,” ending with him licking his wounds by calling his fiancée.

La Collectionneuse is probably the furthest Rohmer goes in torturing his male protagonist: In no other Rohmer film does the protagonist’s defeat feel so protracted and total, the last shot of him on the phone a postcard image of despair. And yet, neither that nor Suzanne’s Career register as simple comeuppance narratives against masculine folly: Suzanne and Haydée’s victories are shaded by a tint of cruelty and reveal unnerving battle experience. Rohmer’s theme is put in plain terms in these films: The world is much darker than you think it is, and the cynical posture that one puts up can only be a cover for naïveté. 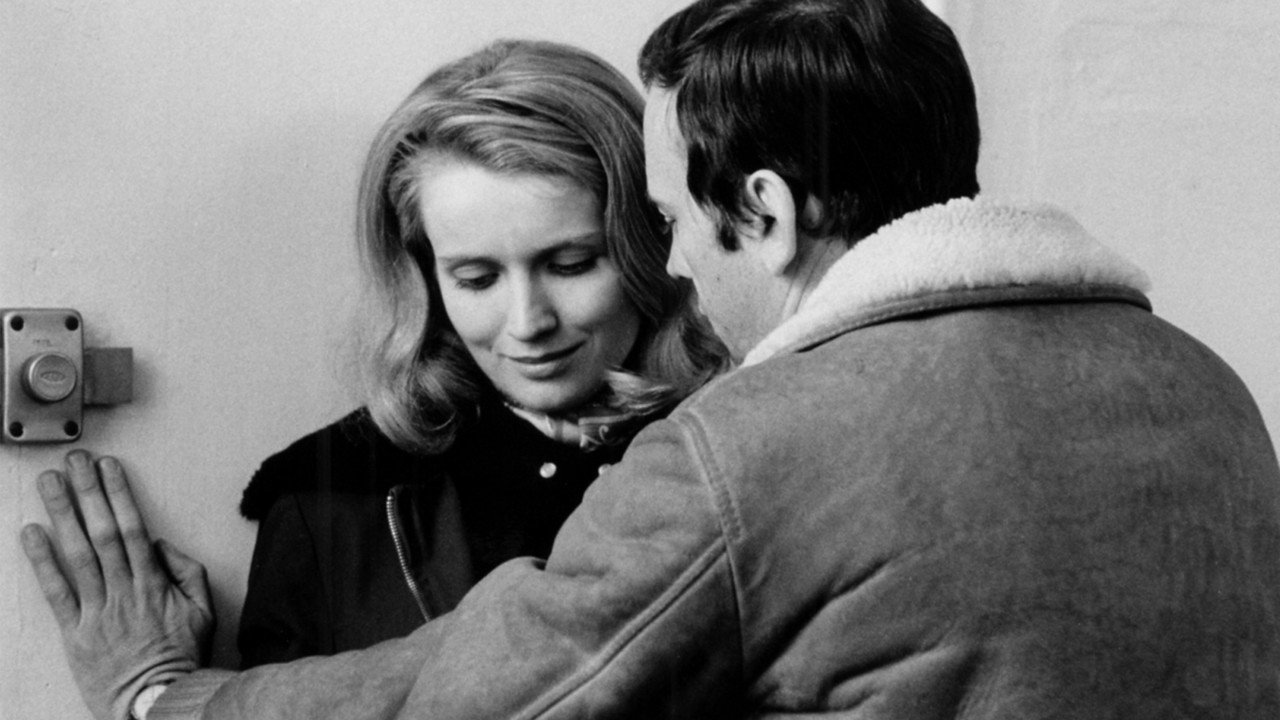 In My Night at Maud’s, one of Rohmer’s greatest and most iconic films, this theme evolves to accommodate a religious narrative in which Rohmer puts all his effort into standing equally on either side of a spiritual debate: the Catholic side represented by Jean-Louis Trinignant’s pious engineer Jean-Louis, the atheist side represented by Françoise Fabian’s charming divorcée Maud. The centerpiece of this philosophical narrative is a protracted scene in which Maud attempts to convince Jean-Louis, who has already made up his mind to marry a woman from his church, to go to bed with her. This scene lasts for about 15 minutes, although it always feels like it takes up much more of the film; and although the shots actually vary quite a bit, one nevertheless has the impression that the whole thing was planned as a shot-reverse-shot sequence. The beautiful thing about this flagrant assault on the notion of “filmed theater” is how Rohmer takes a technique meant to denigrate the cinematic reality of the single shot and instead uses it to enhance said reality. A typical shot-reverse-shot sequence is planned so the director can easily motivate dialogue and not have to fuss so much about where to place the camera. Usually this results in two shots that become increasingly irritating to look at. In Maud, however, while the camera positions during this scene remain technically the same, the unusual rhythm of the edits repeatedly re-energize our interest in the materiality of the actors, their gestures, and their relation to the room, the bed, the pillow. The reason Rohmer is able to do this is because his actors go along with him, providing not only a reasonably intelligent and believable discussion of such high-minded topics as Pascal and Marx, but also a variety of behavior and emotion that nevertheless stays within the bounds of characterization. One might say that the emotional movement of the conversation is in counterpoint to the progression of the dialogue—Rohmer’s camera tracks minute changes in Maud’s position on her bed, Jean-Louis’s posture in his chair, the fiddling of his hands, the angle of her legs. The dialogue suggests a college debate, but the images suggest a Lubitsch romantic comedy.

Thus the familiar rift between the audience and the protagonist is established, but with a technique different from the unreliable narration of the previous Moral Tales (Maud only has three lines of voiceover, to give the film the shape of a first-person narrative). While the characters are engaged in a spiritual struggle of great personal significance, the outcome of which might topple love and faith in one go, the audience is seduced by Maud and wants nothing more than for the charming couple to fall into each other’s arms. The third act, which follows Jean-Louis as he pulls away from Maud and succeeds in pursing his more austere blonde, rebukes not the authority of the protagonist, as in La Collectionneuse, but the authority of the viewer, which makes it seem distant, solemn. The last line of voiceover, which pokes a hole in Jean-Louis’ bourgeois happiness, is an olive branch extended to us, the director acknowledging our naive desire but sticking to the inevitable family, the uninviting beach. 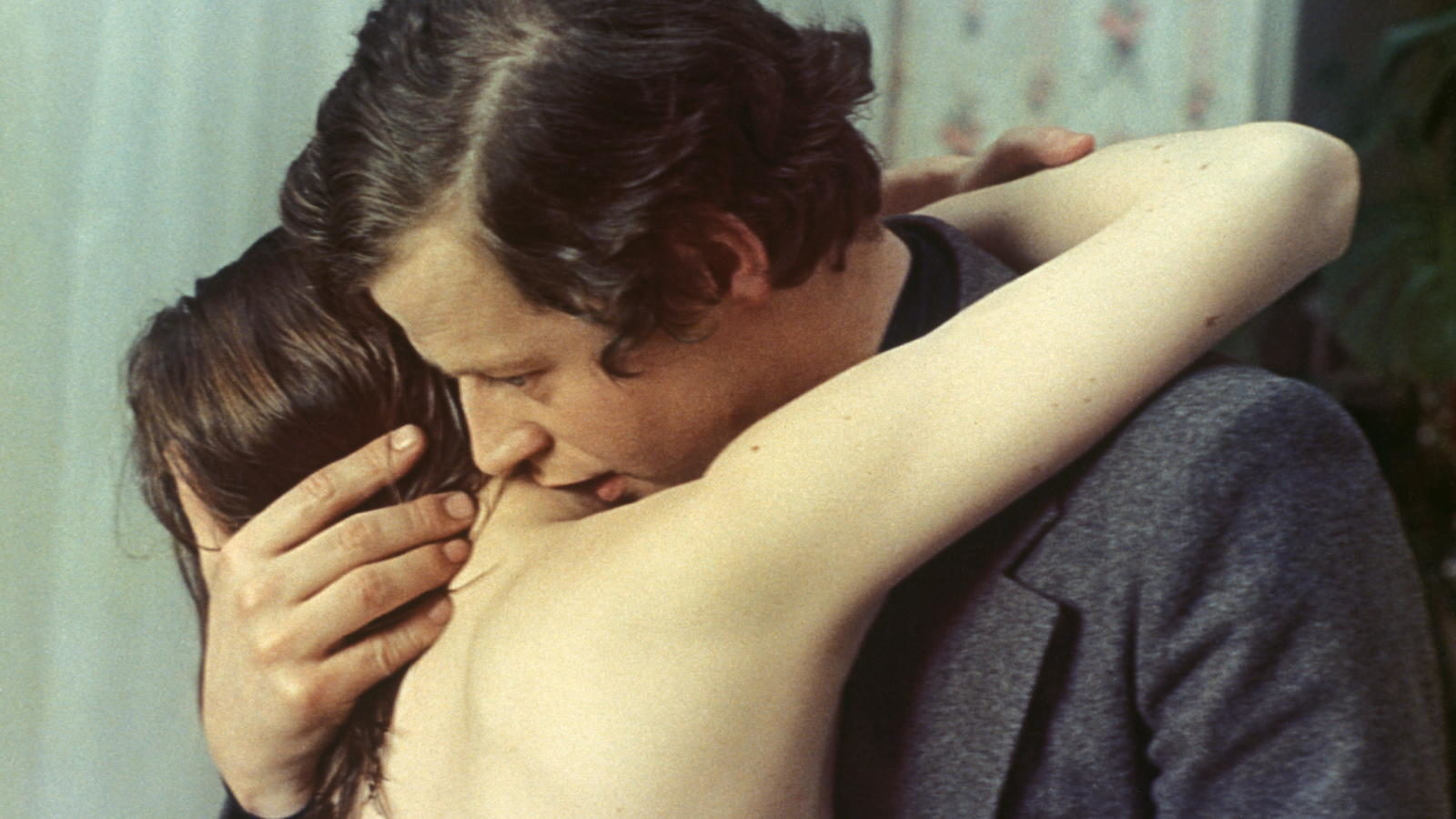 In my mind, Maud pairs nicely with the sixth film in the series, Chloe in the Afternoon, especially if one wants to track the varying degrees of approval Rohmer has for the bourgeois family unit. In Chloe, married office manager Frederic (played by Bernard Verley) is tempted by an old friend from his bohemian days (played by Zouzou, mostly known as a model and icon of Parisian nightlife outside of this role) who seems eager to fulfill his fantasies of having an affair. The stakes are higher and lower than those in Maud: higher because he’s married and has a child on the way, lower because it’s less a matter of self-definition and more a straightforward matter of resisting temptation. I confess to having always had difficulties with Chloe: Unlike Maud, there is no olive branch—Rohmer films the tearful ending, in which the man flees his affair to reunite with his wife (played by Verley’s real-life wife, Françoise), without any obvious irony, and to me, it feels too much like a simple validation of marital fidelity. But then, what to make of the three-part structure, with a heavily narrated and subjective part one (with a dream sequence to boot) giving way to a part two and three that seem divided by Chloe’s ultimately inconsequential departure and return? What to make of the unusual scenes with the wife—awkward marital postcards with only faint hints of bliss—and the faint suggestion that she herself might be making love in the afternoon? And what to make of that final banal shot of the books along the window, which suggests classic Hollywood-style censorship of a marriage consummation? Perhaps Rohmer has again successfully created a rift between me and the fiction that will perhaps take some more time to understand.

Claire’s Knee, the fifth film in the series, seems something of outlier, with no voiceover narration and more of an ensemble feel, with many characters competing with the protagonist for our sympathy and curiosity. Nevertheless, the film tries to proceed as a first-person narrative, allowing a novelist character, Aurora (played by Aurora Cornu), to take the duty of imposing a plot on the frivolous intrigues of Jerome (Jean-Claude Brialy). Indeed, the first half of the movie reminds one of La Collectionneuse: the gorgeous vacation-house setting, the young, impetuous ingenue Laura (the delightful Beatrice Romand), the older would-be seducer finally feeling too humiliated to continue. It is in the second half of the film, though, that Claire’s Knee’s genius becomes apparent as Laura recedes into the background and Claire (Laurence de Monaghan), her step-sister, catches Jerome’s attention. Wrestling his destiny back from Aurora’s grasp, he concocts a plan to caress Claire’s knee, and wanders into the depths of vulgarity and cruelty to fulfill this plan and assert his dominance over the narrative. Our sympathy for him erodes—Rohmer even winks at us by giving Beatrice a protracted shot in which she berates Jerome—and the sequence in which he “succeeds” plays out like a scene from a horror film. In this film, Rohmer allows his male protagonist the most comprehensive revenge against the other sex, but the last scene effortlessly demolishes Jerome’s hard-won authority. Aurora takes back the reins and shows us a world hardly budged by all the evil contemplated and acted upon within it: a reality unmoved, unchanged, unrelenting.

Claire’s Knee reveals a core aspect of Rohmer’s style: He is always attempting to get to a better perspective than his characters, and to give this perspective to the audience. He respects reality, and must represent it to us at a remove. This is, in fact, the attitude of a studious moralist: An author’s superior analysis of both fiction and reality grants him/her the authority to speak of morality. And yet one looks at these films and sees Rohmer embracing ambiguity, letting mystery seep through. He will allow us to feel that the film is pulling away from us, that the “guide” we thought we had is taking us down surprising, even displeasing journeys. In our opposition to the development of the films, we feel the strongest hints of reality, of a perspective so large we have difficulty fathoming it. All of the protagonists in the moral tales might applaud themselves for fidelity; and since we cannot applaud them, we can only think about them. And when we think about them, we think about ourselves—the ultimate victory of the moralist.