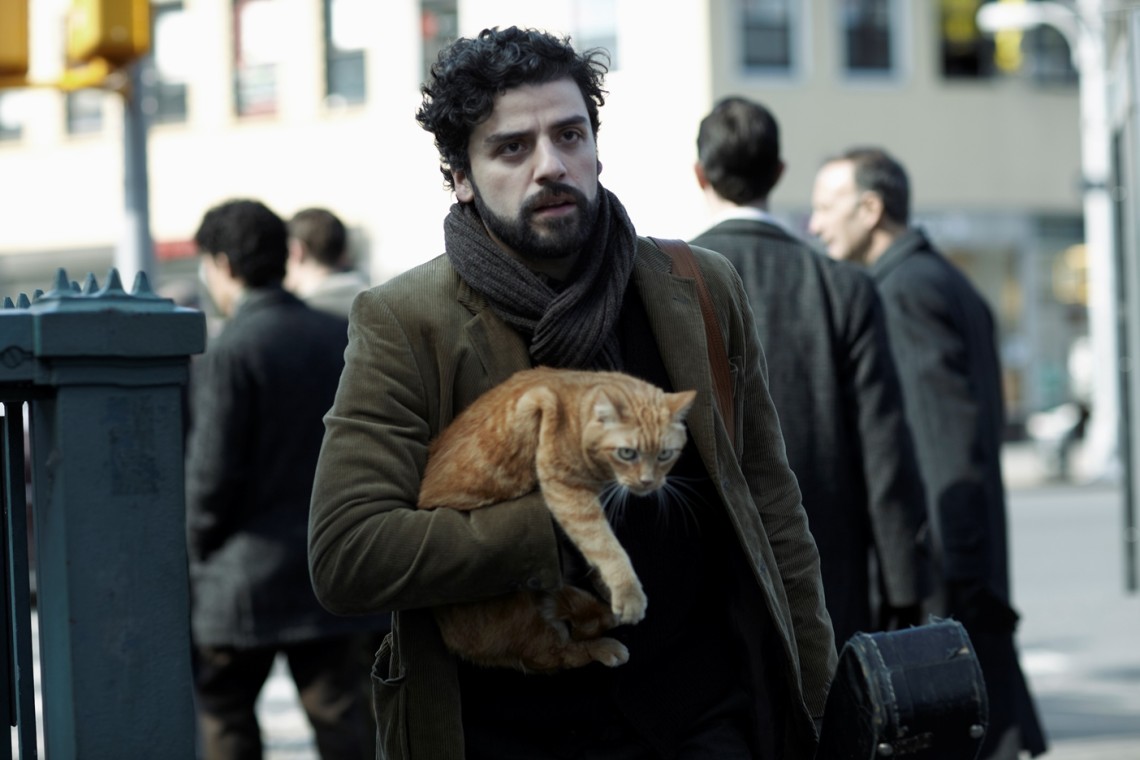 Sacrificing The Cat: How An Unexpected Faith Condemns ‘Llewyn Davis’

Note: The following essay contains spoilers for Inside Llewyn Davis.

Even when Llewyn Davis sits behind the steering wheel, he is never in control.

Directly behind him sits a titan of a bygone era. Roland Turner (John Goodman), a jazz musician whose star has faded, eyes him with contempt. When Llewyn disrespects him, his tone an abrasive cocktail of working-class aggression and artist’s pomposity, Turner warns that he doesn’t have to resort to threats of physical violence because he has the practice of a higher power on his side: Santería. One day, the man intones, Llewyn might feel an awful pain in his side. Or he might just wake up one morning and ask, “Why is my life such a bowl of shit?”

This seemingly out-of-left field claim feels like just one more ornate accessory to go along with Turner’s bowl haircut and purple regalia. Part of the humor comes from recognizing that a curse like that seems pretty redundant: Llewyn’s life is already an exhausting trial, largely due to his own decisions as he stubbornly pursues a career as a folk musician on his own terms. It’s himself he should worry about, not some supernatural force.

Llewyn’s road trip to Chicago with Roland Turner and his “valet” Johnny Five (Garret Hedlund) goes awry when a cop whisks Johnny away, leaving Llewyn stranded with Turner unconscious in the backseat. He abandons the car, experiences deep disappointment in Chicago, and returns to New York, accepting a gig at the Gaslight Café, the same venue he plays in the film’s opening. He then performs “Hang Me, Oh Hang Me,” the same opening song, and follows it with the same quip from earlier: “If it was never new and it never gets old, it’s a folk song.” We think for a moment it’s a clever comment on this character’s inability to connect to others; he only knows one joke. But following his set he has the identical conversation with the Gaslight’s owner and sustains identical injuries from a shadowy, as if he’s forever trapped in the “cesspool” of the city to rot.

Joel and Ethan Coen are often criticized for playing God with their characters, whose heightened flaws and endless misfortunes suggest that their creators revel in torturing the hapless and casting poetic justice upon the wicked. In Davis, though, they’ve transcended natural disasters and physical incarnations of Death itself, altering time and space to deliver their cruelest judgment yet. The film’s structure is not a traditional arc, but a Mobius strip, and Llewyn’s life is a folk song, never new and never getting old. It literally ends as it begins, closing Llewyn’s hellish week into an infinite loop.

As a boy raised Roman Catholic, I recognize this concept as an all-too-familiar staple of Sunday school. Hell was often relayed to me as the worst day of one’s life repeated forever (the Groundhog Day model of eternity), and purgatory is always broadly defined as a place of purification designed to absolve souls of their sins over a long stretch of time and torment. In the limbo of the Coens’ defiant story structure, they have topped their own accomplished list of memorable death scenes by giving poor Llewyn a fate worse than death.

It’s hard to know what to make of the traces of Catholic mythology in a film with no religious characters or iconography. There are no easily apparent biblical allusions in the way A Serious Man channels Job or O Brother Where Art Thou? is bookended by acts of baptism. Where does Llewyn’s limbo originate? 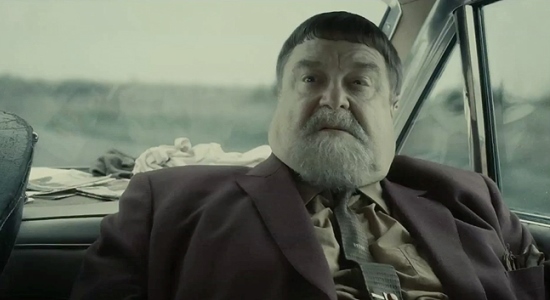 I believe Llewyn’s fate is the follow-through from Turner on his warning: a Santería curse prompted by Llewyn’s selfishness. Basing a theory on such a slight joke may seem misjudged considering the Coens’ penchant for non sequiturs and narrative tangents, not to mention their irreverent attitude towards resolutions. When viewed through the context of Roland Turner’s religion, however, several aspects of Inside Llewyn Davis take on a second life of complexity.

Santería originated as the Ifa religion in West Africa, a faith devoted to spirit guardians of the natural world called “Orishas.” When the slave trade forced West Africans into the Caribbean, they successfully smuggled their faith into the exclusively Catholic colonies by syncing each Orisha with a Catholic saint, creating the faith known commonly as Santería. It’s a clever compromise between wildly different modes of worship.

Llewyn Davis repeatedly rejects the idea of compromise. It’s all or nothing for him, a successful solo career or a return to working class life, with no allowance for any other option. Influential music mogul Bud Grossman doesn’t want him as a solo act but offers him the option to play in a group, a small surrender than could lead to greater things. Llewyn refuses; for all his claims to be a serious artist, he doesn’t seem that creative when it comes to molding his career.

His brief stay with the Gorfeins culminates with their housecat running out of the apartment. When he finds another orange tabby on the street, he thinks it’s the same one, but he can’t convince the Gorfeins. He takes the doppelganger cat on the road with Turner and Johnny, abandoning it with the jazz man once the road appears too hopeless and narrow for him to consider another living being. Driving back east, Llewyn hits an identical cat that darts across his path, and he stares grimly at the blood on his bumper, recognizing for the first time the wounds he inflicts on those around him.

The lingering look at the cat’s blood suggests a religious currency for both Santería and Catholicism alike. Santería has utilized the collection of animal blood for religious rituals since its advent, offering up the life essence of lesser life forms to appease the Orishas and bring about change in fortune and – most relevant here – purification from sins. It’s very telling that Llewyn crosses paths with the cat while returning to New York: he’d be passing the same place he abandoned Roland Turner and the cat. Turner’s fate is unknown, but he’s the kind of man who always has the last word, so he does what he claimed he had the power to do:

Why use a housecat to induce the curse? Perhaps it symbolizes Llewyn’s struggle to chase down his elusive lost innocence in the form of an adorable pet, or a parallel between a cat’s stubborn “nine lives” and his persistence. But a cat is also a trace of nature in a manmade world, the lingering presence of the natural earth in an urban landscape of brick and pavement. New York’s crowded constructs choke every frame of Inside Llewyn Davis, and these cats provide an all-important link to a world buried and forgotten. Santería originated out of the worship of nature, and it insists upon honoring that natural world.

Llewyn Davis honors nothing, though, so he eventually leaves the cat behind. 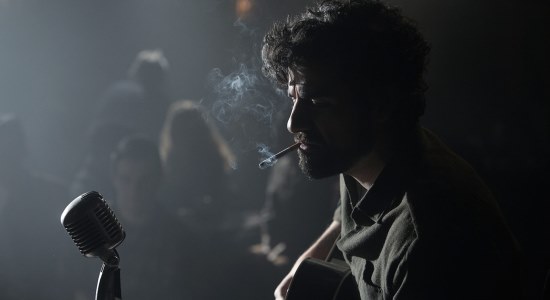 Llewyn is doomed to play the same set for all eternity.

Coen characters are always defined by their allegiances, operating as committed agents for crime syndicates, political parties, small-town law enforcement, or other institutions. They enthusiastically define themselves by a philosophy, an outlook, an absolute. They have faith in something. But Llewyn Davis is his own authority, serving no master, and that cannot go unpunished.

Llewyn’s sins further lie in his disrespect of his one sacred value. Haunted by the suicide of his former partner Mikey Timlin, he carries the “solo” aspect of his act into every other facet of his life, clinging to music as an ideal to be upheld. (“That’s all I got,” he tellingly remarks to a Gaslight audience.) But he profanes the one thing he claims to hold sacred. He performs as a session player for a novelty song he actively dislikes in order to make a quick buck, and dismisses other musicians, even spewing obscenities at a defenseless woman performing folk for the first time (his version of blaspheming in church). Ultimately, Llewyn tries to abandon his faith entirely, attempting reclaim a career as a merchant marine. He talks big, but he thinks narrowly; he’s a man who fails to meet the one standard he claims to hold.

Llewyn also disregards another major tenet of Santería: a reverence for one’s ancestors and the great figures of bygone eras. He fears his father’s dementia and conceals it in casual disrespect. He holds no interest in the topic of “early music.” He grossly insults the Gorfeins in their own home (note the African masks decorating their apartment, more evidence of the Santería influence).

Johnny Five, Roland Turner’s caretaker, acts as an intriguing counterpoint. We see devotion in Johnny when the time comes to keep Turner alive. In a rest stop overlooking both directions of the interstate (a bird’s-eye view of the Mobius strip overlap), he reads poetry while Llewyn watches impassively, offering his musical Orisha a tribute in the only ritual, modest yet sincere, he can muster. Llewyn, in contrast, thinks only of himself, and for this, he is damned.

The Coens provide one last beat of false hope before snaring their trap: Llewyn returns defeated to the Gorfeins’ apartment to find that their bona fide cat, Ulysses, returned home. But from the moment he wakes up to find Ulysses inches from his face, seasoned Coen veterans feel a sense of dread most audiences would only derive from a ticking time bomb. Turner has twisted Llewyn’s arc shut for good. He is forced to repeat a week of failure, taunted by figures who have managed to ascend from limbo: his alley attacker, military-man musician Troy Nelson, and a young Bob Dylan, whose innate talent turns even Llewyn’s head, tantalizing him with a future he’ll never obtain. Llewyn belts “Hang Me, Oh Hang Me” with a palpable wish for death’s embrace, but death will not come until his curse is lifted. Until then, he is doomed to follow the shape of a noose: a closed circuit with no exit to a better life.

Will escape ever come for the Coens’ most blighted fool, damned by a faith he never bothered to regard? Some critics have been optimistic, suggesting salvation in Llewyn’s last interactions with Ulysses or inferring that he is wiser despite getting no further.

But consider the last line. Llewyn clutches side in excruciating pain, having no doubt forgotten a prescient threat from a man he never took seriously. “Au revoir,” he sarcastically salutes to his attacker, in the language Santería has been practiced in for centuries in the French Caribbean. He thinks he’s won by enduring limbo longer, miserably unaware of his comment’s literal translation: