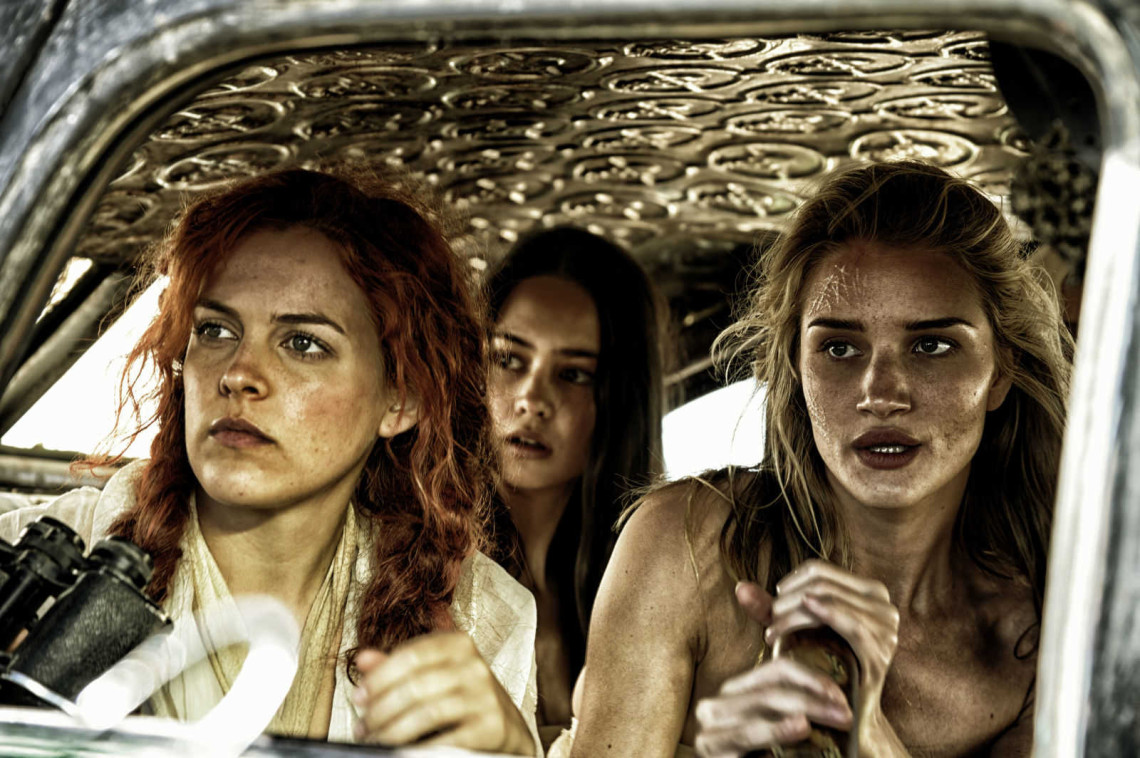 “We Are Not Things”: Women as Depicted in “Mad Max: Fury Road” & “Transformers”

There is a scene early in George Miller’s Mad Max: Fury Road in which a woman is shown scaling Imperator Furiosa’s war-rig tanker to enter the cab. The audience is bound to assume this woman is part of the precious cargo stolen from the tyrannical self-proclaimed deity of the Citadel, Immortan Joe. For this quick scene, Miller and cinematographer John Seale employ a standard wide tracking shot with the camera craning from right to left, keeping the woman in mid-frame. Two things are revealed here: 1) this woman is clearly beautiful; and 2) she is scantily clad, dressed in a gauze-like bikini. But what struck me most about this sequence, in the two times I’ve seen this film since its release last week, was Miller’s choice of where to cut. As the camera finishes swooping around the woman, her outfit blows violently in the wind and as her body is about to be exposed, a glare from the sun fills the frame to obscure her body. After a few brief action cuts, the film then cuts to the interior of the cab, in which we see the woman—The Splendid Angharad—speaking with Furiosa.

This is an R-rated action blockbuster—a film that, just a few minutes before, revealed Immortan Joe’s breast-milk chamber where multiple women are hooked up to breast pumps like factory cows. And yet, Miller chooses to cut before exposing Angharad.

To explain why I find this particular bit of technique so fascinating, let’s talk about Rosie Huntington-Whiteley, the actress who plays her.

She was signed as a Victoria’s Secret model in 2006, and in 2010 became an official Angel. After Michael Bay directed her in a Victoria’s Secret ad, he offered her a role in Transformers: Dark of the Moon (2011) as a replacement for Megan Fox. Dark of the Moon is her only film credit other than Fury Road—and the different ways she is introduced in both Bay’s and Miller’s films tell you all you need to know about how they both view her, and maybe even women in general.

After some Autobot exposition and CGI clanging-and-banging to set the stage, Dark of the Moon cuts to a woozily twisting camera following a woman’s slow ascent up some stairs. All she wears is a men’s button-down shirt and lacy panties. There are four specific cuts in that scene, all shots of her legs, butt cheeks, and the front of her torso. There’s even a lens flare as in Fury Road, yet here it’s used as a halo to illuminate her rear. We hear her say “My hero, wake up” to the jobless, penniless Sam Witwicky (Shia LaBeouf) before we finally see her face.

Compared to Huntington-Whiteley’s introduction in Fury Road, Bay’s lens here evokes the spirit of a boozy frat boy whose brain cells have been replaced by links to PornHub. There are no character details here, no import to the narrative. In his review of Dark of the Moon for The Atlantic, Christopher Orr cuts to the core of the objectification on display: “Bay’s lens leers so emphatically, almost pornographically, that this opening can’t help but come across as a statement of his philosophy of gender.” Judging by the way he shoots Huntington-Whiteley throughout this film, Bay’s philosophy doesn’t seem too far removed from Immortan Joe’s: women are commodities. 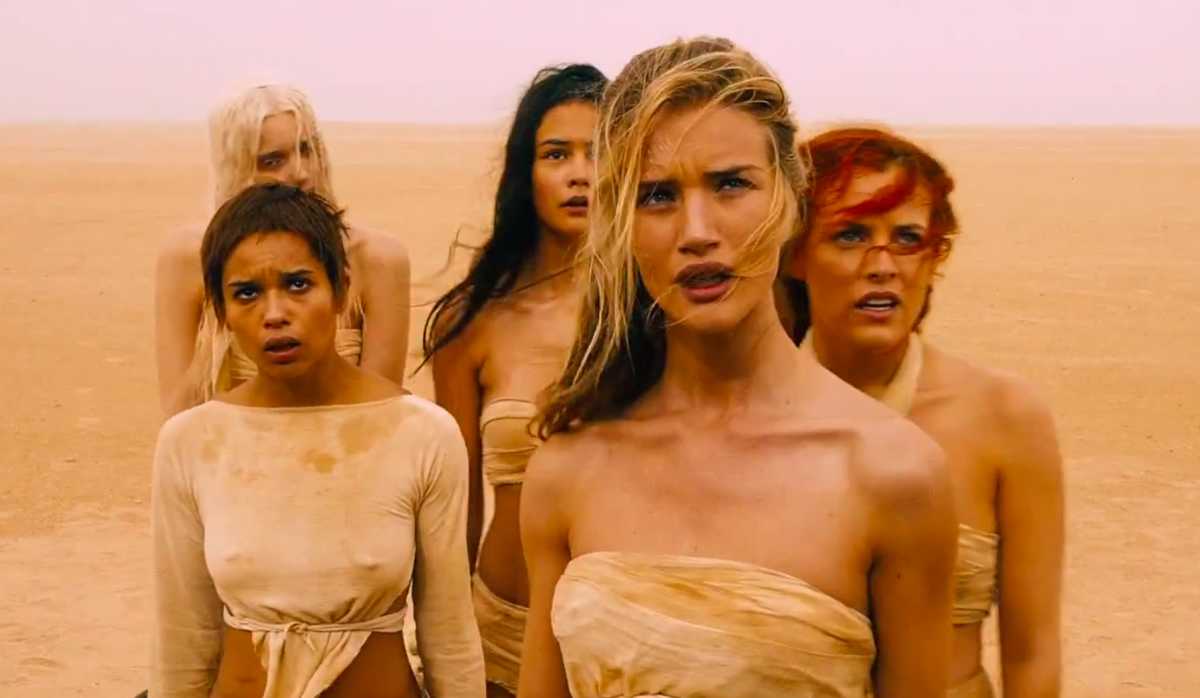 The dystopia of Fury Road is a world of base, dehumanized commodity—a land completely descended into a mutated, inbred patriarchy. Huntington-Whiteley’s character, The Splendid Angharad, is one of Joe’s five “wives” or “breeders,” and each of them is dressed throughout in gauzy wisps of clothing. The scene when the women are introduced could have been nothing more than vulgar objectification, but like Huntington-Whiteley’s scene earlier, Miller’s gaze remains blessedly dignified. Max, serving as audience surrogate, rounds the war rig to find the five women hosing each other off. We notice their clothing and cleanliness, especially as juxtaposed with Furiosa and Max’s dingy states, all of which suggest they are not of this grimy desert world. When Max sees them, it’s made clear that he lusts not for them but for the water pouring from the hose. Even as scantily clad women bathe in the desert, Miller doesn’t allow his camera to leer as other action directors may; instead, he emphasizes simple details that reveal character.

This same scene contains a key moment for Huntington-Whiteley’s character. With Max pointing his gun at her, Furiosa instructs Angharad to bring him the hose. Angharad begins carrying the hose to him, and the camera cuts to a close tracking shot of her once-billowing clothing now clung wet to her very pregnant belly. For Immortan Joe, these women are objects in which he places his power-hungry fantasies, marked and deemed worthy by their wombs; a wet pregnant belly in the Citadel is essentially the equivalent of a wet T-shirt at a Spring Break bash in Panama Beach. But Miller pointedly denies us similar instant gratification; there is a vast divide between Miller’s turn-ons and his characters’. Not only is a sexist trope thus subverted, but Huntington-Whiteley’s body is used to tell the story, not titillate audience lust.

It’s startling to contemplate that this is the same actress who, in Transformers: Dark of the Moon, was reduced to an over-produced series of upskirt shots. But therein lies the power of a camera to evoke the sensibilities behind it. Actors are in a sense all objects, part of a film’s mise-en-scène yet still human. In stepping behind a camera, seeking to capture portraits of life, filmmakers face deep philosophical questions: Where in these frames does the story lie? How do I bring dignity to the real-life humans within this fabricated world? How shall I shape an audience’s vision? What is beauty?

George Miller and Michael Bay answer these questions with starkly different presumptions about the world and human worth, and this is evident in the way each uses Rosie Huntington-Whiteley. I wouldn’t have seen her as a human being if not for Miller’s camera. By contrast, left to Bay’s mind, she would have remained a doll in his Hollywood playhouse. When I think about Rosie Huntington-Whiteley’s performance in Fury Road, I’m reminded of the wives’ words scrawled out on the cave walls within which Immortan Joe kept them imprisoned: “We are not things.” It’s the rebel yell of the objectified, a jab at the male gaze at its most debasing.