Color is one of the most evocative and immediately arresting aspects of film composition. Its use can be psychological, emotional, fantastical, realistic, or anything else filmmakers wants it to be. Every week, Palette Cleansers spotlights a film whose use of color is as aesthetically striking as it is intellectually stimulating.

Jacques Tourneur’s first color film (and his first Western), 1946’s Canyon Passage, shows the filmmaker instantly exerting a control over this new component of his filmmaking. A subtle director, Tourneur makes suitably nuanced use of color, primarily through the costumes and production design, but also the general tone of a shot. For most of the film, the color is naturalistic, earthen and muted, almost unremarkable. Nevertheless, Tourneur always communicates important aspects of each character and their perspective in each shot, and the color of Edward Cronjager’s cinematography can say just as much when it is barely evident as when the color occasionally lapses into florid expressionism. 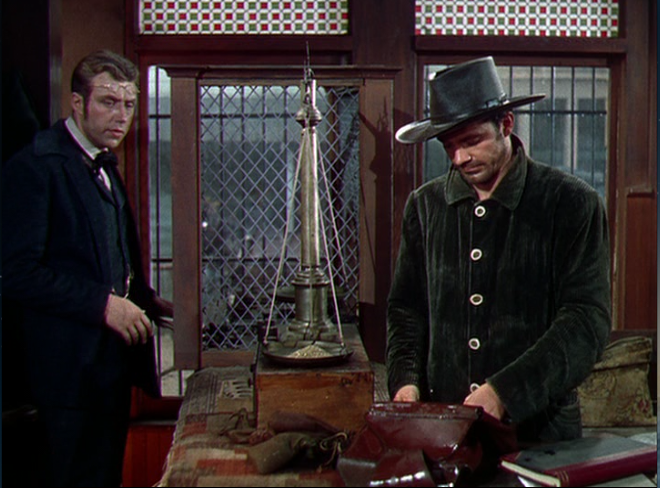 Logan is a driven man, an entrepreneur who seeks to become a successful businessman simply for its own sake. His worldly nature can be seen in this early shot, in which he makes a sizable deposit of gold dust with too much casualness for the bean counter Cornelius. Their dialogue fleshes out Logan’s character, but so too does the general tone of the shot and its color. Cornelius is clad in the deep blue of an official, while Logan’s slightly worn, forest-green coat speaks to his affinity for the elements. The otherwise unadorned lighting and color reflects his personality: plain and straightforward, which the shots tend to reflect that when he is on screen.

Compare that to the shot that helps introduce Logan’s best friend, the inveterate gambler and dishonest money-keeper George (Brian Donlevy): 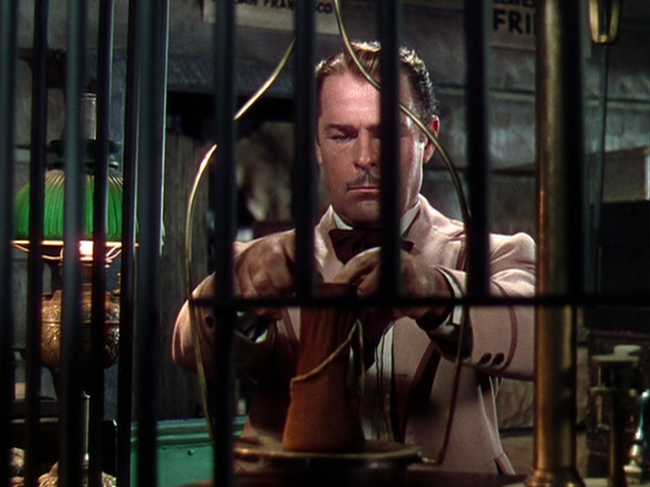 Even setting aside how the camera placement in the separate money rooms contrasts the friends—Logan views gold as just another part of his business routine, while for George it becomes a prison—the richer colors and deeper textures they conjure shows the film drifting not merely to another character but altering the frame to see through this new person. The darker, fuller greens and golds clearly symbolize the hypnotic pull greed has on George, but it is hard to deny that this projection of George’s inner thoughts is so much more tempting from an aesthetic viewpoint than the dim colors that flow from Logan’s eyes.

The more stylized projections of George’s POV carries over to his view of women. We meet his fiancée-in-everything-but-name, Lucy (Susan Hayward), through Logan’s subjective but somewhat honest perspective, which makes George’s time with Lucy almost look like a second introduction: 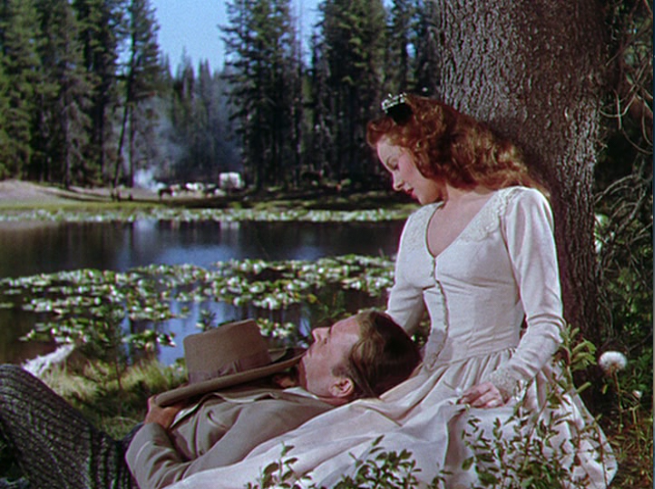 With sunlight glinting off the water and sprigs of green cocooning Lucy in her virginal white, she becomes a beacon for George’s equally powerful desire to escape the forces tempting him. Those tempting forces, incidentally, are equally manifested in a shot of the married woman he illicitly propositions: 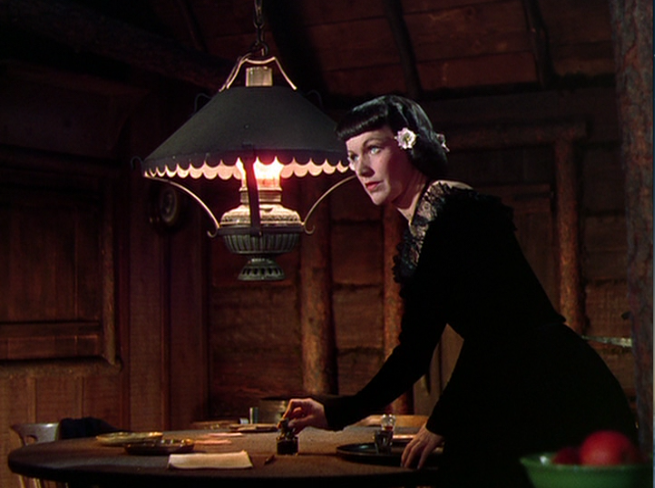 This eyeline match practically casts Rose Hobart as an object. She even looks like the lamp, its black shade covering white light mirrored by the raven hair around her face. The green bowl with red apples in the corner even helps to equate the woman with the poker game that enraptures and ruins him. Various tricks of light and pointed costume differences hint at Logan’s romantic preferences elsewhere in the movie, but George went ahead and made himself a Madonna/whore complex.

The best display of color, however, is reserved for the intrusion of Native Americans into the white settlers’ dense arcs. Tourneur heightens the Native Americans’ Otherness Tourneur: when members of the area’s tribe interrupt a wedding, Tourneur makes the “redskins” even redder through a garish depiction of firelight, obvious in its pulsating falsity but dynamic in how it further colorizes people of color. In this shot, the Native Americans are made almost abstract in the effect they have on the whites’ perspective. 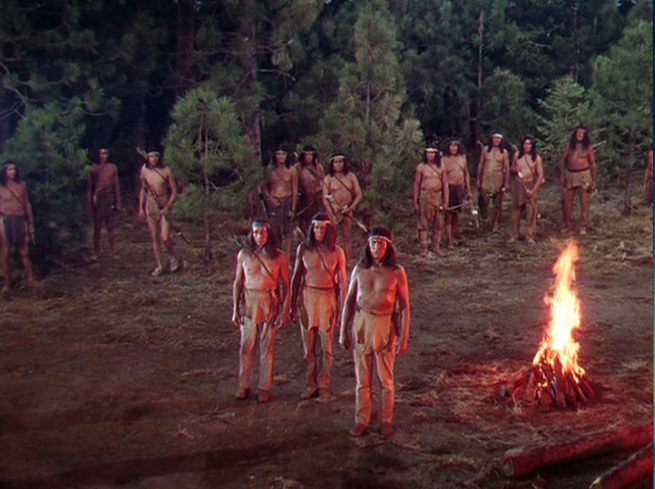 That use of red is echoed in the film’s climax, which boldly wrests the film from Logan’s hands to let truly wronged parties get their vengeance. Tribal warriors hunt down Logan’s nemesis, Bragg (Ward Bond), whose desperate run is framed with leaves of autumnal yellow-red. A medium-shot looking directly at Bragg lets the audience know he is surrounded because Tourneur totally encircles Bond’s face in those leaves. 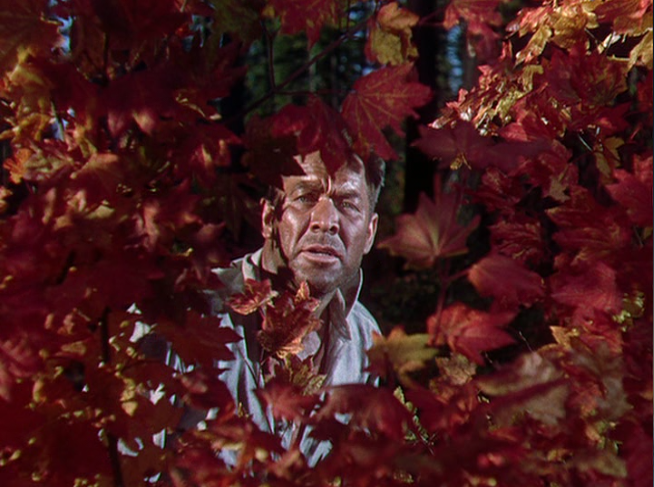 Canyon Passage’s color may be only intermittently striking on its face, yet it is the shifts in palettes more than any other element of the technical craft that best clarifies the film’s dense web of subplots, perspectives and moods. Its elegantly communicative color fleshes out psychological and thematic issues both wholesome and subversive, anticipating the Western’s coming golden age and its even more brazen, occasionally even experimental, displays of colorized style and substance. Barely 90 minutes long, Canyon Passage contains a wealth of information in its ostensibly simple story of a simple man’s simple desires, and, counterintuitively, it is the always changing color patterns. above all else, that make this work a cohesive whole.