Justine Smith writes about "One-Eyed Jacks" and the work of Marlon Brando as the film arrives on the Criterion Collection.

By the time Marlon Brando made his directorial debut One-Eyed Jacks in 1961, a new wave of westerns was just on the horizon. Ushered in partially by the bleak noir-inspired westerns of the late 1950s like Ride Lonesome, The Searchers and Terror in a Texas Town, Brando’s vision of the west was psychologically heavy and burdened by brooding emotions. In many ways, his works would predate the New Wave westerns of Monte Hellman and Sam Peckinpah, who would reinvent the genre for a new and more troubled age over the course of the next two decades. Recently released for the Criterion Collection, One Eyed Jacks reflects the tumultuous reputation of its lead and ushered in a new masculine ideal.

As a genre, the western has always wavered between myth and dream. Reflective of the American psyche, its prominence seems to rise and fall with public perceptions and anxieties around national identity. As one of the medium’s earliest genres it came to represent the promise and risk of the open frontier in its earliest decades, only to give way to the disillusionment with the promise of the land and the insecure reality of America’s unequal society. The west of the screen never quite matched the reality and even the so-called “revisionist” westerns of the past three decades that sought to redefine the brutality and open up the point of view could never quite escape the lens of colonialism or cast away the genre’s melodramatic tropes. The best westerns have always been the ones to tackle the legend head-on, deconstructing and building up myths about America and about the identity of men and women on the frontier. 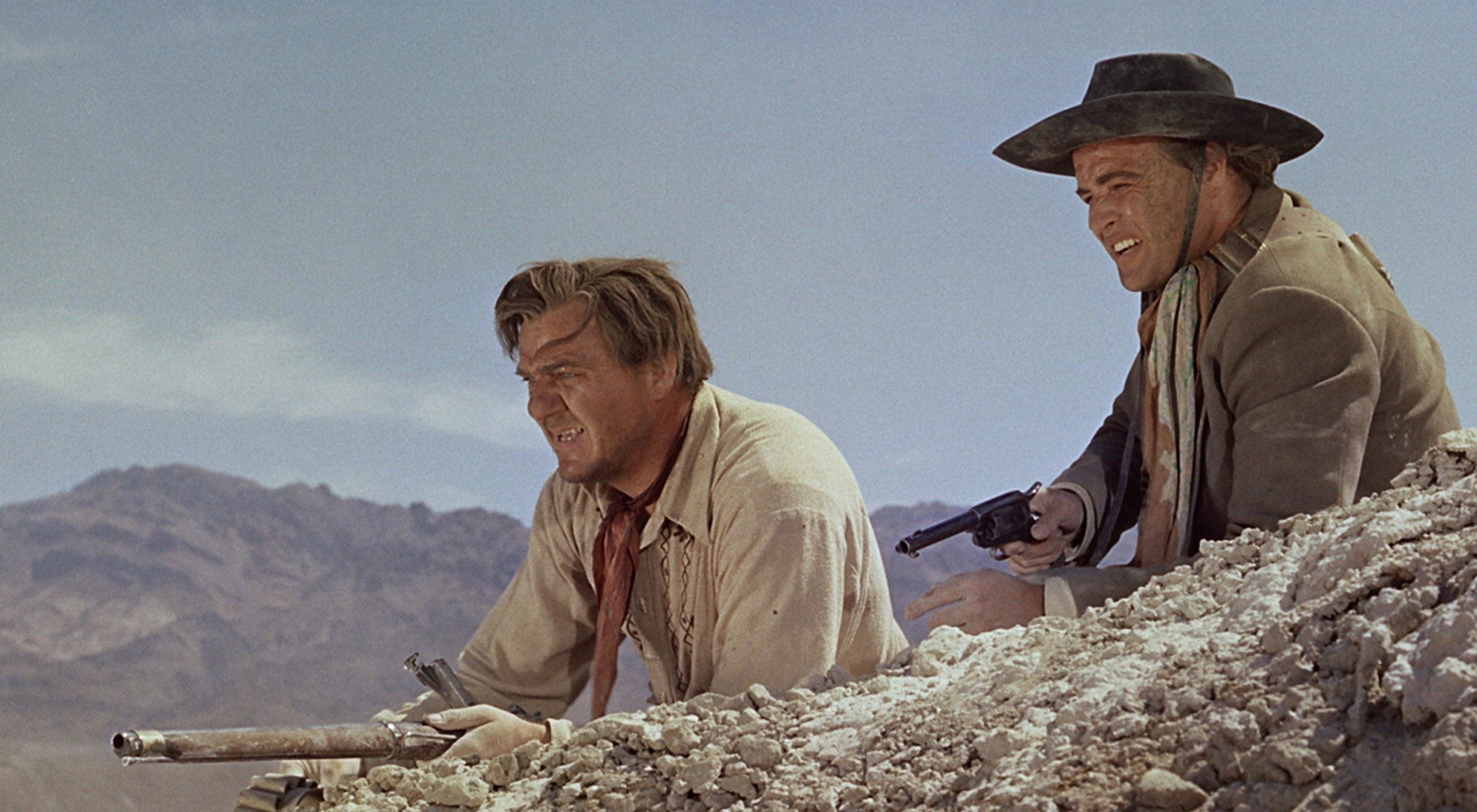 Along with The Night of the Hunter, One-Eyed Jacks might represent one of the best one-off directorial effort for an actor. Bizarre, obsessed and idiosyncratic, the film often feels like an extension of Brando’s tortured reputation. In a story of betrayal and flawed masculinities, Brando stars as Rio, a bank robber betrayed by his partner “Dad” Longworth (Karl Malden) after they rob a Mexican bank. Rio is captured and left to rot in a Mexican prison, but he escapes and searches for his partner across the California frontier. With a synopsis that already reveals how the subtext is rendered in the text itself, Brando uses the mythology of the West to explore the fractured masculinities he made famous during the 1950s.

The western was ripe for manipulation for an aesthete like Brando. Focused on dredging up emotions that challenge the perception of manhood as stoic and cold, Brando challenges the image of the quiet stranger riding into town. According to Howard Hampton, who wrote the liner note for Criterion, when Brando took over the directorial effort from Stanley Kubrick, his reputation as “difficult” was already cemented. The project was fraught with post-production woes, and Brando’s perfectionism coupled with the studio’s expectations reflects the troubled making of the film and the even more troubled state of its lead and director. As Hampton says, Brando’s “intimate knowledge of chaotic dysfunction, and extraordinary gift for melding aggression with sensitivity gave him an inside track on the material.” By this time, Brando’s persona on- and off-screen was loaded with carnal impulses that propelled and crippled his fame.

One-Eyed Jacks meanders at times and occasionally latches onto improbable emotional beats but still somehow resonates deeply. Focused on turning the interior outwards, anything resembling subtext becomes the text itself. Early in the film, Dad is eager to return to save his partner in crime – Rio. But while he assembles the horses needed to save his partner, the satchel with his money hits the dust. In that moment, with the gold glittering on the ground, he reconsiders saving his friend. Malden hangs over his saddle, manipulating gold coins between his fingers and decides to escape, leaving Rio to be captured. The scene lacks nuance as the internal conflict that Dad experiences is unambiguous and clear – yet the moment resonates. Malden, giving into an unambiguous emotional beat explores deftly the “truth” of that emotion in that moment and situation. In the stylized performative rhythm of Brando’s work and direction, moral ambiguity is cast aside in favor of emotions laid naked and bare. 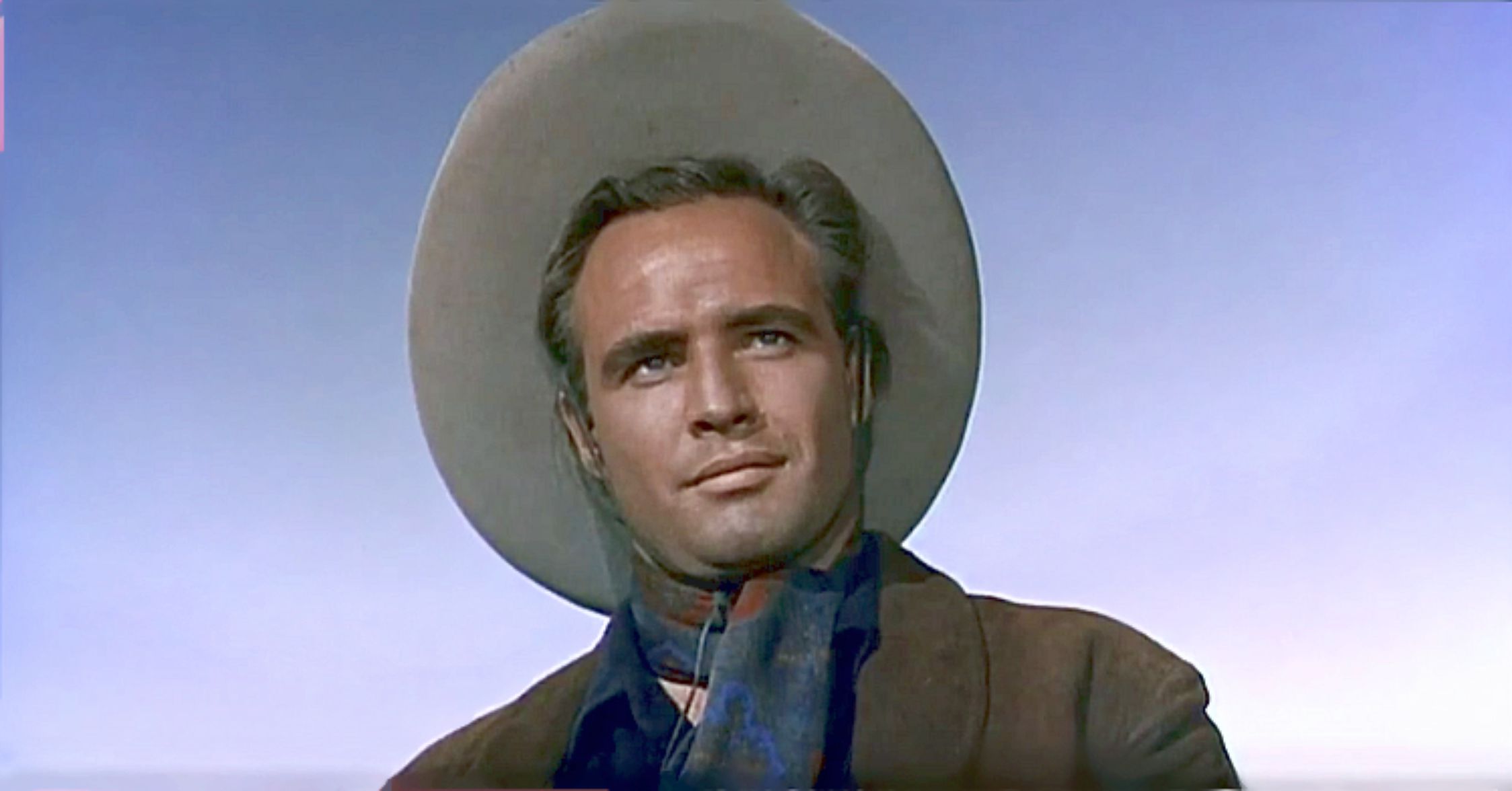 This decision runs contrary to the masculine milieu of restraint that marked the westerns before the 1960s. While some headway was made over the past couple of decades, notably in films like Red River, overt emotional expressions were still perceived as somewhat alien, perhaps even, un-American. This seems to be why Brando leans quite heavily on the Mexican “atmosphere,” for better or for worse. It’s as if the film itself were in conflict with the image of the stoic American cowboy, and can only come alive with Spanish speakers who defy easy stereotypes of earlier depictions but who are still drawn sketchily. The exoticism of Mexico was a fascinating departure from the white-washed Hollywood that precedes it but it still feels fetishistic. Playing into the idea of the “fiery” latina, One-Eyed Jacks suggests a greater openness and sensuality given to the Mexican characters that finally wavers into stock stereotypes. With a kind of in-awe colonial perspective, Brando seems to hang his emotions on Mexican characters as if they hold some greater emotional truth that American actors have long repressed. The takeaway is something that feels of the past and forward thinking at once, a portrayal loaded with problems and insights.

With vast Technicolor scenes, the contrast between wide landscape and tight emotions showcases one of the great advantages of widescreen cinema. Over the course of the 1950s, filmmakers like Nicholas Ray proved the widescreen format was better suited to emotional outbursts and characters in conflict with their environment than the epic scenes they were seemingly designed for. Brando toys with these ideas through framing choices that isolate characters within the greater landscape or in how he uses depth to suggest power within the scene. A few years later, Sergio Leone would prove that close-ups truly fill the screen in wider formats, but for Brandom, medium shots stood in for more intimate compositions, allowing a fuller range of the actor’s body, often in stasis, to unveil greater emotional depths.

One-Eyed Jacks premeditated the most sullen and introverted westerns of the upcoming years. Redefining masculinity by leaning hard on emotions and Freudian trappings, the film isn’t about heroism or frontierism in the same way as westerns that preceded it. Rather, it utilizes the lawless landscape as a means of exploring emotions and relationships unchecked by our social mores. In this unguarded landscape, where “men can be men,” Brando questions what manliness really is. Rather than referring to the past, he looks towards the future, presenting emotions as text, challenging the idealization of masculine repression onscreen.