“Nymphomaniac” and “Grey Rape” in Entertainment

There is no rape in Nymphomaniac: Volume I. Except there is. Or at least, one could read that into it. While I don’t completely subscribe to the “Death of the Author” theory, I do believe that it’s possible to read an interpretation into a piece of work besides that which the creator has in mind for it. When Lars von Trier wrote Nymphomaniac: Volume I, I don’t believe he thought of one particular episode of the story as depicting rape. Nor did he think of it as such when directing that scene. Nor, I think, did any of the actors involved. But it can be seen as a rape, regardless of the intent.

The incident in question takes place around a half hour into the film. At this point the protagonist, Joe (Stacy Martin), is in the throes of overwhelming youthful lust. She and her similarly horny best friend B (Sophie Kennedy Clark) enjoy playing a “game” on train rides. They compete to see who can seduce more male passengers into sexual encounters before reaching the final destination. The winner earns a bag of chocolate sweets. During this sequence, Joe discovers the power she has over men: how the right look and question can draw seemingly anyone in. Seligman (Stellan Skarsgard), the intellectual to whom a present-day Joe (Charlotte Gainsbourg) narrates her life, compares the game to fly fishing. That’s how strong these girls’ allure is – they don’t even have to hunt for men, just dangle some bait.

But there is one man who seems impervious to their advances. A middle-aged passenger (Jens Albinus) helps the girls out of a bind when they’re caught without tickets, paying for both their fares. But he rebuffs their offers to “thank” him afterward. B proposes to give Joe, lagging behind in points, an automatic win for the trip if she can land him. Joe begins by doing something she hasn’t with any of her other conquests: she gets to know him. She learns that the man is trying to conceive a child with his wife, and that he’s rushing home to meet her, since she’s ovulating. Joe assumes that this is why he didn’t have sex with her and B. He responds that, “It isn’t because [he] didn’t want to,” though whether this is an affirmation that he would otherwise have been responsive to their advances or simply a statement that “wanting” it doesn’t really factor into his decision to not have sex with strangers on a train isn’t clear.

Joe draws closer to him, despite his visible discomfort. As she brushes aside his newspaper, touches him, and undoes his pants, he repeatedly says “no,” “please don’t” and other protestations. At one point, he attempts to push her hands away, but she brushes him aside, and eventually performs oral sex on him. He looks anguished rather than pleasured throughout, though he does not resist her. It’s all over within a minute, and after lingering on the aftermath for a few moments, there’s a cut to B handing the bag of chocolates over to a triumphant Joe.

The intended meaning of the scene is clear. It demonstrates Joe’s nigh-on-supernatural influence on men. She conquers this man despite his drastic resistance. His mind doesn’t want it, but he succumbs to his body. For Joe, there seems to be no separation between physical desires and conscious reasoning. Present-day Joe considers this story an example of how, from a young age, she was willing to hurt others for the sake of her own satisfaction. Seligman denies this, though, suggesting that “relieving [the man] of his load” might even have helped him conceive a child.

But while Joe’s only sin in dispute is the temptation of a man away from fidelity to his wife, neither of them consider the idea that having sex with someone who doesn’t want it is in fact rape. Which isn’t surprising, since very few viewers seem to think so as well. Of the many conversations that have sprung up around the film, few of them have discussed the train sequence as anything other than what I have already expounded on as to its meaning.With research, I have found only one article that identifies what happens in this one scene as rape.

As that article points out, anyone who viewed a hypothetically reversed version of the scene, in which a middle-aged man forced himself on a young woman, would unhesitantly call it a rape. But of course, different power and gender dynamics would be in play in such a scenario, so it isn’t a perfect explanation. What if only the genders were switched, but the situation remained the same, with a virile young man approaching a middle-aged woman? Still, that would likely send outrage throughout the movie-viewing community.

Von Trier is familiar with such rumblings, given that several of his previous films have dealt with the rape of women. But this is, again, a different beast. You could ask why the man, who is probably physically stronger than Joe, simply doesn’t push her away. I’d argue that Joe has psychologically dominated him, and indeed, he seems almost petrified throughout the scene, but that’s my subjective take on it. But again, it’s not a question anyone would ask in the case of the opposite scenario… unless they were a Republican policymaker. 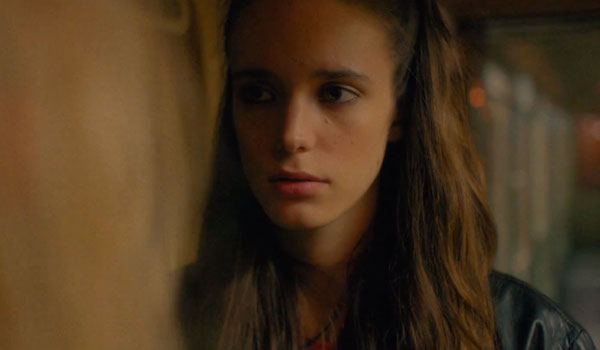 I should make it clear that I don’t believe that anyone who doesn’t see this as rape is “wrong.” Indeed, such viewers are really processing the scene as von Trier (presumably) wanted them to. Like much of the sex depicted in the movie, Joe’s encounter with the man is matter-of-fact and distinctly un-erotic. Whether you view his experience as rape or not, it causes obvious distress in the man, and is not portrayed in a positive light. What I find interesting is that it apparently never occurred to anyone making the film that it was rape, and that so few critics and other audience members have seen it as such. And I think that speaks to a common perception of what rape is.

There’s an ugly presupposition in mainstream culture that men can’t be raped by women. The phenomenon is indeed rare, and obviously far less common than the rape of women by men or of men by other men, but it does occur. According to a CDC study, “one in 21 [men] said they had been forced to penetrate an acquaintance or a partner, usually a woman; had been the victim of an attempt to force penetration; or had been made to receive oral sex.” But such scenarios are almost never seen in fiction, and when they are, they are either accidental or played for laughs.

There’s Wedding Crashers, in which Vince Vaughn’s character awakens to discover that Isla Fisher’s character has bound and gagged him while he slept, and she proceeds to have sex with him. He even calls it a rape the next day, but has fallen in love with her by the end of the film. Horrible Bosses uses as a recurring joke Jennifer Aniston’s unwanted advances towards Charlie Day. She drugs him and takes pictures of them in compromising positions at one point as blackmail. In 40 Days and 40 Nights, Josh Hartnett’s ex-girlfriend jumps on him while he’s restrained and has sex with him over his protests so that she can win a bet that he’ll break his no-sex-for-lent rule. In an episode of Desperate Housewives, a woman drugs a man with Viagra and sleeping pills so that he can use her to impregnate herself, and the entire scene is one big joke.

Hell, in X-Men Origins: Wolverine, we learn that Logan’s girlfriend, Kayla Silverfox, is a mutant with the power to make anyone she touches do what she says, and that she purposefully drew him into a relationship on orders from the main villain. Their relationship was sexual, but no one ever considers that since he never really had a choice in the matter, their encounters were against his will. One could argue that Logan would gladly have had sex with her anyway, but his free will was not in play.

And that’s at the core of this attitude: the idea that no man would really turn down sex, given the option. It’s an incredibly backwards mindset, one that reduces men to their libidos. That and a pervasive culture of suck-it-up machismo are why it’s difficult for male victims of rape to come forward about their trauma. You see it every time a news story pops up about a female teacher having sex with a male student – jokes about how men wish they had teachers like that when they were in school, ho ho ho. Unintentionally, entertainment that use rape as such a punchline or simply don’t fully think through its implications props up this toxic environment.

Regrettably, the most vocal advocates for male rape victims tend to be Men’s Rights Activists, who erroneously lay the blame for this hostile cultural attitude at the feet of feminists. But this is a side effect of patriarchal values through and through. And I’d be remiss if I didn’t point out that women have it much worse.

Consider Revenge of the Nerds, in which a girl is having sex with whom she believes to be her boyfriend, only to discover halfway through that it’s actually one of the eponymous nerds, making a revenge play against said boyfriend. But she shrugs it off because apparently he’s just such a good lover. That’s just a completely anti-human response. Worse is Sixteen Candles, in which the main love interest hands his girlfriend over to a nerd while she’s passed out drunk, inviting him to “be [his guest]” with her. It’s not upsetting, though, because she’s a bitch. And afterwards, while she states that she doesn’t remember what happened that night, she thinks she liked it. So that makes it okay, right?

It’s not a new trend, either. In Gone With the Wind, Rhett roughly seizes Scarlett, forcibly kisses her, and then carries her up the stairs to their bedroom, saying that, “this is one night you’re not turning me out.” The next morning Scarlett awakens in bliss. The “It’s not rape if she enjoyed it” trope crops up in other media, from High Plains Drifter (the first thing Clint Eastwood does in town is force himself on a woman) to The Fountainhead (“If it is rape, then it is rape by engraved invitation”). For anyone not familiar with the term, this is what feminists are talking about when they refer to “rape culture.” It’s been ingrained in us for a long time, but that doesn’t mean it’s in any way acceptable.

But bring it back around to Nymphomaniac, which at the very least isn’t treating rape lightly, whether or not you agree that it’s there at all. I referred to this ambiguity as “grey rape” in the title of this article. It isn’t quite an accurate use of the term (which, by the way, refers to a myth – rape is pretty cut-and-dry), but it was the closest one I could think of. Importantly, I think that this view still fits comfortably with the themes at play in the rest of the movie, though it may be incongruous with von Trier’s aim for the scene. It shows how sexually aggressive Joe is, after all, and the lengths she’ll go to in filling her cravings.

What I’m asking is that viewers be more alert in their viewing habits. It’s not that there are reams of sex scenes in entertainment that are asking to be reinterpreted as rape. But I believe that viewers should be more proactive in calling out rape when it happens, even if (especially if, actually) the filmmakers don’t see it as rape. If audiences make that kind of push, then they could shape the culture in a positive way, even if it’s just a little bit.