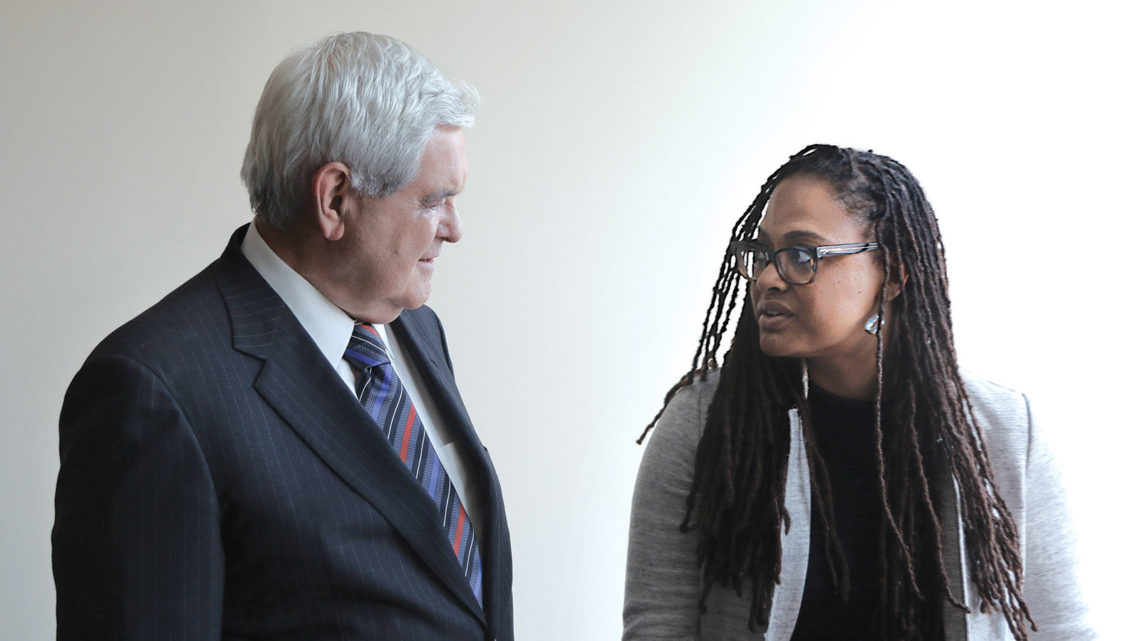 Vikram Murthi submits this review from the first night of the New York Film Festival, on the new Ava DuVernay film "13th."

Ava DuVernay’s documentary 13th uses the key clause/loophole in the 13th Amendment—“…except as a punishment for crime whereof the party shall have been duly convicted”—as the primary thrust for her thesis that slavery is still perpetuated in America through racial inequality in the criminal justice system, specifically mass incarceration of black males. Talking-head interviews with academics and activists of all walks of life coupled with damning archival footage function as evidence for DuVernay’s argument that White America’s implicit biases has stymied racial progress and the false conception of a “post-racial” U.S. Yet DuVernay’s film also purposefully serves as a primer for post-Jim Crow African American history, a wake-up call to apathetic citizens to the lived experience of modern racial oppression, and an indictment of politicians, red and blue, and corporations’ knowing involvement in preserving white hegemony through any means necessary.

In short, 13th covers a lot of ground, and easily contains the groundwork for nine or ten different documentaries about any number of the film’s pet issues—dog-whistle politics in the Nixon and Reagan administrations, racist sentencing laws, the nefarious actions of the American Legislative Exchange Council (ALEC), etc. DuVernay initially structures the documentary chronologically, taking us through Reconstruction all the way to the present, but soon jumps between many of the racist ills plaguing the country today and eventually the nationwide response to systemic oppression, e.g. Black Lives Matter. Though most effective in its first half when it traces the historical causes that led America to have 25% of the world’s prisoners, 13th succeeds at piercing through ingrained White hypocrisy by immersing the audience in the casual evils perpetrated by national leadership.

Much of the credit for the efficacy goes to editor Spencer Averick, who manages to coherently string together a compelling moral and political analysis of 150 years of American history. On face, this reads like the literal job description required for the film, but the complexity of DuVernay’s investigation and the scrutiny of multiple histories renders it a difficult task. Averick excels at keeping 13th nimble and pointed, spending just the right amount of time on every development while communicating the cause-and-effect relationship between each of them without belaboring its significance. DuVernay and Averick crucially engage the audience with an editing strategy similar to an essay film, maintaining the integrity of the intricate argument yet conveying through an accessible filter.

However, 13th’s barbed archival footage operates as the main linchpin to DuVernay’s argument. Some of the powerful imagery will be familiar to those aware of the Civil Rights Movement, but that awareness won’t negate their effect, especially when shown in succession, complete with passionate commentary from knowledgeable subjects. Scenes of a dignified older African American male picking up his hat every time he’s pushed by racists or key footage from D.W. Griffith’s The Birth of a Nation will likely incite winces from White audiences, but they don’t compare to speeches from former presidents Nixon, Reagan, H.W. Bush, and Clinton, all of whom, in one way or another, have the blood of Black bodies on their hands. 13th is designed to provoke, but it isn’t meant to be provocative, at least not in the traditional sense of that word. It serves as a timely reminder about the failings of our recent history, how hopeless the future feels to many oppressed citizens, and how far the culture has to go when it comes to racial understanding. The footage exists as historical documentation, but DuVernay employs it to shock people out of complacency.

The film does suffer from some creative missteps. Its less-successful second half hits the gas on so many ideas that it’s occasionally difficult to keep track of every single point DuVernay and her many compatriots make, no matter how essential they are. Like many historical essays before it, 13th has the “too much” problem where it tries to touch on so many different issues that it can’t help but feel overstuffed on some level, as if DuVernay and Averick had trouble deciding what to keep in and what to leave out. This is a “good” problem to have, as each individual issue undoubtedly deserves the coverage, but it still tends to bring the film down in spots. There are other flaws here and there—redundant musical interludes, the repeated hard cut to the word “criminal” on a black screen whenever someone utters it, possibly too many talking heads—but they’re relatively minor in the grand scheme of DuVernay’s project.

As many have said and will say, 13th is a timely film considering the recent national spotlight on racial protests, police shootings of unarmed black men, and systemic oppression. It will likely garner a large and impassioned audience because of its relationship to current events, as well as its availability on Netflix beginning October 7, but it’s important to emphasize that the documentary would be “relevant” regardless of its release date. DuVernay has created a vital introduction to a section of modern history of which many are ignorant, and its probable social utility cannot be ignored. That 13th largely works well as a film is the cherry on top of the proverbial sundae.